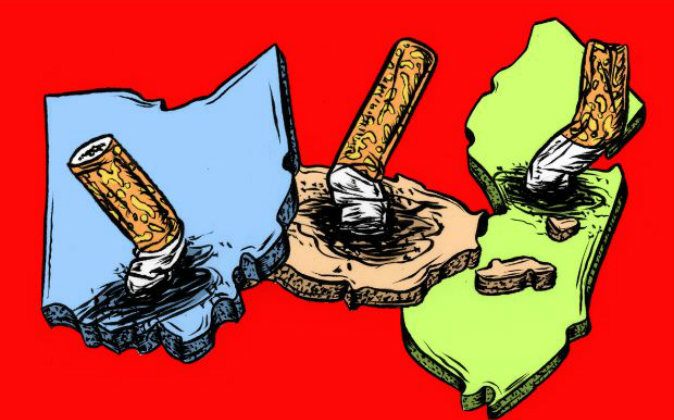 Politicians wanted upfront cash from a legal victory over Big Tobacco, and bankers happily obliged. The price? A handful of states promised to repay $64 billion on just $3 billion advanced.

This story was co-published with Marketplace.

In November 1998, attorneys general from across the country sealed a historic deal with the tobacco industry to pay for the health care costs of smoking. Going forward, nearly every cigarette sold would provide money to the states, territories and other governments involved — more than $200 billion in just the first 25 years of a legal settlement that required payments to be made in perpetuity.

Then, Wall Street came knocking with an offer many state and local politicians found irresistible: Cash upfront for those governments willing to trade investors the right to some or all of their tobacco payments. State after state struck deals that critics derided as “payday loans” but proponents deemed only prudent. As designed, private investors — not the taxpayers — would take the hit if people smoked less and the tobacco money fell short.

A ProPublica analysis of more than 100 tobacco deals since the settlement found that they are creating new fiscal headaches for states, driving some into bailouts or threatening to increase the cost of borrowing in the future.

One source of the pain is a little-known feature found in many of the deals: high-risk debt that squeezed out a few extra dollars for the governments but promised massive balloon payments, some in the billions, down the road.

These securities, called capital appreciation bonds, or CABs, have since turned toxic. They amount to only a $3 billion sliver of the approximately $36 billion in tobacco bonds outstanding, according to a review of bond documents and Thomson Reuters data. But the nine states, three territories, District of Columbia and several counties that issued them have promised a whopping $64 billion to pay them off.

Under the deals, the debts must be repaid with settlement money and not tax dollars. Still, taxpayers lose out when tobacco income that could be spent on other government services is diverted to paying off CABs. And states can’t simply walk away from the debt — bondholders have a right to further tobacco payments even after a default.

“It’s going to cost taxpayers, either directly or indirectly,” said Craig Johnson, an associate professor of public finance at Indiana University in Bloomington who has studied tobacco bonds and CABs. “I don’t doubt that at all.”

ProPublica’s analysis is the first to measure the magnitude of the high-risk debt involved in the tobacco deals and to calculate how much Wall Street’s dealmakers earned. It also shows how much of the tobacco money has been securitized — that is, turned into payments that go to investors. As of this year, at least one out of every three dollars coming in under the settlement is pledged to investors, according to bond disclosures and payment data from the National Association of Attorneys General, which tracks the flow of funds.

The sure winners so far: Investment bankers from Citigroup, the now defunct Bear Stearns and others who, along with consultants and lawyers, have pocketed more than $500 million in fees for their financial engineering, ProPublica estimates. They now stand to make more as the governments look to rework old deals and try to get even more tobacco cash upfront.

In part, the troubles in the tobacco bonds arise from the same kind of miscalculation that led to the housing bubble.

Just as mortgage lenders bet that home prices would keep rising, the tobacco deals relied on optimistic predictions of how much Americans would smoke. Forecasters rightly saw that cigarette sales would continue to decline, but now the yearly drop — about 3 to 3.5 percent — is nearly double what was cooked into the deals.

Because the bonds sold to investors can stretch 40 years or more, the outdated estimates mean an ever-widening gap between what states expected to collect under the settlement and the payments they promised investors.

The CABs promise gigantic payouts — as high as 76 times what’s borrowed — because nothing is due on them for decades. Meantime, interest compounds on both the principal and accumulating balance.

Defaults by state and local governments are rare, but rating agencies have been warning that tobacco bonds in general could go under en masse. Moody’s said in May that up to 80 percent of the tobacco issues it tracks are likely to default.

“They’re doomed,” said Jim Estes, a finance professor at the California State University, San Bernardino, who helped ProPublica analyze the bond documents. “It’s not a question of whether or not, it’s a question of when.”

The first state to act was financially strapped New Jersey. In March, it rescued two CABs that were part of a larger 2007 deal. The CABs promised to repay $1.3 billion in 2041. To pay off that giant tab before it comes due, the state agreed to hand over $406 million of its remaining tobacco proceeds beginning in 2017, money that otherwise would have gone into state coffers.

Barclays handled the transaction for New Jersey and earned $4.5 million. The state also got $92 million in upfront cash out of the deal to help Gov. Chris Christie and lawmakers plug a budget deficit. Still, rating agencies weren’t impressed: They downgraded the state anyway, making it costlier for New Jersey to borrow.

In late July, Rhode Island announced a plan to buy out some holders of $197 million of CABs it sold in 2007. The deal would shave $700 million off a $2.8 billion tab due on the bonds in 2052 and let the state refinance some of its older tobacco bonds at more attractive interest rates. Now, some bondholders are suing to block the deal.

Most of the deals involving CABs sold right before the 2008 financial crisis, ProPublica found. As the horizon darkened, the market for them began falling apart, with one lone buyer keeping Wall Street’s CAB machine going. Pitch documents show that bankers pressed the states to act fast before the window shut.

“We are confident that we can stimulate demand,” Bear Stearns bankers told Ohio prior to a $5.5 billion tobacco bond package championed in 2007 by then state Treasurer Richard Cordray, who these days heads the U.S. Consumer Financial Protection Bureau.

Ohio’s tobacco deal was the largest ever. It included CABs that brought in $319 million in return for an eventual $6.6 billion balloon payment — a nickel on the dollar. Bear Stearns, Citigroup and other Wall Street firms made about $23 million in fees on the transaction, according to the bond offering document.

Then there is Puerto Rico, a government with a long history of financial woes.

In April 2008, as Bear Stearns was collapsing, it closed a $196 million tobacco bond sale that saddled the Puerto Rico Children’s Trust, a fund set up to benefit island families, with an eventual $8.6 billion balloon payout. Bear Stearns and Citigroup made $1.4 million in fees.

This year, Puerto Rico’s tobacco settlement receipts fell 13 percent below what was forecast when the deal was done. The commonwealth is also struggling to prevent defaulton a mountain of other debt. Officials there did not respond to written questions, phone calls or interview requests.

Critics have repeatedly lambasted the states and other jurisdictions for violating the intent of the tobacco settlement by spending the money on uses other than anti-smoking programs and health care.

“The securitization scheme not only accelerated the expiration of the usefulness of that money, but basically guaranteed that it would never be used for its conceived purpose,” said Dave Dobbins, an executive with the American Legacy Foundation, a nonprofit created under the settlement to fund smoking-prevention programs.

“Now the money’s gone, the securitization scheme is sort of coming home to roost for some people … and the tobacco problem is still there: 480,000 people [are] expected to die this year due to tobacco-related disease,” Dobbins said.