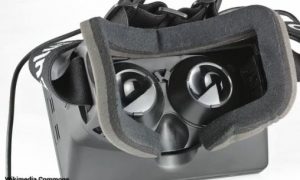 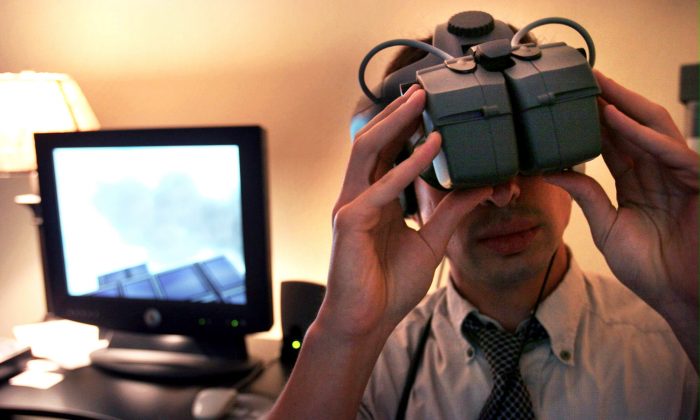 In the world of therapy, cures often resemble vaccines, but in reverse. Vaccination works by injecting a person with a weak form of the virus to instill immunity for a disease. In therapy, patients are often guided to experience weaker forms past traumas or general fears.

For problems caused by a past traumatic experience, patients are often encouraged to simulate certain elements of the event that triggered their fear.

Now, researchers are using game engines to construct virtual reality scenarios that simulate those past traumatic events as a form of exposure therapy, which are experienced through virtual reality (VR) headsets such as the Oculus Rift.

VR therapy has been around since the 1990s, although recent technological breakthroughs in VR engines and the emergence of companies like Oculus have fueled a renaissance in the field.

“In the early ’90s you had the first wave of virtual reality—a lot of vision but not enough technology, the equipment wasn’t really there,” said Albert Rizzo, a professor of psychiatry at the University of Southern California. Rizzo has worked with and done research on VR engines for therapeutic purposes for more than two decades.

Even in VR therapy’s earliest days, treatments already existed for acrophobia—the technical term for fear of heights—which, although crude, often got the job done. The VR machine would simulate the view of looking downward while standing in a glass elevator, and patients would find their fear of heights ameliorated afterward.

“If you look at the early stuff, you’d never mistake it for the real thing, but people still reacted to it as if it was [real], back in 1995,” Rizzo said.

Since then, more sophisticated VR scenarios have been developed, offering treatment for war veterans that suffer from post-traumatic stress disorder (PTSD) that seeks to emulate the sights, sounds, and even the smell of war.

A 1999 study of the effects of a Virtual Vietnam program found that 34 percent of patients experienced a decrease in clinical-rated PTSD after being exposed to simulations of a Huey helicopter in Vietnam and a clearing in the jungle. An open clinical trial for a Virtual Iraq program conducted a decade later found that 16 out of the 20 participants no longer met the military criteria for PTSD after the therapy.

Much of the advancement that VR therapy in the last decade has come from the game industry, which has produced progressively more advanced game engines in a highly lucrative market. Rizzo himself uses Unity 3D, a cross-platform game engine, to design many of his scenarios.

“They’re constantly getting better, more intuitive to use, you don’t need to be a programmer,” Rizzo said. “As VR becomes more of a commodity, that’s a market for more content.”

The arrival of Oculus VR, which has further mainstreamed VR headsets, has boon for the VR therapy. According to Rizzo, Oculus Rift headsets offers a wide degree field of view, extremely high resolution, far less lagging, and physical comfort for the forehead.

“It is a leap,” Rizzo said. “They raised the bar and now others are following.”

The exponential rise in graphic fidelity has also been accompanied by a dramatic decline in the cost of VR gear. A head monitor was around $2,500 in 2000, but now you can get an Oculus developer set for $350.

Oculus Rift Future: What Will Facebook Do With Virtual Reality?

The affordability of VR technology not only means expanded therapeutic access for patients, but better adherence to the treatment—people are more likely to continue with a program if they can perform large chunks of activities at home instead of at the clinic.

The Future of Virtual Reality

As graphic engines become more powerful, virtual reality could one day become not just a simulation of reality, but its visual doppelganger. However, even if VR scenarios became indistinguishable from reality to the eye, another frontier remains in the question for total immersion—the sense of touch.

“That’s the hard challenge, people have experimented with exoskeletons that adjust your ability to move,” Rizzo said. “The ultimate vision is bodysuits [that have] sensors that simulate your body that are similar to how a real touch would.”

“But that’s science fiction,” he added.

Rizzo’s more hopeful about the application of VR to social psychology, such as testing how much people’s confidence is affected by their perceived height, or how they would behave in a war zone, so as to filter out ill-suited candidates.

“It’s like with astronauts,” Rizzo said. “The selection involves lots of stress testing that spins you around 1,000 revolutions a minute and see if you throw up.”