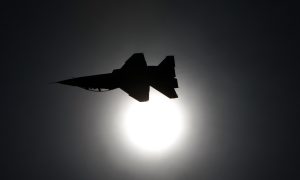 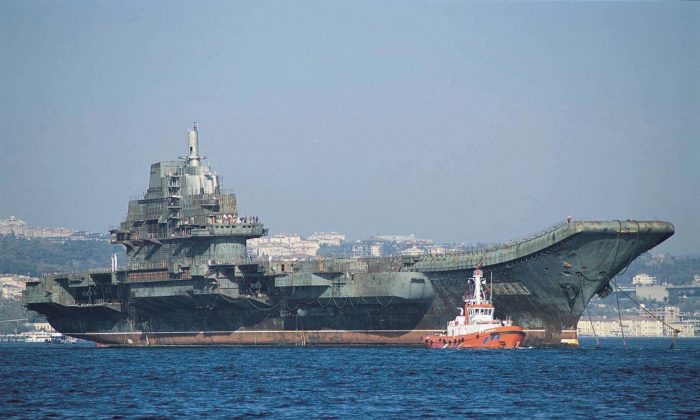 Varyag, the Soviet aircraft carrier purchased by the Chinese regime and relaunched in 2012 as the Type 001 Liaoning, before refitting. (Public Domain)
China

In 2012, the People’s Liberation Army Navy launched its first aircraft carrier, the Liaoning. The project attracted close interest from the media and experts, as the Liaoning was built in Ukraine in the twilight of the Cold War, before being sold to China in 1999, originally on the condition that it would not be refitted for military use.

Instead, the Liaoning, formerly named Varyag, became the basis for the Chinese communist regime’s ambitious program to design and deploy its own aircraft carriers. The sale and refit of Varyag fit into an important post-Cold War trend: Ukraine, which inherited much of its outsized defense industry and development firms from the former Soviet Union, has increasingly come to view China as its main client.

Varyag, originally named for the city of Riga before its first rechristening in 1990, was laid down in 1985 at the Black Sea shipyard and launched in a partial state of completion in 1988, when Ukraine was part of the Soviet Union. When the Soviet Union dissolved in 1991, progress on the unfinished ship was halted.

At the end of the decade, Varyag was sold to a shell company based in Hong Kong for just $20 million, a fraction of what the technological and military potential of the carrier was worth.

The Hong Kong-based South China Morning Post reported that while a “Hong Kong businessman” involved with the purchase had promised that Varyag would not be used for military purposes—the ship was ostensibly to be converted into a floating casino, as with a smaller Soviet carrier that is now a Chinese theme park—the sale also came with a full set of technical documents weighing 20 tons. The technical data represented three decades’ worth of development and experience in Soviet carrier-building.

In 2005, the Chinese authorities transported Varyag to Dalian, a major port in northeastern China’s Liaoning Province, to have it rebuilt by the Dalian Shipbuilding Industry Company. The carrier was relaunched in 2012 under the name Liaoning.

The sale of the Varyag only represented the beginning of major cooperation between Ukrainian defense firms and the Chinese Communist Party (CCP). To make further breakthroughs in aircraft carrier technology, the CCP also tried its best to attract Ukrainian experts to come to China.

According to an article by China.com published in September 2017, senior Ukrainian maritime engineer Valery Babich moved from Ukraine to China to work for a Chinese shipbuilding company. The article referred to Babich as being the “father” of China’s first generation of aircraft carriers, represented by the “Liaoning,” as he had participated in the design of all aircraft carriers in the Soviet Union, including the Varyag, and was the chief architect of aircraft carriers at the Black Sea Shipyard for many years.

Although Chinese state media has never disclosed whether and when Babich started to participate in the construction of Chinese aircraft carriers, a proclamation issued by the Shandong provincial government in 2014 provides a hint.

In February 2014, the provincial government of Shandong Province, located in northern China across the Yellow Sea from Dalian, included Babich on its “List of Experts on the Blue Industry Plan of Mount Tai Scholars.”

Most likely, other Ukrainian experts are involved as well, since the CCP is willing to spend large sums to attract talents. According to the details listed in the “Mount Tai Scholars Plan,” key researchers, of which Babich would likely be an example, were eligible to receive millions of yuan in tax-free development subsidies and income.

Following the launch of Liaoning, the Chinese navy began work on a similar ship, the Type 001A. Featuring improved design and technology, construction of Type 001A started in late 2013 and was commissioned less than four years later on April 26, 2017. The time frame coincides with the period in which Babich and possibly other Ukrainian experts, as reported by Hong Kong’s Phoenix News, were likely recruited by the Chinese regime to assist in naval development.

According to the China.com report, the Chinese enterprise that Babich joined was China-Ukraine Special Ship Research and Design Academy (CUSA) in Qingdao, a port in Shandong. According to its homepage, this company was established in September 2014 by joint efforts of the Qingdao municipal government and the Shandong Academy of Sciences on the Chinese side, with Ukraine’s Black Sea Ship Design and Construction Bureau a collaborating partner.

As much as 700 million yuan ($104 million) was invested in CUSA. Its stated mission, as previously listed on its website, was to recruit Ukrainian ship design experts to join the company, make use of advanced ship design technology from Ukraine, and to design and build “special ships” in the city of Qingdao.

News that Babich may have been working for the Chinese naval industry aroused controversy following reports in Russian and Ukrainian media. In a subsequent article, the CCP-controlled tabloid Global Times claimed that Babich’s son had denied the reports that his father was employed at a Chinese company. Meanwhile, sensitive information regarding the issue was removed from the website of the Shandong provincial authorities and the CUSA.

Apart from carriers, the People’s Liberation Army Navy has taken great interest in the development of advanced destroyers with modern radars and weapons systems—played up in CCP-controlled propaganda as a “Chinese Aegis Destroyer.” Like many other cutting-edge technologies, however, the Chinese regime has relied on imports and copying to field its latest designs.

According to the Kanwa Defense Review, the shipborne phased-array radar, which serves as the “eyes” of the destroyer and is the most crucial part of the “Chinese Aegis,” was developed based on the blueprints provided by the Ukrainian Kvant-radiolokatsiia Radar System Research Institute. In the 2000s, Chinese development of the gas turbines used on large naval vessels also came from Ukraine, according to a March 2011 article by the state-owned China Youth Online.

Other military technologies China has acquired from Ukraine include aircraft engines, “Bison” hovercrafts, Kh-55 air-launched nuclear-armed cruise missiles, and the NITKA carrier-based aircraft training simulator. In September 2017, the Chinese regime’s internally circulated news reports, known as “internal reference,” said that as of 2012, China had begun cooperation with Ukraine in more than 30 categories of development involving more than 2,000 military technology projects from Ukraine.