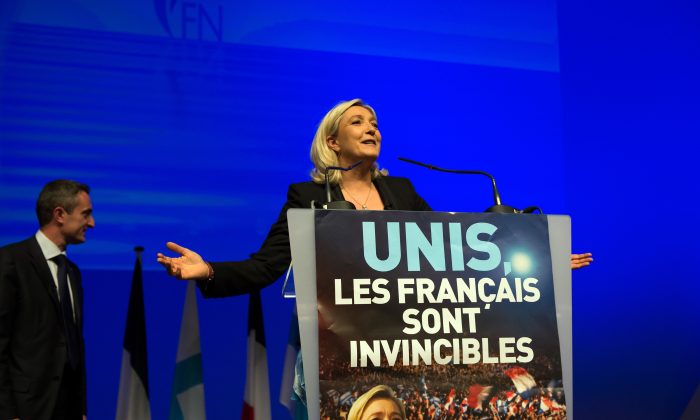 How Two Sides of the Atlantic Approach Immigration

The National Front, a French political party that emphasizes opposition to immigration, did surprisingly well in the country’s local elections in March. Polls suggest that in the upcoming elections for the European Parliament in May the National Front and other anti-immigration parties across the European Union—in Great Britain, the Netherlands, Finland, and elsewhere—will also gain support.

On the other side of the Atlantic, the U.S. Congress remains stuck in a bitter, yearslong stalemate over the reform of American immigration laws. In an era of greater cross-border movement of people than ever before—215 million people lived outside their countries of birth in 2011, an increase of 50 percent over two decades—immigration has become a major and contentious political issue in the world’s wealthiest nations.

Surprising, but Not Surprising

In one sense this is surprising. Immigration, like two other elements of globalization—cross-border flows of goods (trade) and money (finance)—brings economic benefits to the recipient countries.

Indeed, the countries of Europe need immigrants. Low birthrates, which fall below the replacement rate of 2.2 live births per female all across the continent, are creating aging societies with shrinking workforces and, ultimately, declining populations. To sustain economic growth, they need to import what they are not producing: people. The United States has benefited from its immigrants since the 18th century—many of the high-tech firms in Silicon Valley were started by immigrants, most of them from Asia.

In another sense, however, the backlash against immigration should not occasion surprise. Human beings are not simply part of a country’s economy, although they are certainly that. They are also the building blocks of society, the bearers and shapers of its customs, rules, traditions, and institutions. While economic concerns can and do generate political conflict over immigration as they do over trade and finance, the stiffest political resistance stems not from economic grievances but from the fear that the large-scale influx of foreigners will change the social fabric in unwelcome ways. Immigration provokes angry opposition when natives feel that they are in danger of losing their social bearings and being transported against their will to a strange new world.

That is happening on both sides of the Atlantic. But there are also differences between America and Europe—in the cause of the backlash against newcomers, the politics of the issue, and the likely future of immigrants and immigration.

The resistance that the French National Front and similar European political parties embody stems from the fact that not all of the continent’s immigrants have become integrated into their societies. To the contrary, some have segregated themselves from their native neighbors and do not identify with the countries in which they live. Governments inadvertently encouraged this through policies of “multiculturalism,” which put a low value on learning the local language, adopting the local customs, and absorbing the local values. The impulse to live apart also came from within the communities of immigrants, especially those of the Islamic faith.

The United States has attracted many more immigrants than Europe, for far longer, and has done much better at assimilating them. The fear that immigrants will change the national culture has arisen in America as well as in Europe, but the current political backlash has a novel characteristic. It has drawn much of its energy from the fact that many of the people coming to the United States from Mexico and Central American entered the country illegally, by sneaking across its southern border.

In the second decade of this century as many as 12 million people fit this description. They provoked resentment because they had, in effect, stolen something valuable, something to which they were not legally entitled, something that millions of people outside the Western Hemisphere as well as citizens’ ancestors had patiently pursued by legal means: residence in the United States.

The politics of immigration differ on the two sides of the Atlantic as well. The political cleavages over the issue in Europe tend to divide not so much the left from the right as the political elites from much of the rest of society. A 2010 book written by Thilo Sarrazin, a governor of the German central bank, titled Deutschland schafft sich ab—“Germany Is Abolishing Itself”—illustrated the cleavage. It argued that immigrants were doing serious damage to Germany and advocated restrictions on immigration.

The book provoked two telling reactions. The public bought the book, making it the best-selling volume by a German author in a decade. The political establishment responded differently: Sarrazin was fired from his position at the central bank for having given voice to unacceptable ideas.

Mainstream political parties across the continent, conscious of Europe’s brutal 20th-century treatment of minorities, have, like the German central bank, often considered opposition to immigration outside the bounds of acceptable policy. This has left the issue to less well-established, less respectable parties such as the French National Front, which is the reason the political fortunes of such parties have prospered.

In the United States, the division over illegal immigrants runs not between the two major parties but within each of them. Within the Democratic Party, Hispanic groups and professional politicians have sought to confer legal status and eventually citizenship on the illegals out of ethnic solidarity in the first case and the belief that the beneficiaries will vote for Democrats in the second. Labor unions, on the other hand, an important part of the Democratic coalition, resist such generosity because immigrants are willing to work for low pay and in so doing depress the wages of union members.

Many rank-and-file Republicans oppose legislation granting legal status to illegal immigrants because they do not want to reward law-breaking. Many businessmen in industries such as meat processing and construction, by contrast, who also support the Republican Party, employ such immigrants to lower costs and raise their profits.

Finally, the future of immigration looks different on the two sides of the Atlantic. The political backlash against it will be less powerful and enduring in the United States than in Europe. Americans, after all, are accustomed to immigration. Immigrants built the country. They have strengthened and enriched it in the past, and there is good reason to believe they will continue to do so.

The evidence suggests that, rather than forming separate enclaves as some Muslims in Western Europe do, Hispanics in the United States are assimilating in much the same way that previous waves of immigrants did. Moreover, the volume of illegal immigrants decreased at the end of the first decade of the 21st century, by some accounts stopping entirely.

By contrast, European countries will struggle to integrate their immigrants as successfully as will the United States: The resistance to immigration on the continent is therefore likely to grow in the years ahead and with it the popularity of anti-immigration political parties. Europe, unfortunately, is all too likely to have the worst of both worlds: fewer immigrants than it needs economically, but more than it can tolerate politically.

Michael Mandelbaum is the Christian A. Herter professor of American Foreign Policy at The Johns Hopkins School of Advanced International Studies in Washington, D.C. He is the author of the new book “The Road to Global Prosperity” (Simon & Schuster), from which this essay is adapted. © 2014 The Whitney and Betty MacMillan Center for International and Area Studies at Yale.