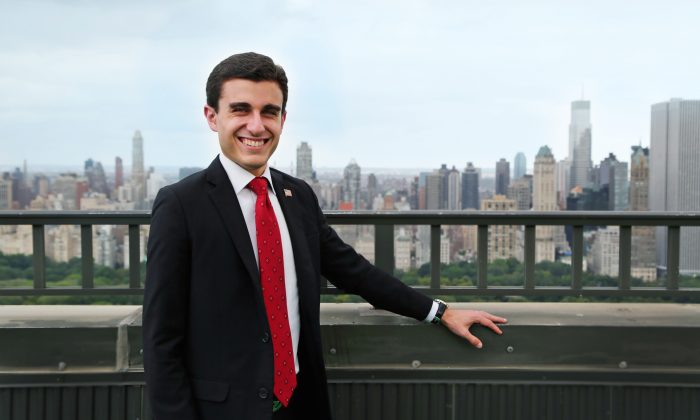 "When you are talking about persuasion or influence, it is really all about relating to people and seeing things from other people’s perspective." (Pinsi Lei Photography)
Business & Economy

How to Work New York

When you meet Richard, it’s hard not to feel intimidated.

At the age of 22, he has managed to build a successful PR agency with 10 employees and 40 clients. He is a contender for Inc. Magazine’s 30 Under 30 ranking for 2014. He sits on numerous boards of think tanks, businesses, and charities. He has speaking engagements all over the country. Currently Richard Lorenzen is CEO of Fifth Avenue Brands in New York.

But when he talks about his passion for business and the way he got to where he is now, money, titles, and material success fade into the background. You realize Richard is just somebody who followed his dreams and had the right tools to go about it.

Tell us about Donald Trump.

Did you get a lot of help from your parents?

No I didn’t. My dad is a lieutenant in the fire department in New York City. My mother is a writer who just had her first romance novel published.

I started the PR firm specifically to move into real estate later. But now this firm has grown so much, this has become the dream. I love running companies in general—that’s what I have discovered. Whether it’s real estate or PR, that’s what I like to do.

But you didn’t start with PR right away.

My first company was Internet marketing, content writing for Internet. Then we grew and evolved into full-service Internet marketing. So we did search-engine optimization and all that stuff. And that’s when the business really took off.

What were the challenges you had to overcome?

When I was building my company, I was just building it off imagination because I didn’t know how real marketing firms did it. I didn’t know the processes, the systems. So I was just coming up with it as I went along and then tweaking it based on the results of what I was getting.

That was a huge difficulty in the beginning because you think you are doing it the right way but you don’t even know when you are doing it wrong. So not having the right people around as role models and mentors was very difficult. So I learned everything through books. John Maxwell made a big impact on me. Jim Rohn, Darren Hardy, Brian Tracy. But beyond the books, I didn’t have any real-life experience of watching people and how they do it.

This process of continued learning and improvement is a big reason for your success?

I had a lot of success when I was younger, but the problem was it wasn’t consistent. A lot of it was by chance. I happened to be in the right place at the right time to meet the right client.

Some months we would make a lot of money, some months we won’t. So when I was around 19 or 20, I really started to take personal development seriously. I implemented what I read and started applying it, completely changing the way I lived.

One of the books that had the biggest impact on me was Darren Hardy’s “The Compound Effect,” which basically changed everything about how I structure my life. He advocates structure and the discipline, so I changed my habits and improved my discipline.

That changed everything for my business because the consistency changed. We did better, but every single month and everything became more predictable.

One of the big things he teaches—and that changed a lot for me—is how you structure your mornings and how you structure before you go to bed. Before I never put any thought to that. I just got up, did whatever and worked, and that was it.

I get up at 4:30 a.m. and spend 20–30 minutes reading every single morning: journaling, listening to audiobooks, or watching educational videos. Personal growth and education became much more important to me overall.

Because I get up so early, I don’t even celebrate New Year’s. It is a big deal to me because there are plenty of goals to reach in the new year. Twelve months ahead of unlimited potential. The only way to really seize that is to not violate the discipline.

Habits are so important. I found that it takes about two months to really cement a new habit. You can take anybody and look at their habits and see where they are in life. You can figure out their bank balance, all these kinds of things. That’s really what separates you from everybody else; it’s habits.

Then came my first experience with doing PR on a very small scale. Then clients said: Can you also get me into this newspaper. So we started exploring this area more and more.

I love PR because it’s so fast moving. I am a 24/7 news junkie. Personally it interests me; I like how there is always something different every day. And the demand was there from the clients. We started out on a very small scale but scaled up pretty quickly.

So I started building relationships with the press, mainly the old-fashioned way. Reading what they were writing about and seeing what they are interested in.

Tell us about how important people are here in New York.

Living in New York, you have the opportunity to be exposed to so many different kinds of people. New York is also very interactive. In L.A., everyone is driving around in their cars; here you can meet people in the street.

Everybody is in the mix, living together; it’s not that departmentalized. In many ways, you can build companies here you can’t build elsewhere because of the people you can meet.

One of the first books I read about relationships was Dale Carnegie’s book “How to Win Friends and Influence People.” That gave me the basic knowledge I needed to start networking.

It had a huge impact on me because it changed the way how I thought about relationship and about leadership. That’s when I was 16 years old. So I read all these leadership books.

You can build a business just by being a people’s person alone. Charles Schwab, who ran U.S. Steel, didn’t know a single thing about steel, but he was making $1 million per year because he could deal with people.

When you are talking about persuasion or influence, it is really all about relating to people and seeing things from other people’s perspective.


What is your biggest fear?

A big fear for me is to sacrifice an enormous amount of time, energy, resources, and overall just a huge chunk of your life, to achieve certain goals and then at the end, you realize they weren’t the right goals or the goals that you really wanted deep down inside.

You sacrifice everything to climb a mountain and then realize it was the wrong mountain. I think the way to prevent this fear from becoming a reality is to constantly be evaluating your “why” behind why you are pursuing each of your goals.

You need the have the right “whys” as the driving force behind what you do if you do not want to have any regrets later on in life. Success is a lot of work, and it needs to be worth it beyond just achieving a level of status.

You already achieved so much, what are you going to do with the rest of your life?

Richard Lorenzen is the CEO of Fifth Avenue Brands, a New York-based PR firm. Richard sits on the board of numerous think tanks, charities, and for-profit organizations.