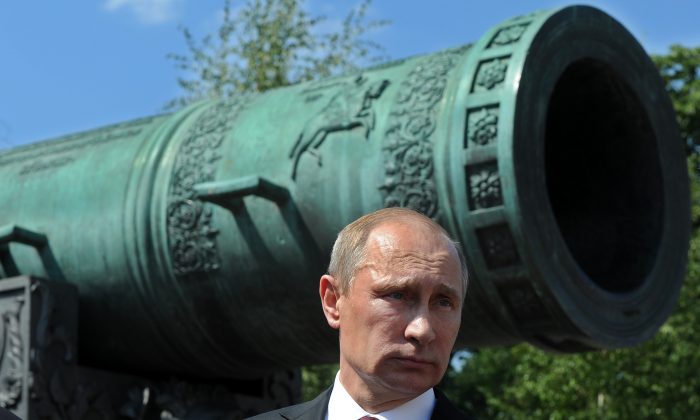 Russia's President Vladimir Putin stands in front of theTsar Pushka (Tsar Cannon), one of the Russian landmarks displayed in the Kremlin in Moscow, on July 31, 2014. (Mikhail Klimentyev/AFP/Getty Images)
Crisis in Ukraine

How to Win Sanctions and (Sometimes) Influence People, Part 2

In light of the Malaysia Airlines tragedy and mounting unrest in Ukraine, the European Union and the United States have moved to impose new sanctions on Russia. But this raises the much bigger question of to what end? Are we actually trying to change the behavior of Vladimir Putin – or simply trying to send a message that we condemn his behavior? Or are the sanctions merely designed to express moral outrage at egregious behaviors about which we can’t simply stay silent and not act?  In other words, will sanctions “work” to reform behavior? Is that even the point?

As I wrote in my earlier Weekly Wonk sanctions piece, sanctions have different purposes in different cases – and may even have multiple purposes in the same case. And so when we ask whether or not sanctions are going to be effective in a particular case, we must first understand and identify the underlying motivations or aims for the situation at hand. Too often, we reflexively slap sanctions on people and places and ask experts whether or not they will be effective without thinking about the motivations and defining what we are trying to accomplish. But if we don’t have a clear understanding of why we’re imposing sanctions and what we are hoping that they will achieve, we can’t really assess their effectiveness.

In most cases, there is a simple desire for justice at the heart of sanctions. We view sanctions as a mechanism by which we can inflict punishment, deter problematic behaviors and mark certain activity as intolerable. The desire to sanction is often rooted in the idea that staying silent and not taking action in the face of certain bad behavior (whether that be lying, cheating, breaking international norms or killing innocent civilians) would be morally unacceptable.

Let’s say changing the target’s behavior isn’t the primary objective. In that case, imposing the most punitive sanction may be the most effective strategy. In the case of NBA Clippers owner Don Sterling, for example, the NBA was probably less concerned about actually reforming Don Sterling’s behavior for future interactions with him than it was about making a statement that such behavior would not be tolerated by the organization. In addition, sanctioning can also damage the reputation of an individual or country and work to raise awareness of the gravity of the problem to other actors – even if the costs imposed aren’t enough to modify a given behavior. So, even if the sanctions do not actually modify the target’s behavior or thinking, sanctions may still make it more difficult for the actor to cause harm or continue the problematic behavior because other actors are less likely to be accepting of such behaviors or trust the actor’s motives.

However, if one of the primary objectives of the sanctions is to modify the behavior of the targeted person or state (as we seem to want to do with regard to Russia), it typically doesn’t work to simply ramp up the economic costs until the sanctioned party breaks down. What happens if Putin is willing to endure increased costs? Or what if the costs being imposed by sanctions are primarily hurting others – like civilians – and not Putin himself? What if the actual costs required to modify Putin’s behavior can’t ever actually be attained in reality because they would also end up being too costly to the U.S. and the E.U.? Lastly, what if significantly increased costs make Putin feel like he has nothing to lose and triggers even more problematic behavior?

Sanctions’ effectiveness – whether in trying to combat terrorism or prevent the construction of nuclear weapons – is by no means a perfect science. However, in the realm of international affairs, research suggests strategies focusing solely on ramping up the costs of economic sanctions tend to fail to change behaviors for a variety of reasons. Tufts University professor Daniel Drezner has described a “sanctions paradox,” arguing that states targeted with sanctions are often primed for failure because they already have higher expectations for future conflict and are therefore more concerned about the longer-term material and reputational losses of conceding to sanctions. As a result, the target is less likely to concede to demands because it fears this will make it lose leverage in future disputes with the state sanctioning it. Drezner’s argument could also apply to terrorist groups with a similar logic, but given that such groups generally have less overall resources available to them than a state, their behavior might be more impacted than states through the imposition of greater sanctions costs. On the flip side, terrorist groups’ generally asymmetric tactics may allow them to still be operational and inflict harm with little resources, so while sanctions might slow operational tempo or modify strategy, it might not change the underlying drivers or truly coerce groups to radically and fundamentally change their behaviors over time.

Other research on sanctions suggests that sanctions are less likely to be effective against autocracies, such as Iran, than against democracies. Under a dictatorship, there’s a more tenuous link between the population – which feels the costs of sanctions most directly – and the regime that has the ability to modify the state’s behavior. That’s why the U.S. has moved towards more tailored and targeted sanctions strategies against specific businesses, individuals and those more directly linked to the country’s decision-making behavior.

So, what does this all mean with regard to the new sanctions on Russia? A strategy of ramping up the economic sanctions on Russia may in fact be necessary to modify Putin’s behavior, but it will certainly not be sufficient in and of itself to change Putin’s behavior. Having said that, imposing additional sanctions may very well be effective in serving other purposes, such as punishing Russia economically, expressing strong disapproval and deterring other actors from adopting similar behavior in the future. However, if the U.S. and the E.U. also seek to modify Russian behavior, a review of sanctions history tends to show us that simply ramping up costs doesn’t always translate into desired political outcomes.

My research looks at the international realm and shows that to change states’ behavior towards desired outcomes you need to truly be willing to talk and engage even when imposing strong sanctions. There needs to be an understanding of the target and a willingness to engage in genuine and authentic diplomacy. In my research, I looked at more than 100 episodes in which the U.S. imposed sanctions on other countries. I found that diplomatic engagement makes sanctions more effective, whereas diplomatic disengagement has the reverse effect. I found that when the U.S. closes its embassy in a targeted country, for instance, the probability that sanctions will fail increases to 73 percent from 42 percent. That’s because engagement produces better intelligence on the targeted country and enhances communication channels. It improves the ability to convey demands, target the correct entities, monitor the impact of sanctions on the ground and calibrate policies over time. Diplomacy also provides a window into the regime’s decision-making processes, motives and vulnerabilities. Increased diplomatic interaction also helps clarify the nature of the demands on a sanctioned country and resolve ambiguity between the parties.

Unfortunately, even when sanctions are crafted perfectly and the U.S. engages in adept diplomacy, success is still not guaranteed. Genuine and honest diplomacy is a two-way street. One party may ultimately continue to deceive the other or lack the self-awareness necessary to take responsibility or have an honest discussion about the disagreement. These pitfalls are not limited to states. Unfortunately, there will always be actors who persist with negative behaviors in light of costs and who evade honest attempts at diplomacy – whether in business, sports, politics or personal affairs.

But even if sanctions don’t always completely achieve their official goals, it doesn’t mean that they’ve completely failed: Smart sanctions strategies may still produce a more desirable outcome than doing nothing at all, albeit sometimes an imperfect outcome. In the case of Russia, the multilateral sanctions that are being imposed will undoubtedly impose costs on the Russian economy. They also signal that the U.S. and the E.U. are not going to sit idly by in light of the recent trajectory of events. They may also make it more difficult for others to cooperate with Russia and they may very well alter Putin’s calculations going forward.

Having said that, Putin may also feel cornered by the recent sanctions and more resistant to change or he might simply continue his behavior because he assesses that the U.S. and the E.U. don’t really have much left in their policy arsenal to threaten in terms of costs. In her recentNew Republic piece on Putin, Julia Ioffe points out in the title that “The West has Cornered Putin – and That’s When He’s most Dangerous.” She writes, “Sanctioning Putin is a gamble. Not because it will adversely affect the American and European economies, but because it’s hard to predict which way Putin’s going to dive.” So, if we really want to maximize our leverage over the direction of Putin’s dive, the heavier the dose of the sanctions, the heavier the dose of diplomacy that ought to complement the sanctions to make sure they have the intended effect.

It doesn’t help matters that the spot for the U.S. ambassador to Russia has been vacant since February. Perhaps the new U.S. Ambassador to Russia who is expected to be confirmed this week can complement the sanctions strategy with some seriously skilled and deft diplomacy. Furthermore, we may very well need a high-level diplomatic summit with Putin and other world leaders to reach some sort of sustainable ceasefire and negotiated political solution to this foreign policy crisis.