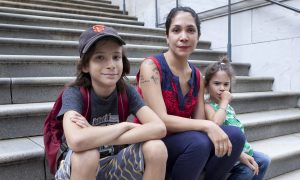 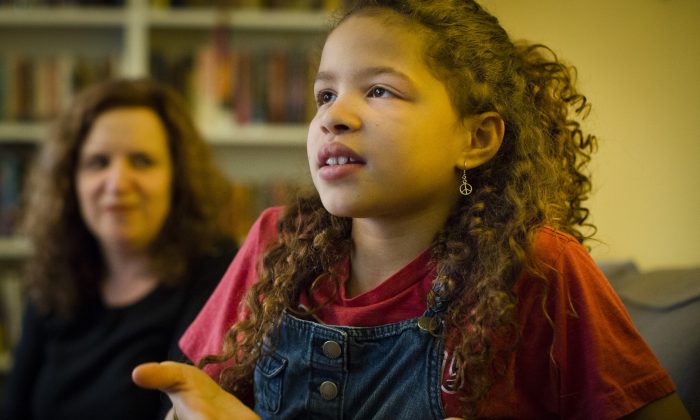 In this Saturday, April 13 photo, Nacala Spiegler-Frederick (R), daughter of Jinnie Spiegler (L), speaks during an interview in their home in the Brooklyn. Spiegler, like many New York state parents, was worried that the standardized tests that third-through-eighth-graders would take would be harder than ever before. (AP Photo/John Minchillo)
New York

How to Talk to Your Child About the New Test Scores

NEW YORK—The latest round of test scores released by the city earlier this month could be cause for concern. Less than one-third of third- to eighth-graders passed the test, and average scores fell significantly compared to last year.

When individual scores become available to parents on Aug. 26, helping them understand the scores, whether they are high or low, can turn this into an opportunity for improvement.

The Epoch Times spoke to education experts about the way parents can discuss the new scores with their children. Every child is different and the advice that follows is only a suggestion.

The recent test was based on a curriculum that is entirely different from anything New York City’s public schools have taught in decades. The test was based on Common Core Standards, which require students to not only solve problems but also explain how they solve them. The new tests require children to think critically.

Most importantly, as with any new test, the first year’s results are just a starting point. Experts, like Aaron Pallas, professor of sociology and education at Teachers College in Columbia University, predicted several months before the results were released that the scores would fall.

“The tests were very hard,” Pallas said, adding that parents can make an analogy “that it’s like being tested on how well you play the piano when you haven’t had any lessons or you’ve only had one lesson.”

Taking this approach may help children tame their anxieties and alleviate negative feelings.

“As we react to test scores that come in that are lower and may be startling, we just want to be sure that we are responding with urgency, but not necessarily overreacting,” said Brown Wessling.

Alfred Posamentier, one of the leading American educators and the dean of the School of Education at Mercy College, advises parents to praise children to some extent, but to make sure to set high expectations for them. Posamentier advises that parents should adapt a forward-looking approach rather than looking back, by saying, for example:

“You will do better this year. This is just a first step.”

“What are we going to do this year that’s different from last year that will make you do better? Because you can do better.”

“One of the most important things parents can do, and teachers as well, is to have high expectation for kids,” Posamentier said.

Parents should also be wary of setting different expectations for English and math, Posamentier added. A classic case is when a parent scorns a child for getting a 75 in English, but is glad that he or she got a 75 in math, thereby setting different standards for different subjects.

“When your parents speak to you, you may have dismissed it, but it sticks with you,” Posamentier said. “How a parent behaves is extremely important.”

Being encouraging and setting high expectations can help children excel.

The new Common Core Standards require children to explain how they did their work, instead of just getting it done. This year is an important time to create a quiet and distraction-free place for children to do their homework and to require, Posamentier advises, that parents ask them about what they did once they are finished with it.

“This is exactly what the Common Core Standards are requiring now,” Posamentier said. “Before you just did it now you have to say what you did.”

But parents should not stop at the surface. If a child explains something that is unclear, parents should ask follow up questions, Posamentier said, which will help clear things up for both parties.