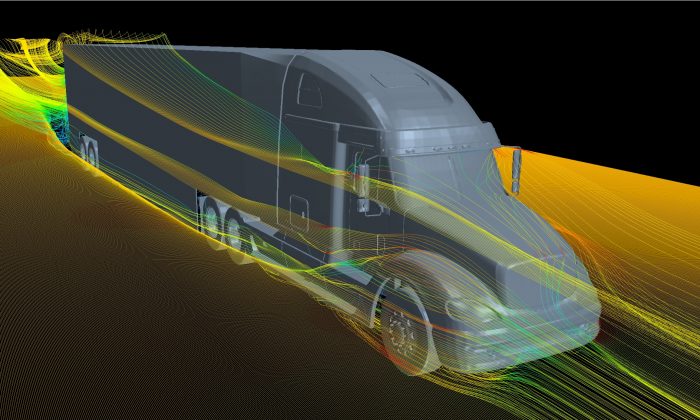 Scientists at Lawrence Livermore National Laboratory study potential of drag-reducing devices on semitrucks to conserve billions of gallons, save tens of billions of dollars and spare tens of millions of tons of CO2. (American Institute of Physics)
Science

How to Save Billions of Gallons of Gasoline

By American Institute of Physics

Each year, the more than 2 million tractor-trailer trucks that cruise America’s highways consume about 36 billion gallons of diesel fuel, representing more than 10 percent of the nation’s entire petroleum use. That fuel consumption could be reduced by billions of gallons a year through the use of drag-reducing devices on trucks, according to studies by researchers at Lawrence Livermore National Laboratory.

Fluid dynamicists Kambiz Salari and Jason Ortega ran aerodynamic tests on a detailed 1/8 scale model of a semitruck in the wind tunnel facilities at NASA’s Ames Research Center at Moffett Federal Airfield in California. The truck was tested in various configurations. In some, it was outfitted with trailer skirts, which are panels affixed along the lower side edges of a trailer that reduce drag resulting from airflow interacting with wheels and other structures under the body of the trailer; in others, a boat tail fairing, a device affixed to the back of the trailer that decreases drag by reducing the trailer wake size, was added. In still other tests, the truck was rigged with both of the drag-reducing devices (or with neither one).

Salari and Ortega found that adding both of the devices — which are currently used in combination on about three to four percent of the nation’s semi-trucks — reduced the aerodynamic drag by as much as 25 percent, which represents about a 13 percent decrease in fuel consumption. “Even a minor improvement in a truck’s fuel economy has a significant impact on its yearly fuel consumption,” Salari said. “For example, 19 percent improvement in fuel economy, which we can achieve, translates to 6.5 billion gallons of diesel fuel saved per year and 66 million fewer tons of carbon dioxide emission into the atmosphere. For diesel fuel costing $3.96 per gallon, the savings is about $26 billion.”

“We are in the process of designing from the ground-up the shape of the next-generation of highly aerodynamic and integrated heavy vehicles to radically decrease aerodynamic drag and improve the fuel efficiency,” Salari said.