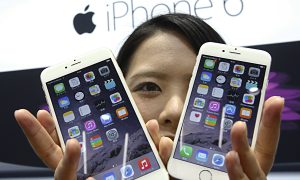 Smartphones are expensive. It’s an inescapable part of living in modern day society, but there are ways to significantly decrease the price of your next smartphone if you know where to look.

PhoneArena notes in a recent article that most carriers offer preowned, refurbished phones at a discount, so whether you’re looking for an iPhone 6 or an LG G3, there’s probably a deal for you.

If you’re an AT&T subscriber, you’re in luck. AT&T has the most extensive selection of preowned device of any of the four major carriers, including the iPhone 6 for $552.49 and the iPhone 6 Plus for $637.49, both without a contract. At the time of writing, AT&T is the only provider selling refurbished iPhone 6 and 6 Plus units.

Verizon’s selection is slimmer than AT&T’s, but some of the highlights include the Galaxy S5 and HTC One (M8), each available for $419.99 without a contract.

Each carrier offers a 90-day warranty on preowned devices. To see all of the best deals that AT&T, Verizon and T-Mobile have in stock, be sure to check out PhoneArena’s article here.