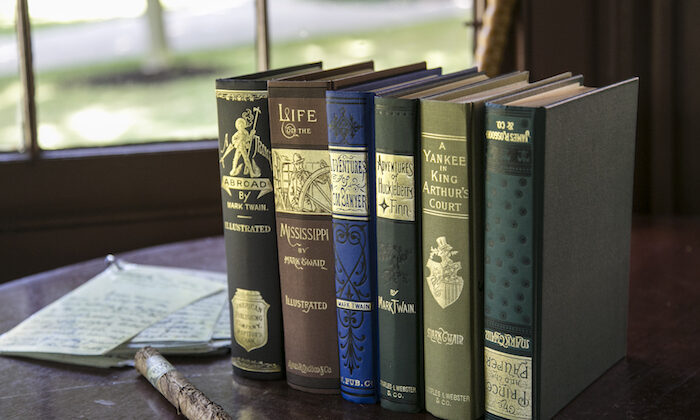 Some of Mark Twain's classics in his study in Elmira, N.Y. (Samira Bouaou/The Epoch Times)
Viewpoints

How to Keep Your Kids From Woke

For the young people of the United States, the first advantage of “wokeness” is that it provides purpose and meaning in their otherwise meandering lives. It gives our caring 18-year-old a place in a mighty arc of history that runs from injustice to justice, from bad people to good people.

The vision of progress has an immediate appeal if a young person has been disappointed in his other ambitions (not getting into the right school, losing a girlfriend, not making the varsity, and so forth). Criticisms don’t break through it. If a few historians discover some factual errors in the 1619 Project, if Antifa smashes a few windows, if women now outnumber men in college and graduate programs, and Jussie Smollett staged the whole thing, well, that doesn’t change the fundamental emotional satisfaction that the movement supplies.

It’s a false god, a wolf in righteous clothing, which means that parents and mentors who are dismayed by woke converts must seek another kind of resistance. You don’t fight a seductive religion with facts and logic, not when the hearts and souls of the young are at stake. The empirical and logical features of woke thinking aren’t what draw young votaries. The attraction is effective. They like the way it makes them feel.

They’re thirsty for big pictures and grand narratives, precisely what 21st-century secular liberalism eschews. When they go to college, general education highlights critical thinking, problem-solving, and diversity, which strike the rising adult eager to believe and to commit as tepid, neutral, and flaccid ambitions. They want deeper ends and vaster goals, and woke answers this want with fervor.

In that hothouse outlook, we have heroes and villains, guilt and innocence, accusation and penitence, and racism and anti-racism. The ground is firm, the choices stark, and ethical poles distinct. A young person newly on his own striving to improve, competing for limited spots and often failing, is insecure and lonely. With woke, he has automatic friends and allies. He belongs to something great and noble and true. No wonder the converts come off as excitable. The stronger the commitment, the better the blandishments of participation.

The problem, then, is how to kill the allure. If your 18-year-old catches the bug, your counter-arguments and hard evidence won’t go very far. She’s a fan, a disciple. You won’t change her ideas, and you won’t persuade her of the downsides of something that makes her feel special and worthy. You need a different plan.

It is this: You must change her sensibility—not her opinions, politics, ideas, or knowledge, but her taste and imagination. The sensibility doesn’t reason—it responds, passively not actively. It leads our youth to like some movies and not others, this person and not that one, and not so much for rational, logical, or political attributes. Opinions and beliefs belong elsewhere. The sensibility is made up of preferences, dispositions, styles, manners, and penchants.

The importance of sensibility to a person’s belief system is obvious. Sensibility is what makes an opinion heartfelt. If a youth knows someone who voices his own beliefs to a T, but that person’s personality rubs the youth the wrong way, the ensuing agreement isn’t nearly as strong as when a congenial character voices them. We must cultivate a sensibility among the young that will make them recoil in the face of woke proselytizing. As soon as they hear a speaker going on about white fragility, we want them to frown in distaste. As they see third graders divided up by skin color, they should utter an instinctive, “No!”

No refutations needed, no debate or reflection, just a quick revulsion.

They must be primed for it, however. That means exposure to better things. Sensibility improves by experience. A youth who eats at McDonald’s all the time won’t appreciate nouvelle cuisine. A 25-year-old with 10 years of Marvel Movies clogging his brain won’t “see” Hitchcock’s “Vertigo” in all of its cinematic brilliance. In fact, he won’t like it: “Too slow, man.” An all-classic-rock guy can’t “hear” Mahler’s 9th Symphony or a long Coltrane solo.

On the other hand, a person who has experienced those things over a sufficient period of time possesses a keener sensibility. He knows a cliché when he hears it. He has no patience for cheap tricks such as slow-motion in film and a blurted f-word in a comedy routine. He doesn’t like sentimentality, bogus drama, or cardboard characters. He’s listened to “Kind of Blue” and Chopin, witnessed Lady Macbeth break down, and watched “The 400 Blows.” Middling executions don’t impress him, nor do shallow conceptions of people, history, and the good.

The woke outlook has those latter vices in full. The script is predictable, the language stale, the dramatis personae flat and Manichean. Our well-trained youth has too sharp a sensibility to go for it. She sees it at once and shies away. She isn’t racist, transphobic, or whatever, merely discerning, with higher standards, an astute eye, and a refined ear. Woke isn’t clever, witty, brilliant, or beautiful. It promises the truth, but its understanding of human beings is too crimped and bilious to deliver. A youth who has read Mark Twain and Leo Tolstoy, seen “The Importance of Being Earnest” and “Death of a Salesman,” and viewed the Trevi Fountain and Rembrandt’s self-portraits won’t be moved by woke appeals.

That’s the answer. Expose your kids to the better creations, show them complex characters, read Emily Dickinson’s poems out loud. They’ll shield the rising adult from the temptations of pure virtue. When an activist demands that she sign a petition of complaint against a teacher who showed insufficient sensitivity to the plight of minorities, the voice of Thoreau should pop up in her head and say, “If I want to make a statement, I’ll do it myself—I don’t need your counsel—I can make up my own mind.”

Great art, music, and literature will make it happen. Woke thrives on cultural illiteracy, on bad taste, on ignorance. It likes conformity; it targets impressionable minds. Our well-educated kid won’t be so ready to bow.