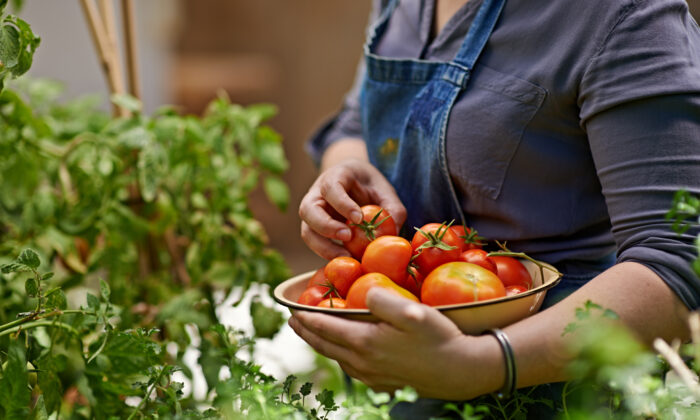 A woman harvests home-grown tomatoes from her garden. (Getty Images)
US Features

How to Grow 4,400 Pounds of Food a Year in the Backyard

A vegan family of four, without any gardening experience, can grow all of their own food for a year using 1/20th of an acre.

“I’ve taught 40 different methods at the community college level and this is the only system that I could say, ‘If I do a half hour of this kind of labor, I put in this many dollars, I will get 70 pounds at the end of the season,'” she told The Epoch Times.

“In a down economy, we’ve got to produce the calories for our family. It’s a change in lifestyle—it really is—to get people to be able to grow all their groceries in their backyard, but it’s entirely possible.”

Bailey said an 8-year-old girl recently produced 4,325 pounds of food in her first year of trying the Mittleider system, which is known for high yields and the ability to thrive in any soil condition and wide climate variations.

“It’s not a difficult system. She followed the checklist,” Bailey said.

In the past, Bailey would tell gardening novices to grab some seedlings from Home Depot or Lowes and “just keep them alive for 90 days” in the first year. In the second year, start growing from seed, and in year three, learn how to save your own seeds, she said.

Now, due to socio-political stressors, she’s encouraging people to get started right away and learn it all at once.

“I just think people ought to begin growing their own food because I don’t think there are any good answers on the market,” she said.

“It takes about three months to even get something that you’re really going to be able to chow down on. You don’t throw the seeds in and tomorrow, you have salad—that isn’t how it works. It could take 60, 90 days before you’re really having that hearty soup.”

In 2020, government-imposed lockdowns kept people at home and many turned to growing their own food—either as a hobby or as a way to combat concerns about the food supply chain.

“We’ve really seen—as far as it relates to the food supply chain, and particularly more recently, the cost of food within the supermarket—people wanting to take more control over that,” said Bill Hageman, owner of Peaceful Valley, the largest independent U.S. retailer of organic food production and gardening supplies.

“To be able to grow food within your own home and not have to go through retail chains and other distributors, that’s going to have a more pronounced impact going forward.”

The demographic of who is growing food at home has also shifted dramatically in recent years, Hageman said.

“For our segment within organic gardening, if you look back three or four years, the top demographic would more likely be someone who’s either retired or semi-retired,” he said, citing trends from the company’s online nursery GrowOrganic.com.

“The No. 1 demographic within our website right now is the 22-to-35 [age group]. And it’s split half between male and female. It’s individuals that are craving knowledge that probably didn’t grow up in an environment where they were exposed to their own food production.”

Community gardens are springing up in more places, and gardeners are documenting their successes and failures on social media, as well as sharing information on how to solve common issues.

“Where it would have been something that was individualized before, I think people are very proud of their accomplishments and it helps keep them motivated through the hard times when you lose some crop, or you’ve got a pest that you were able to control,” Hageman said.

He has seen a migration in shipping patterns over the past three years from traditional city centers and suburban areas on the West Coast near Los Angeles or San Francisco to areas such as Sacramento, Spokane, and outside of Boise, Idaho.

“It’s not just a West Coast phenomenon. We’ve seen a lot of people leaving Miami and New York City and moving to suburbs in Atlanta or Nashville,” he said.

Growing enough food to cut out reliance on the supermarket can seem daunting, but experts encourage people to just get started.

Hageman encourages people to “just get their hands dirty.”

“Spend a little bit of time online educating yourself on what resources you would need to be successful,” he said. “It’s really easy to get discouraged. Growing from seed is not always the easiest thing, [and] there are certain varieties that will grow easier than others.”

He suggests for first-time and casual gardeners to try starting seeds in a tray and then gardening in a raised bed or containers.

“There’s a pretty low barrier to entry around that,” he said. If you’re growing into the ground, “you really need to understand what’s in your soil.”

Additionally, more and more solutions are hitting the market for people living in urban areas and small spaces.

“Because of the growth of gardening overall, there’s been a lot of new products that have come out over the last two years or so that’ll help homeowners in cities,” Hageman said. People can now “easily” grow tomatoes in containers on a patio or fire escape, he said.

“Within the home, too, I’d say growing herbs, growing spices, growing things on your windowsill. That’s also an attractive way to start.”

Matthew Elsey, merchant of fertilizers and seeds for The Home Depot, said the mega-chain has seen an increase in people growing food over the past few years.

“One of the best ways to grow vegetable plants and herb plants in your own yard is in a raised garden bed. Elevated garden beds make it easier to control the soil and protect against pests,” he told The Epoch Times via email.

Seeds can be categorized into two general formats—hybrid and open pollinated.

Open-pollinated seeds are the most stable, and those that have been around for at least 25 generations can be labeled as “heirloom,” Bailey said.

“The heirloom then is going to be the most stable of the stable. And that’s what you want in a down economy, where you have to make sure that you’re feeding your family. There’s no room for messing up,” she said.

To explain a hybrid seed, Bailey likened it to the designer dog Labradoodle in the animal world—an intentional breed between a labrador and a poodle.

“But let’s say next year, the dogs get out” and mate, she said.

Bailey said hybrids generally produce great food the first year, but beyond that, one of several poor outcomes are likely, including sterile seeds or “you plant a cucumber, but you get a gourd,” or “you plant a tomato, and it reverts up the genetic chain.”

“Just because it’s organic, it just means it was grown in pretty dirt. It doesn’t mean that the genetics are what we want them to be,” she said.

Texas Ready sells seed banks for different-sized families, from the 10,000-seed “Piggy Bank” for two adults to the 200,000-seed “The Treasury” for 30-plus adults. The kits include at least 70 different varieties of produce that, used together with the Mittleider system, are geared to provide the annual caloric and nutritional requirement for the group. All of her seeds will grow in the continental United States, she said.

“Our seed banks are based on nutrition,” Bailey said. “So we have two or three things of every vitamin or supplement that is needed.”

Hageman sells organic seeds—sourced locally where possible—as well as plants such as fruit and nut trees. “It’s a higher quality product. We focus on health benefit overall, we focus on nutrition,” he said. The website is packed with gardening products and tips, including how to deal with pests organically.

Seed sales are a litmus test of wider economic and political changes.

Kurt Nauck, co-founder of Texas Ready, said when Barack Obama was president, sales continued to climb. He called Obama “salesman of the year” for several years. The company was selling three or four seed banks a day. However, when President Donald Trump took office, seed sales dropped so low (to two banks per month) that Nauck and Bailey decided in February 2020 to put the company on ice.

Then, the pandemic hit, and government lockdowns followed. The governor of Michigan banned sales of seeds and gardening supplies from the big box stores that she had allowed to remain open in the state.

“Since that time, we have remained extremely busy,” Nauck said.

“Our customer, I would say, is 95 percent-plus individuals who are pretty new to gardening. That’s always been the case, [and] that really hasn’t changed.”

However, Nauck said, the customer base is much broader than before, and even farmers are calling to find seeds to plant acres of food.

“We didn’t used to have farmers calling us,” he said.

Bailey said she has recently had difficulty sourcing some seeds due to more crop failures and other factors.

“I had never seen that quantity of crop failure. One or two a year, breeds that don’t produce, that makes some sense to me. But 10 or 15 varieties, that makes no sense to me,” she said.

Hageman said he doesn’t foresee a seed shortage to have a “massive impact” on the home gardener.

“I’d say that as it relates to specialty or unique seeds, what we’ve observed is that the price is going up more than the availability is going down,” he said.

Fertilizers are growing in price and potentially getting more scarce. Bailey suggests stocking up now on what’s needed to guarantee success with the Mittleider system—nitrogen, phosphorus, and potassium, as well as Epsom salts and trace elements.

“I could store five years’ worth for a family of four under a single card table,” she said.

USDA-certified seeds that are stored at around 40 degrees F will last about five years, with a germination rate of about 85 percent, Bailey said.

“Seeds are living organisms, so you certainly don’t want to vacuum pack or suck all the oxygen out—there has to be a slight amount of oxygen transfer,” she said.

Beyond the first year’s crop, gardeners should start learning how to save their best seeds for next season—a whole science in itself.

“We believe the old ways were best. Everybody in America at one point knew how to save seeds because that was how they were going to feed their families,” Bailey said.

“There are 17 major seed-saving families. By that I mean, watermelon, cucumbers, squash—those are all done exactly the same way. These aren’t difficult things, but they’re things that you would never guess to do.”

Bailey recommends the book “Seed to Seed” by Suzanne Ashworth as a how-to guide.

“If just a few of us could get good at saving seeds, and we have in our hearts to benefit our neighbors and train them to do it, this thing can go exponential, and there is food for everybody. There is no need for food shortages, hunger—nothing like that.”