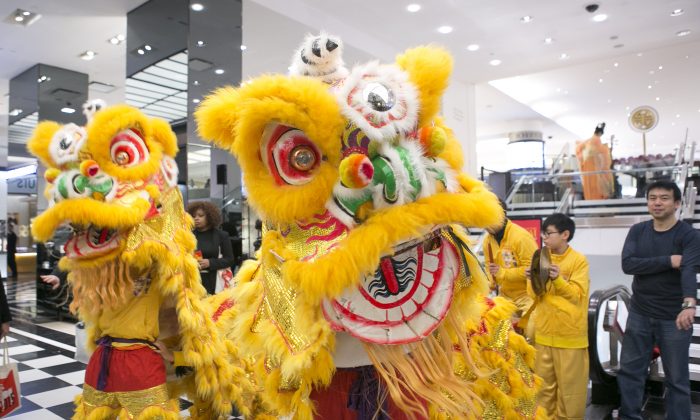 They are rolling out limited-edition items, hiring Mandarin-speaking staff, offering international shipping to Mainland China, giving away gift cards, providing personal stylists, and sending out invitations to their valued customers to special VIP events in the evenings after store hours.

In 2012 Chinese shoppers took first place in terms of spending on luxury goods, representing about 27 percent of purchases worldwide. That percentage is estimated to go up to 35 percent this year, according to data from the McKinsey Global Institute. Last year, Chinese shoppers spent about $61 billion (380 billion yuan) on luxury products, the Bain & Company consultancy group reported on Tuesday.

Luxury brands may be facing some stealthy challenges or may have to perform some balancing acts to maintain their traditional exclusivity, authenticity, and cachet.

It’s not surprising then that images of Chinese New Year goats, sheep, and rams are showing up liberally at New York’s most prestigious retail stores on 5th Avenue and in similar locations worldwide.

Yet catering to the Chinese market can be a balancing act if retailers wish to preserve their traditional exclusivity, authenticity, and cachet, says Pamela Tsai, marketing director for Epoch Media Group, which includes Epoch Times.

And so far, retailers are not getting it quite right, says Tsai.

China is “a culture of luxury with 5,000 years of ancient dynasties—rich, regal, and elegant,” Tsai says, but the traditional culture has been suppressed for over 65 years under communist rule, replaced with an crass culture controlled by the party, which adopted red as its color.

The use of red as the dominant color was introduced by the Chinese Communist Party (CCP) when it took power in 1949, seen for example in the red guard, the communist flag, the red scarfs worn by school children, and so on.

Only if China’s traditional culture is understood and marketed well, can the Chinese New Year holiday promotion add to the prestige of Western luxury brands.

High-end stores’ promotion displays for the 2015 Chinese New Year mostly portray golden-colored rams (goats or sheep), decorated and placed on a red background. It’s a color most people associate with China, but that red actually represents the “Red China of communist rule, not the authentic China,” Tsai said.

Yellow and purple are also the most highly regarded colors traditionally worn by emperors, scholars, royalty, and the upper class, Tsai said.

Dr. Tian Lang Zhang, a Chinese history professor at Fei Tian College in upstate New York, said that in contrast to the color red flooding so many advertisements associated with China today, throughout all the dynasties, “red was used, but never abused.” It was used sparingly to accentuate details.

That CCP takeover not only influenced what color would be most associated with the country, but it also destroyed the refined etiquette and behavior of people living in China today. The Cultural Revolution of the 1960s specifically sought to destroy anything that was old and traditional in order to replace it with communist atheism.

Due to their government’s overwhelming influence over their lives, including its control of the media that shuts out or criticizes Western cultural values, while Mainland Chinese have more buying power, many lack class. In other words, they don’t necessarily understand the tradition of the brands or know how to really appreciate the luxury items.

There is a story about a Chinese shopper who went into a Louis Vuitton store and wanted to buy a whole shelf of items on display, acting as if he was at a wholesale warehouse. Due to behaviors like this, some high-end brand retailers find they have a love-hate attitude towards Chinese shoppers: they welcome the buying power, but are weary of the behavioral consequences.

Also, some former valued customers of the top French Fashion house Louis Vuitton are preferring to shop at the American lifestyle brand Tory Burch instead because they don’t want to be associated with the numerous nouveau riche Chinese, some with poor manners, who are buying up Louis Vuitton handbags in droves.

The onslaught of counterfeits from China adds yet another layer of complexity to the marketing strategies of high-end retailers. Nieman Marcus, Macy’s, Bloomingdale’s, and Saks Fifth Avenue, among others, are selling their goods on Taobao, which is owned by the giant internet conglomerate Alibaba, and known for selling all kinds of counterfeit goods.

“That is damaging to their brand, because it’s the same as if Saks sold their products at a flea market or directly on eBay,” Tsai said.

These companies might have to do more research, get the right kind of consulting, and hold events to reach the sweet spot of acquiring more Chinese customers who can add to the prestige of their brands, said Tsai.

Bloomingdales and Max Mara are trying out that strategy, and see the Chinese New Year not only as a way to attract Chinese customers both here in the United States and from abroad, but to celebrate the Chinese culture with all of their customers.

Global brand ambassador and director of USA retail of Max Mara Maria Giulia Maramotti said via email that the kind of Chinese customer they are catering to is “one with a global mindset and an appreciation for craftsmanship and luxury goods.”

The wealthy-globetrotting Chinese who’ve been shopping abroad for over a decade easily blend in any cosmopolitan crowd and are not the sore spot. As the rising middle class travel more and buy more items of a popular brand however, it might dissuade the more sophisticated shoppers.

The desirable shoppers are young, upwardly mobile professionals working in multi-national firms with annual disposable incomes above $160K (RMB 1 million). While trendsetters and globetrotters—comparable to an affluent New Yorker, Londoner, or Parisian—are looking for more exclusive brands to differentiate themselves, those who follow them like to shop for visible logo luxury brands to show off their wealth.

A number of factors are currently affecting the buying decisions of Chinese shoppers, and they all point to more prestigious shopping destinations abroad.

Currently about half of luxury spending by Chinese shoppers is happening outside of China. The incentive to shop abroad is high because taxes on luxury goods in China can go up to 70 percent, making it much less costly for Chinese to travel and buy as many luxury items as they can. They load up the truck, so to speak.

In addition, after Chinese regime leader Xi Jinping started his political anti-corruption campaign, sales of luxury products in the Mainland have plummeted.

That’s because many of the Chinese officials and their numerous cronies and associates who are notorious for using luxury items for bribes—euphemistically called “gifting”—stopped shopping for those items.

Also, when President Barack Obama extended business and tourist visas from one to ten years, and student visas to five years, the number of Chinese visiting the United States increased dramatically. The U.S. Department of Commerce predicts that the number of Chinese visitors will reach 3.1 million in 2019, a 172 percent increase from 2013. They will bring an estimated $80 billion in spending power.

As high-end retailers refine their Chinese New Year marketing campaigns and hold culturally enriching events, such as Bloomingdale’s, which is showcasing a Lion dance, traditional Chinese tea ceremony, music, and calligraphy and paper cutting portrait demonstrations, ironically Chinese travelers may be exposed to more accurate depictions of their culture in the United States than at home.

On Tuesday, mostly red fireworks, some blood-red, shot up over the Hudson River by 44th Street in New York City, not far from the Chinese regime’s consulate.

In a more authentic world, green fireworks symbolizing the peaceful nature of this wood year of the goat, or perhaps purple or golden yellow symbolizing China’s rich dynastic history, would glisten the New York City skyline instead.

The Chinese New Year is the longest and most important holiday for Chinese. It starts February 18 and lasts 15 days up until the Lantern Festival on March 5th.