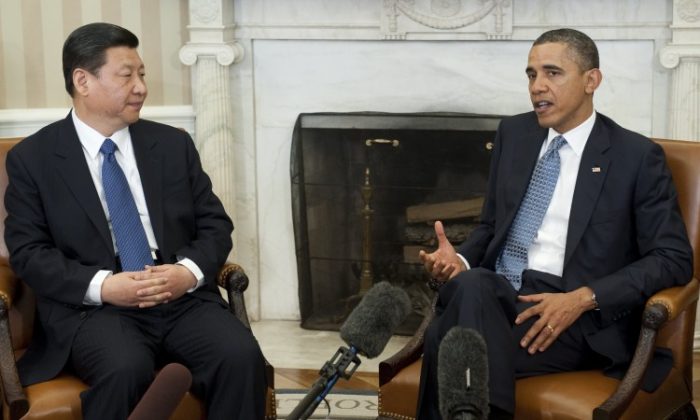 How to Evaluate US Visit by Next Leader of Chinese Regime

During his entire visit to the United States, Xi Jinping had to be extremely cautious. He had to face all kinds of protests and condemnation, while being careful not to steal Hu Jintao’s show.

He had to make the Americans attach importance to him, while paying attention to being monitored, or even plotted against, by the Chinese Communist Party (CCP) leadership in China. It was really difficult for him.

Thus, if someone in China said that Xi achieved such and such on this trip, that story must have been fabricated by the CCP’s media.

We can basically divide Xi’s U.S. visit into two parts. First, he was being assessed by the White House, State Department, the Defense Department, both houses of Congress, and other departments in Washington DC. Second, he revisited Iowa, watched a basketball game in Los Angeles, and played at wooing the United States.

As for how visiting CCP leaders often suffer embarrassment, Xi must have prepared himself well psychologically before his U.S. visit.

After dinner with the State Department, cocktails in Iowa, the NBA game in Los Angeles, and saying what should be said on behalf of the CCP, the only thing Xi could show off about was that the level of reception given him at the Pentagon was higher than what was given to Hu on his first visit to the United States. However, Xi dared not show his delight, but was rather uneasy about it for fear of offending Hu.

Overall, Xi had bad luck on this visit to the United States. He encountered difficult treatment from all fields. Of course, it was not necessarily specifically aimed at Xi personally. Since he was representing the CCP regime, he was rightfully bombarded.

Throughout his trip Xi was trailed by protesters. He encountered challenging treatment from the White House and both houses of Congress, from both parties. The majority of American sentiment, expressed in opinion polls, was: “I don’t like China.”

At a press conference prior to the closed meeting at the White House, Obama put away his featured smile commonly seen at diplomatic occasions and opened his speech with, “The United States is a Pacific nation!” lambasting Xi for remarks he made prior to his U.S. visit about the U.S. shifting its strategic center to the Asia-Pacific region.

Obama bombarded Xi even more fiercely during the closed meeting, and even Joe Biden, who always displayed a polite and friendly demeanor as he accompanied Xi, mentioned several times that the human rights situation in China was worsening.

Members of Congress of the two houses were even more direct.

Republican presidential candidate Mitt Romney said if China continued to repress its own citizens, this nation couldn’t be seen as a reliable partner. Romney vowed that unless China changed its current policy, he would designate it as a currency manipulator on the first day he became president, and he would take appropriate measures to resist China’s exchange stance.

According to an opinion poll run jointly by the Washington Post and the American Broadcasting Company, released on Feb. 14, 52 percent of Americans responding said they don’t like China and only 37 percent like China.

Xi’s visit of the small Iowa town of Muscatine for a reunion with people he met there 27 years ago when he was a county party secretary, and to arrange a US$4.3 billion soybean purchase, is a common practice CCP officials use to shift the focus away from their unpopularity and to create a cordial image.

If Xi were indeed cordial towards the common people, and really wanted to be the leader of the Chinese people, he would be spending the money to benefit the farmers in China, who still don’t have enough food and clothing.

Xi’s U.S. visit was not meant to be significant. However, it happened during the infighting between Wang Lijun and Bo Xilai in China’s central-western megalopolis of Chongqing, spreading to Zhou Yongkang and other high-ranking figures in Beijing. It gave a new meaning to Xi’s visit.

For the United States, the original plan was just to take a closer look at Xi and to learn more and understand the new leader expected to take over after the CCP’s 18th National Congress.

The United States never expected that Wang Lijun—Chongqing’s chief of police, who sought refuge in the U.S. Consulate in Chengdu—would reveal to the United States confidential information about the infighting in the CCP’s highest leadership circle.

The Wang affair contradicted the belief the United States has held over the decades that the CCP’s rule was “very stable” and would “not collapse soon.”

The U.S. government suddenly became aware that the CCP’s infighting could cause the communist regime’s collapse at any time, and the United States could even use the infighting to push and speed up the CCP’s disintegration.

To test the waters, U.S. officials released the news during Xi’s visit that Bo Xilai and Zhou Yongkang had conspired to topple Xi, according to information supplied by Wang Lijun to the U.S. Consulate.

Originally, the United States had been carefully studying who Xi is. They tried to understand Xi’s character and conduct, as well as the impact of the CCP’s adjustment to changes in the economy, issues with the RMB exchange rate, and other economic and trade friction concerns, all still within the previous policy framework toward China for the next five to ten years.

However, as Wang Lijun exposed the serious infighting at the core of the CCP, the United States suddenly became aware that cohesion in the CCP had disappeared, and the days of the CCP rule might be numbered.

The United States realized that the CCP could be going through a disintegration process similar to that of the former Soviet Union 20 years ago. So they began a comprehensive reassessment of their policy toward China.

Xi’s visit to the U.S. is considered by most to have accomplished no practical achievements, but the trip was not worthless for Xi.

At the very least, Xi should have learned of the demands from overseas Chinese, especially from the Falun Gong community, who asked Xi to stop the persecution of them in China, to help disintegrate the CCP, and to bring Jiang Zemin and other top officials responsible for persecuting Falun Gong practitioners to justice, so that Xi can avoid becoming an accomplice to their crimes and a scapegoat for Jiang and the CCP.

Perhaps Xi himself wasn’t aware that learning these realities could have been the best thing to come out of his difficult trip to the United States.