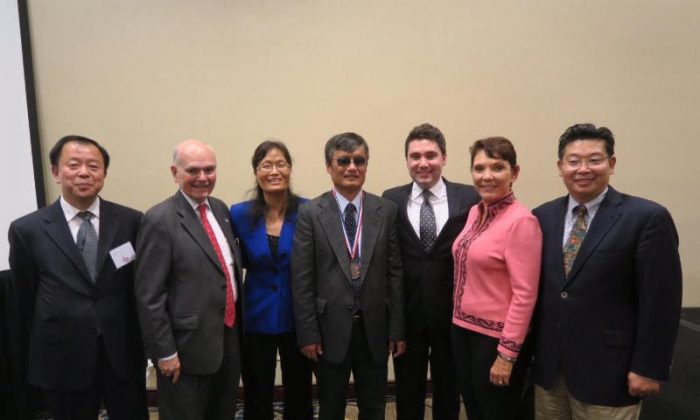 For decades now the United States has faced a thorny problem: its bilateral relationship with China is built on a fiction.

The fiction is that China actually wants to be “friends” with the U.S., that it can be trusted, or, even, that it wants to be like the United States.

Under the Communist Party, of course, none of those things is true. Indeed, the CCP pretends that it wishes to be friends with the United States. But the United States, for its part, seems to covet a genuine friendship. This is what the talk of win-win, mutual trust, etc., are built upon—for China, cynical promises to ward off U.S. toughening; for the U.S., hope.

But in the last couple of years it has become increasingly clear to even the most ardent cooperationists that the talk of win-win is merely a pretext under which the CCP can win—pursuing its own interests even if those interests are inimicable to those of the United States.

This is a Cold War-style relationship, but with an important twist: the level of interconnection between the two countries means a truly out-and-out hostile relationship would be extraordinarily disruptive. America, like China, needs to walk a balance between engaging with China and more effectively defending its own principles and interests, both of which have taken a back seat as the Party continues to push.

A recent conference in Washington, D.C., suggested some answers.

Hosted by the Victims of Communism Memorial Foundation, the inaugural China Forum, which included two days of fora and discussion, was dedicated to a careful and meticulous engagement with the actor that is at the heart of America’s China problem: the Chinese Communist Party.

As a preliminary step in crafting a realistic China policy, an effort to understand the Party in terms that Party apparatchiks themselves understand it, even if they’d never admit as much to foreigners, is vital.

This is clear in the military, cyber, and propaganda realms. Simple examples include China’s island building in the South China Sea; its mass hacking of American companies; and the denial of visas of American journalists from China even as Chinese state-run media operates unfettered in the United States. In each of those areas, the PRC’s offensive is deep and broad, and U.S. responses have been uncoordinated and ineffective.

“What we’re trying to do is bring the truth about where China is today and where the Party is, and let American people know that this is how they should judge U.S.-China relations,” said Lee Edwards, the Chairman of VOC, in an interview on Nov. 5.

“This is the perfect time to do this kind of forum,” he added. Edwards says he is recruiting allies in Congress to form a caucus dedicated to further exploration of CCP behavior and how it may best be countered.

“We’re encountering more interest and more support for our foundation than we’ve had in the last five or ten years,” Edwards said. “We think this could be the opening battle, if you will, in a war to bring about a freedom and liberty in China.”

The discussions were impassioned and educational—historian Frank Dikotter’s account of the brutal rise of the Party; Rep. Chris Smith’s forceful condemnation of the one-child policy, among many other abuses; Prof. Yu Maochun’s explanation for why the United States could never really cede the oceans to China; Michael Auslin’s reworking of Richard Pipe’s idea of the perils of “mirror-imaging“—and by their corollary went some way to addressing what the United States ought to actually do in response to the challenge posed by China.

As distilled from private discussions with participants, and in particular the panel featuring Prof. Yu, the scholar Christopher Ford, and AEI’s Michael Auslin, a shortlist of useful concepts includes:

Getting a grip on what the Chinese Communist Party is all about—not falling into meaningless “pro-China” and “anti-China” categories, but simply looking at the Party for what it is, and how it operates.

Reacting quickly to Chinese provocations, and openly and proactively defending U.S. interests and principles across all fields: freedom of navigation, cyberspace, media. This is easier to say than craft specific policies for, and includes a range of actions, but as a guiding principle it also frees and enables creative approaches.

Building alliances with other democracies to make clear that the Communist Party is contending with a “united front” (to use a favored Party term) that opposes, say, its attempts at bullying in international waters.

Using the CCP’s own asymmetric warfare against it—in other words, imposing costs for behavior that is adverse to U.S. interests. Denial of an American journalist visa (where’s ours, for that matter??) could be met with the lengthy delay of the next Chinese ambassador’s. No words need be said. When dealing with a mob boss, play it like a mob boss: “Ah yes, now about that visa for Ambassador Wang. There have been a few delays. But we could probably clear those up if everything went smoothly in our press corps.”

Leaping to the bully pulpit. This is perhaps the most asymmetric attack of them all. The United States intelligence agencies do not steal intellectual property and give it to top American firms—and China has little worth stealing in that regard—but perhaps the NSA could instead purloin video evidence of, say, the systematic torture that the Public Security Bureau inflicts upon political prisoners, and threaten to expose it? The American president could actually meet with the family members of political prisoners in detention. There is nothing the Communist Party guards more ferociously than its ersatz legitimacy, so why not extract that as a price for the regime’s other misadventures?

This was not an idea brought up at the conference, but I’ve always thought that the ultimate U.S. trump card in the bully pulpit stakes would be a speech by President Obama listing the pile of evidence for credible accusations of mass murder, for profit, conducted by Chinese security forces, so that prisoners of conscience could be harvested for their organs. America’s foreign policy should be in the service of the ideals the country was founded on. By bringing up organ harvesting, Obama would be acting in the long-term best interests of the United States and China.

If we’re concerned with the Communist Party actually collapsing because of its utter moral bankruptcy, and the exposure of its organized, sinister conduct—we needn’t fear. After two days of exploring Communist Party rule at Victims of Communism events, it’s clear that from the perspective of the Chinese people, the people of Asia, the United States, and the world, there could be no more ideal outcome. And the sooner the better.