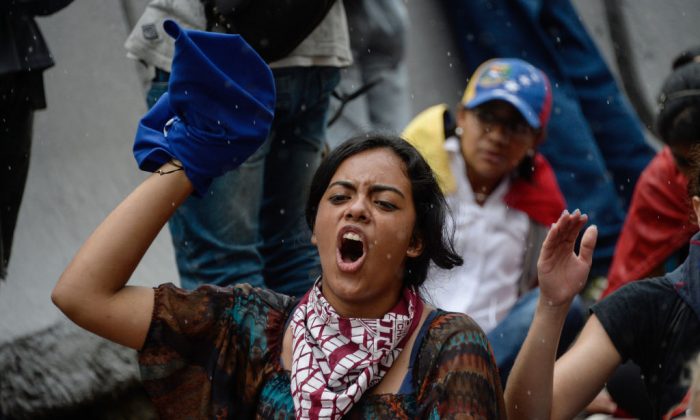 Opposition activists protest against the government in Caracas on May 12, 2017.(FEDERICO PARRA/AFP/Getty Images)
Business

How to Crash an Economy

The United States froze the personal assets of Venezuelan President Nicolás Maduro on July 31 in response to what the international community considered rigged elections in the troubled South American nation. For the people of Venezuela, however, the sanction is of little consequence as their economy spirals toward hyperinflation.

“Inflation has been practically institutionalized in Venezuela, eroding the income and savings of the citizens,” wrote Willians Ruiz, director of the Venezuelan libertarian think tank Instituto Mises, in an article on the organization’s website.

He says that after taxation and oil revenue could no longer fund populist state programs, the government had to resort to increased money printing to keep financing its expenditures. Now, with inflation at more than 950 percent according to calculations by Johns Hopkins University professor Steve Hanke, and with shortages of even the most basic goods, it seems there is nothing left to take.

But how does a country relatively rich in oil descend into economic oblivion? Fergus Hodgson, editor of the intelligence publication Antigua Report, says it is because of the systematic dismantling of the market economy and government corruption, mostly during the Chávez regime.

At some point, Maduro has to resign. If they don’t want the worst-case scenario, they have to end this government.
— Fausto Spotorno, economist, Orlando J. Ferreres & Asociados

“In the 1990s, [Hugo] Chávez led two coups against the government. Hundreds died, but he got pardoned,” said Hodgson. “Because of an enormous dissatisfaction with the government then, he looked like the good guy and came to power in 1999. “He set up his 21st-century socialism, a more sophisticated Cuba. It exploits the institutions of democracy. You control the voting system, you can rig it in your favor. If you have the power to change the constitution, you will do it.”

Case in point: Maduro’s socialist party won all 545 seats in an election for the Constituent Assembly, which will replace the opposition-controlled Congress and allow his party to rewrite the country’s constitution, cementing his grip on power.

However, it is the war against the private sector, rampant since the Chávez regime, that has reduced the number of goods available for the people to consume and for the government to redistribute for its populist programs. Fewer goods and more government-issued money mean higher inflation.

“Chávez had this incredible disrespect for the rule of law and private property. He would go out and say, ‘Expropriate that building,'” said Hodgson. “He nationalized industries and farming areas. He started his pet projects, like the Chavista communes.”

When the two basic tenets of a market economy—the rule of law and property rights—are abolished, the private sector doesn’t have the incentives to invest time and resources in productive enterprises. Scarcity then drives citizens to take desperate measures to procure food and basic necessities, making the problems worse.

“The farmer needs security teams to protect his animals. So the cost of doing anything productive is too high,” said Hodgson. “There is little local industry left. The security is so bad, you can’t have any industry.”

Until the middle of 2014, the socialist regime could use revenue from the nationalized oil industry to buy off the support of the people. But then prices dropped from $100 per barrel to less than $40 in 2016 and have been hovering around $50 since, depriving the government of vital foreign currency income.

And even though the state oil company Petróleos de Venezuela, S.A. (PDVSA) is state-run and therefore has better security, the Chávez regime made it hopelessly inefficient, such that it isn’t profitable when oil falls below $50 per barrel.

“The Chavistas kicked out everybody who wasn’t one of them—19,000 people. So they only had political appointees and the real experts left the country. It became mismanaged, and they could not maintain the infrastructure,” Hodgson said.

Since the oil company was the only actually profitable business in Venezuela, political appointees at every level were in competition to siphon off resources, leaving a corpse behind. Right now, even some PDVSA ships cannot enter foreign ports because they don’t meet safety standards.

Since oil revenues started sagging in 2014 because of corruption and lower prices, the currency crashed, from 70 bolívars to the dollar to 12,191 bolívars to the dollar on Aug. 1, 2017, according to the black market rate published by DolarToday. Venezuela just doesn’t get enough dollars through oil anymore to pay for its imports, which are mostly used to placate the socialist voter base.

“You become a populist when the prices are high and when you could spend money,” said Fausto Spotorno, an economist at consultancy Orlando J. Ferreres & Asociados in Argentina. “You give money to people and they are happier, but then production starts stalling, and you have to give them money in other ways.

“When the price of oil starts to fall, that’s the end, because you don’t have any more resources. You can’t keep the populist system working. The only way is to limit the freedom of the people directly.”

As for the end game, Spotorno thinks it’s paramount to change the regime and implement reforms similar to those in Argentina after President Mauricio Macri came to power in 2015: Float the currency, restructure the debt, end the unaffordable vote-buying programs, restore the rule of law, and attract foreign investment to ramp up production.

“At some point, Maduro has to resign. If they don’t want the worst-case scenario, they have to end this government, or else you could have a coup d’état from the military,” said Spotorno.

If the current government stays in power, Venezuela could end up like Zimbabwe, where President Robert Mugabe is still dictator at age 93 and steers the country from one economic crisis to another.

However, there may be one silver lining for Venezuelan citizens who can’t even find food or toilet paper: the Caracas stock market. Despite inflation, widespread shortages, and the hits to production taken by private industry, the stock market has been on a tear, rising 340 percent this year and over 6,000 percent since 2014.

Or has it? With the currency dropping 99 percent over the same time period, those returns aren’t real. It turns out they’re just another mirage in the socialist utopia of Hugo Chávez that Venezuela can’t forget fast enough.