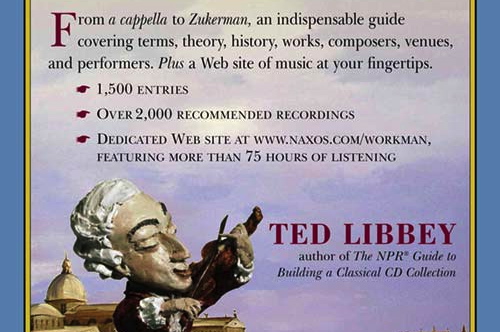 How to Build Your Own Classical Music Library

What kind of classical music do you like? Baroque, Romantic, or atonal? Do you prefer instrumental works or vocal?

There are subcategories within these categories. For example, vocal works include operas, cantatas, and art songs. Some people like German opera but not Italian. Or they may like Weber’s or Mozart’s operas but not Wagner’s or Strauss’s.

Are you a fan of original instruments versions or modern orchestral renditions? John Eliot Gardiner’s Bach or Leopold Stokowski’s? Or both? Symphonies, chamber music, or solo performances?

Fortunately, there are various books to point you in the right direction. Ted Libbey has two works: “The NPR Guide to Building a Classical CD Collection” and “The NPR Listener’s Encyclopedia of Classical Music” (which recommends over 2,000 recordings).

The first has been criticized for being rather skimpy on vocal works and the second has some eccentricities. For example, why include Richard Tucker but not Jan Peerce? Eileen Farrell sang with both tenors and considered Peerce the superior artist.

Any of these kinds of the books have an element of subjectivity and should not be regarded as gospel.

While reading about music is helpful, the only way to find out what you like is to listen.
“The NPR Listener’s Encyclopedia of Classical Music” has an accompanying website with access to 525 selections (more than 75 hours of listening).

There are also a number of services that provide an array of classical music. Naxos has a Music Library with 88,430 discs and 1,288,400 tracks. Live365 and Spotify are other alternatives. Or you can listen to a classical radio station like New York’s WQXR. Amazon often has audio clips of the albums on sale and YouTube has many classical pieces.

Another resource for New Yorkers is the public library, which has an extensive collection of CDs and DVDs, which can be reserved online and delivered to the branch nearest you.

If your funds are limited, you should consider reissues of classic recordings, which usually cost less. If they were made after 1960, the sound should be acceptable and will be in stereo. There may be some tape hiss if the recording was not digitally recorded.

Even before the late 1950s, mono recordings, if made in the studio, will often have excellent quality and may even have the best performers. Two that often top opera lists are the Callas–Di Stefano–Gobbi “Tosca” and the Björling–de los Angeles “La Boheme.” Later recordings may have superior sound but none have better singers.

Collections of various artists are another way to collect the work of classical music performers at a bargain price, such as Callas 100, a 6-CD collection that sells for about $20.

Barry has been a music, theater and travel writer for over a decade for various publications.