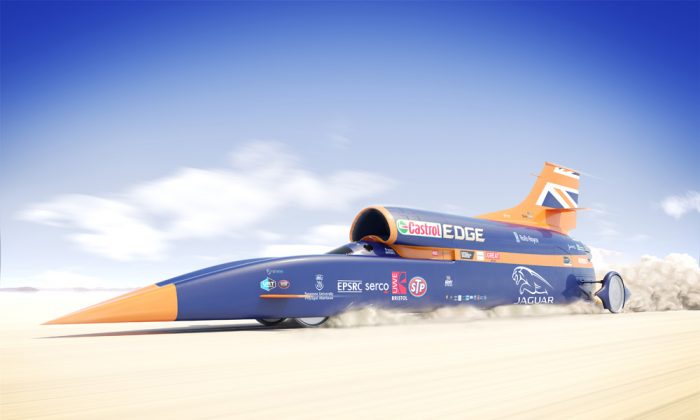 How to Build the World’s Fastest Car

In 2016, a team of engineers and adventurers will travel to the South African desert and attempt to become the first people to drive a car at 1,000mph. The British-made vehicle, Bloodhound SSC, is designed to smash the current world land-speed record of 763mph to become the fastest car ever built.

Amazingly, this incredible target isn’t even the project’s main goal. Breaking the land-speed record is nothing new for the United Kingdom, which has held the title for 79 of the past 100 years—and continuously for the last 32 years, most recently with Thrust SSC, driven by Andy Green. But when Green, along with previous record holder Richard Noble and the then science minister Lord Drayson, launched Bloodhound in 2008, their aim was to inspire the next generation of problem solvers to put their great talent into science, technology, engineering, and mathematics.

The other goal, of course, was to challenge the country’s engineers to complete a world-class research and development project. But how do you even start to design and build a car that is hundreds of miles an hour faster than any other the world has ever seen? There are three main things to consider. Is it slippery enough? Is it powerful enough? And is it strong enough?

The Slippery Subject of Aerodynamics

Anyone will know just from flying a kite that there is great power in the moving air. That’s fine if you are working with the airflow but with Bloodhound we will be trying to push against it faster than the speed of sound. Pushing an object through the air creates a tremendous amount of resistance force and the greater the frontal area of the object, the higher that resistance will be.

Thrust SSC used two jet engines to provide the power. These operate by sucking air in from the front, compressing it, burning fuel, and forcing it out the back to create thrust. This kind of design needs a large frontal area so the jet engines can scoop up enough air. But analysis showed a design like this would never be able to reach 1,000 mph. The frontal area would generate so much resistance that you would never be able to produce enough power with current technology to counter it. Instead we had to design a vehicle with a smaller frontal area and that required the use of a rocket engine (more of that later).

To check the aerodynamics, a computer model was run at the University of Swansea using a system known as computational fluid dynamics (CFD). This enabled the team to understand how the car shape would respond to airflow over the bodywork at low speeds (subsonic), as it approached the sound barrier (transonic), and high speeds (supersonic). As a result, we were able to simulate more than 150 designs to ensure that we had a stable vehicle at any speed.

Because of the need for a small frontal area, two jet engines would be impossible. The solution was to combine a single jet engine with rocket power. Rockets can produce incredible power either by burning a mix of liquid fuel and liquid oxygen or by lighting an explosive mixture of solid fuel and oxidizer. The problem with both these models is the chemicals. Liquid oxygen is very difficult to manage and must be kept at -182 degrees C (-295.6 degrees F). Rockets with solid fuel, once started, cannot be stopped until all the fuel is consumed. Once again a third way was needed.

Designing the Fastest Car on the Planet

We selected a hybrid rocket that uses very pure hydrogen peroxide (the stuff you may use to lighten your hair) as an oxidizer and a rubber grain as a fuel. This meant we could turn off the flow of oxidizer and stop the explosion, producing a controllable rocket.

But this created another problem: how to get the oxidizer into the rocket. With a solution suitable for a land-speed record, we used a high-powered Jaguar sports car engine to power a fuel pump that is able to deliver 1000 liters (264 gallons) of peroxide to the rocket in 20 seconds. These three engines together should be enough to get us to 1,000 mph.

Another concern is that all of the components of the car are subjected to huge pressures. For example, the outside of the wheels spin so fast that they generate a force 50,000 times greater than the Earth’s gravity. That means that each gram of material has an effective mass of 50 kg. Meanwhile, the shaft that drives the fuel pump must carry considerable torque while moving a liquid that would erode many materials.

To overcome these challenges, the wheels were forged from a single block of high-grade aluminium. This ensured the grains of metal that made up the block were all aligned, reducing the chances of a defect or a rupture. The body shell of the car has been manufactured from carbon fiber to ensure a light but incredibly strong structure. And the fuel pump drive shaft is manufactured from Custom 465, a material that is chemically unreactive but strong enough to turn the pump. We then thoroughly tested each component to replicate the forces it will experience during the record attempt.

All of these problems show how designing and building a car like Bloodhound requires a huge wealth of expertise. From the chemists who develop the materials to the engineers who work out how to manufacture the components and integrate them into a single working system, breaking the land-speed record is a cooperative project involving many more people than just the driver. When the car makes its nerve-biting record attempt in 2016, it’ll be as if they’re all in the cockpit with him.

Phil Spiers is the head of structural testing for the Advanced Manufacturing Research Center at the University of Sheffield in the U.K. This article was previously published on TheConversation.com