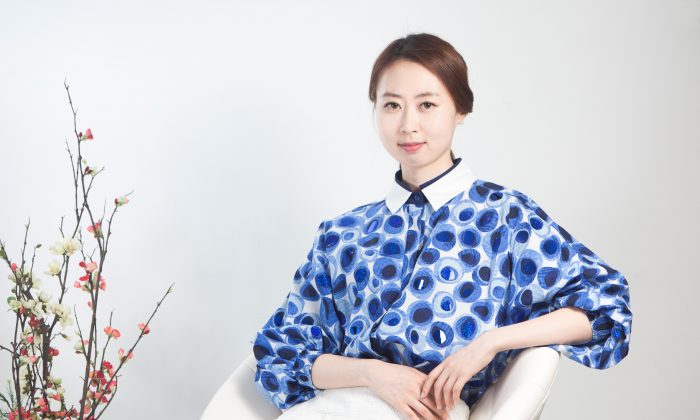 NEW YORK—Hyesoo Yoon is an entertainment television producer and host who refuses to cover gossip or scandals. No inside scoops on startling affairs; no big reveals of secret pasts. Yet somehow, her show is growing in popularity.

Yoon is the trilingual host of “Hallyu World,” a program that covers South Korean film and fashion. The show has caught on around the world since its creation a year ago.

Entertainment websites in Taiwan, Thailand, Vietnam, and even the Middle East, translate and repost Yoon’s content within a few hours of its airing.

In conversation, Yoon switches back and forth casually between Korean, English, and Chinese as she paces through the New Tang Dynasty (NTD) television station in Manhattan.

Yoon thinks fans should see celebrities as the humans that they are, beyond the mask created by an entertainment industry.

Her show airs on NTD, a sister media of Epoch Times, which is a New York-based station that broadcasts globally, including directly into parts of mainland China, via satellite to provide an uncensored Chinese-language alternative to China’s state-run media.

“I never get excited when I meet a celebrity,” said Yoon, a 28-year-old with soft and unworried eyes. She thinks fans should see celebrities as the humans that they are, beyond the mask created by an entertainment industry.

Although many Americans may not be keen followers of Korean pop culture (besides Gangnam Style), Yoon’s attitude toward celebrity reporting is worth noticing in the United States.

Yoon’s uncommon approach to celebrity reporting is intriguing considering that the media’s portrayal of celebrities is influential in the construct of a society’s identity and culture.

Girls and young women today continue to imitate Rihanna’s half-shaved head hairstyle from 2013, while Lady Gaga, Kate Moss, and Kim Kardashian’s “naked dresses” have inspired a trend of sheer clothing. People identify with this projected “freedom,” where one lives unrestrained by social norms.

“The power of the celebrity, then, is to represent the active construction of identity in the social world,” P. David Marshall, a prominent cultural critic, wrote in his book “Celebrity And Power: Fame and Contemporary Culture.”

Although celebrities hold the power to set trends and influence what millions of people like or don’t like, the focus of entertainment news in the United States and around the world remains superficial: Toned bodies. Adorably in love. Happy pregnancies. Secret pasts. Betrayals. Bacchanal social gatherings.

Why are people obsessed with these types of celebrity stories, and what does it mean?

To Know the Renown

The original celebrities were heroes. People wanted to know more about them so that they could learn to imitate their admirable qualities.

“[The hero] is a man or woman of great deeds. … The hero created himself; the celebrity is created by the media,” historian Daniel Boorstin wrote in his book “The Image: A Guide to Pseudo-Events in America.”

The change in how media covered celebrities came with Mary Pickford, the very first movie star. Pickford was a Canadian-American actress who rose to fame in the early 1900s.

Before Pickford, actors and actresses in the film industry were contract workers and they were seen as interchangeable, explained Kimberly Casteline, a media and culture academic at Fordham University.

“Mary Pickford was the first celebrity that Hollywood studio systems promoted as a personality in and of herself,” Casteline said in a telephone interview. “That was basically what promoted the idea that the actor themselves, the body of the actor, is a commodity rather than their labor.”

Since the late 1920s, the American press and its gossip columnists have been producing celebrity stories to fulfill our desire to know the renowned.

Since then, it’s been more or less a process of decline, as the industry focuses more and more on the artificial image.

During Yoon’s 14-hour flights every two months from her office in Manhattan to her interviews in Korea, she wonders what makes these celebrities tick.

There’s often a positive moral component in her interviews.

She pores over other media’s articles and tries to fill in what she thinks is missing. Who are they really beyond the carefully molded personas? More important, what can people take away from her interview?

“I’m looking to provide something more meaningful,” she said.

Yoon’s interviews almost remind one of a New Yorker magazine profile. A viewer walks away with a sense of who this celebrity is—what drives them, what their fears are. There’s often a positive moral component in her interviews.

When Yoon interviewed Lee Seung-gi, a popular Korean actor and singer, she asked him if there were any scenes from his movies that he could relate to in his life.

Lee said he could relate to the plot of “Love Forecast,” a romantic comedy where he plays a frustrated protagonist who is in love with his longtime friend, a weather broadcaster. The broadcaster has feelings for him too, but would rather fall in love with a different man one after another so she could enjoy being in a constant state of elation.

“Young energetic people always like a relationship full of excitement … if you get too attached to it you will end up solely chasing after something imaginary,” Lee told Yoon.

Yoon leaves it at that. She chooses not to ask about the rumors that surround his dating life.

Her show “Hallyu World” is based on the premise that the audience isn’t asking to hear about scandals and rumors about celebrities. So Yoon doesn’t report on them.

“The Korean host you mention strikes me as trying to work against the bias of the contemporary media environment, at least to some extent,” Lance Strate, a professor of communication and media studies at Fordham University said in an email. “That is highly commendable.”