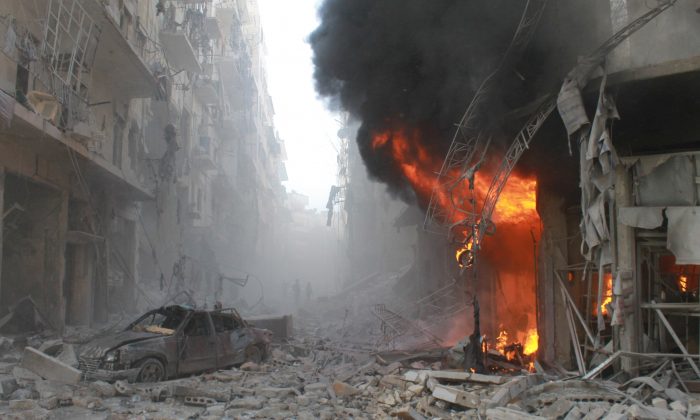 Debris cover a street and flames rise from a building following a reported airstrike by Syrian government forces on March 7, 2014, during the Friday prayer in the Sukkari neighborhood of the northern city of Aleppo. More than 250,000 people have been killed in Syria since the start of a March 2011 uprising against the Assad family's 40-year rule. (Baraa al-Halabi/AFP/Getty Images)
International

Since 2012, the war in Syria has lurched from one escalation to another. Syrians have been subjected to large-scale military force not only by their own government, but also by an array of rebel groups, Islamic State (ISIS), a U.S.-led coalition, and other states. The results have been devastating, as the recent bombing of hospitals illustrates in particular.

Most of the international interventions came in the form of airstrikes, though this may change if reports that Turkey and Saudi Arabia are contemplating a ground invasion are true. Although these actions have triggered debate in legal circles, their repercussions for the way force is used haven’t got much attention.

The interventions in Syria may have deeply affected the norms that define the architecture of global security.

The interventions in Syria may have deeply affected the norms that define the architecture of global security. Once military force becomes the rule rather than the exception, the general prohibition on the use of force is threatened. This changes established boundaries of what’s permissible, and therefore corrodes one of the core premises of global security in general.

The pursuit of state interests by military means is proscribed under the U.N. Charter, which contains an agreement on the general prohibition of using military force. That general prohibition and its two exceptions—self-defense and U.N. Security Council authorization under Chapter VII—have become key guarantors of global security. They provide common standards regulating the use of force, and above all emphasize that force should only ever be used as a last resort.

But over the last decade, we have seen shifts in how states use force, especially when it comes to countering terrorism. States have used military means, such as drone strikes, more frequently and readily in response to suspected terrorists and other non-state actors.

This is particularly evident in Syria, where members of the U.S.-led coalition against ISIS have flown 3,350 airstrikes since September 2014, while the number of strikes Russia has conducted against various groups since August 2015 is unknown. Acting in support of the Assad government, Russian strikes have primarily targeted territory held by the Syrian opposition rather than by ISIS.

There is a lot of controversy over whether airstrikes in Syria conform to the international norms that regulate the use of force. States in the U.S.-led coalition argue that they’re acting in individual and collective self-defense, citing an Iraqi request for assistance in combating ISIS attacks staged from Syrian soil.

The U.N. Charter includes the right to self-defense in response to armed attacks, but because the international legal system is structured around the boundaries of sovereign states, its application as self-defense against terrorists is not always so clear cut.

There are three sets of circumstances where it’s generally considered legal to use military force in self-defense against terrorists: when the terrorists’ “host” state sponsors or supports them (also called the attribution standard); when the host state consents to the use of force on its territory; or when the U.N. Security Council authorizes the use of force.

But various states (including the U.K. and the United States) have also introduced the “unwilling or unable test,” which is meant to justify using force against terrorists. This is the argument that a “victim” state may use force against terrorists in another state if the host state has proven unwilling or unable to counter the threat. There is controversy over whether this test is legally valid. In addition, the “test” comes with obvious practical impediments, chief among them that it’s not clear just who determines whether a state is “unwilling or unable” or what that really means.

To Each Their Own

Despite these problems, the United States, Canada, Australia, and Turkey have embraced this reasoning for their airstrikes in Syria.

Meanwhile, the U.K., as well as France, and Germany have relied on broad interpretations of self-defense. These arguments share a complete disregard for the attribution standard, ignoring as they do the idea that claiming self-defense against terrorists on Syrian territory would require proving Syrian support or control of ISIS.

Both states using the “unwilling or unable test” and those arguing on the basis of self-defense see Syrian authorities as illegitimate and are wary of engagement, even when it comes to using force. In November 2015, U.N. Security Council resolution 2249 “called upon” states to “take all necessary measures” in combating ISIS, the common shorthand for military force. But the resolution does not refer to Chapter VII of the U.N. Charter, nor does it use unequivocal terminology authorizing force. As a result, it also doesn’t provide a clear standpoint on the norms that govern the use of force.

International norms and legal standards ultimately depend on shared understanding and consistent application. Now that states are diverging on when using force against terrorists is legal, the threshold for the use of force has been lowered to a dangerous level. All the while, non-military counterterrorism efforts are apparently less relevant than ever.

To put the brakes on any further destabilizing effects, we need greater clarity about what standards apply to who, and the consistent use of established rules. In a nutshell, we need a new shared international understanding of precisely when it is legal for states to use force against terrorists.

Ingvild Bode is a lecturer in international relations at the University of Kent in the U.K. This article was originally published on The Conversation.