How the West Got China Wrong 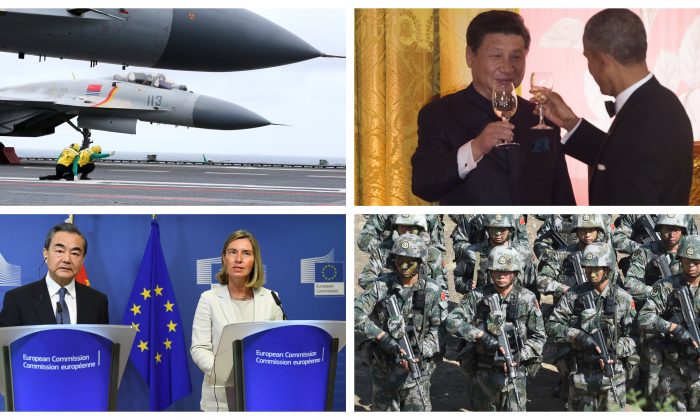 According to author and China expert Gordon Chang, “Western policy toward China fundamentally underestimated the hostility, the belligerence, the relentlessness, the will to power of China’s Communist Party.” (Saul Loeb; Emmanuel Dunand; Indranil Mukherjee; STR/AFP/Getty Images)
By Omid Ghoreishi

ST. CATHARINES, Ontario—What is the No. 1 failure of Western foreign policy? Up until a few years ago, many would have said it was the failure to stop the rise of Hitler’s Third Reich in Germany in the 1930s, says American author Gordon Chang. But now, Chang says, there is a new contender for the top spot: the inability of the West to moderate the behaviour of communist China.

“It’s now time for we in the West to acknowledge mistakes and to end self-delusion,” said Chang, a frequent China commentator and author of the book “The Coming Collapse of China,” in a talk at Brock University in southern Ontario.

The issue goes back to decades of mistaken China policy, but one recent example is how Washington dealt with China’s aggression in the aftermath of the 2012 Scarborough Shoal standoff between China and the Philippines in the South China Sea, Chang said.

Following a U.S.-brokered deal, the Philippines withdrew its craft from the area until an agreement over the ownership of the disputed territory could be reached. However, Beijing didn’t withdraw its forces.

“To avoid conflict, senior White House officials decided not to enforce the agreement that they had brokered,” Chang said. “But what we did by doing nothing was we showed the Chinese that they can do anything they wanted.”

The result was that China went on to increase its military presence in other disputed territories in the region.

“The Chinese were villains, but it’s because the West, and in particular the United States, has allowed the Chinese to become villains. We have forgotten every lesson about how to deal with hardline regimes,” Chang said.

Among the factors putting the West on the wrong course with China is that the West didn’t truly understand the nature of the communist Soviet system, thinking that the Soviet Union was a state like any other, according to Chang.

“Instead of recognizing the empirically belligerent nature of communism, we just thought, well, OK, China’s just another country.”

This mistaken approach could be seen in what Winston Lord, deputy to Henry Kissinger, the former U.S. national security adviser who negotiated rapprochement with China, once said. He said that American policy toward China had to be based on “necessary myths.”

But basing policies on myths had its consequences, one of them being that the Chinese regime never headed toward democracy as a result of closer relations with the West, as many had hoped, Chang said.

“Western policy toward China fundamentally underestimated the hostility, the belligerence, the relentlessness, the will to power of China’s Communist Party,” Chang said.

Drawing on a Canadian connection, Chang pointed to recent comments by the Chinese consul general in Calgary in relation to Canada’s arrest of Huawei CFO Meng Wanzhou at the request of the United States. “Unfortunately, some nations seem to be unwilling to give China a chance,” Lu Xu said in February.

In reality, Chang said, China has had many chances, “and it has exhausted the patience of many.”

Besides worsening pollution, China is facing the issue of water scarcity, which leads to many problems, including inhibition of economic development.

The Chinese regime also understands that it has lost the “hearts and minds” of Chinese citizens, as demonstrated by protests across the country by different segments in society. They include investors, army veterans, aggrieved homeowners, and parents of children vaccinated with expired vaccines, among many others.

“Those point to fundamental discontent in society, and communism has no answer for that.”

China’s demographic crisis is severe, Chang added, with a century-long demographic decline in the projections. The change from the one-child policy to a two-child policy has not created the baby boom that the authorities had hoped for.

“The effect of a severe demographic crisis, like the one China has, is only felt over time,” he said. And that also contributes to the fourth factor, economic decline.

“Even if you believe China’s numbers, China is accumulating debt one and a half times faster than economic output,” Chang said.

So if the world is observing that China in recent times is acting particularly hostile and provocative, “it’s because they’re getting a sense that they are indeed running out of time.”

And, Chang said, “because China is running out of time, so is everybody else.” This means the time is now for the West to change its approach to China, he noted.

“We wagered that we could partner with, reform, make friends with a communist superstate, and we were wrong. And because we were wrong, we will now have to adjust our policies.”