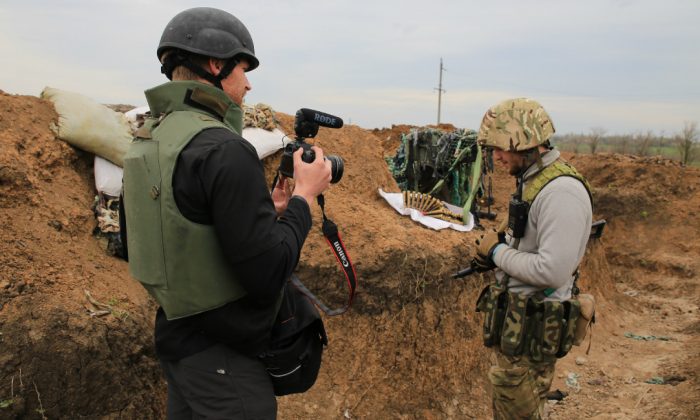 LONDON—For the last year, I’ve been reporting on the Ukraine war. I’ve been back and forth to the front lines, embedded with Ukrainian troops and civilian volunteers. I’ve been on the receiving end of Russian weapons, including tanks, heavy artillery, mortars, machine guns, grenade launchers, sniper rifles, and good ol’-fashioned Kalashnikovs.

I don’t know for sure the nationalities of the soldiers on the other side of no man’s land who were trying to kill me. There’s nothing distinctive about the sound of an incoming shell or bullet that indicates whether the finger pulling the trigger was Russian, Chechen, Serb, or a bona fide Ukrainian separatist.

But I do know this: One cannot buy tanks, heavy artillery, drones, and surface-to-air missiles (like the one used to shoot down MH-17) from a department store in eastern Ukraine. I checked. And one cannot learn how to effectively use this equipment in combat from a YouTube video.

Additionally, the attacks I witnessed were coordinated with drones and other sophisticated technology like communications jamming. Ukrainian troops near the front were instructed not to use their cell phones because combined Russian-separatist forces were using the signals to target artillery. That’s sophisticated stuff, similar to some of the technology the United States uses in combat.

The old maxim in journalism is “Show, don’t tell.” Well, that’s what I saw on the eastern Ukrainian battlefields. You decide whether or not Russia is involved.

After a year of reporting on the war in Ukraine, I decided to take a little time off to cover a war my own country is fighting—Operation Inherent Resolve, the coalition air campaign against ISIS in Syria and Iraq. I was looking forward to the opportunity to be around some fellow Americans, visit the base BX to pick up my favorite energy drink (Blue Monster) and my favorite protein bars (chocolate chip cookie dough Quest Bars), and to be re-immersed in deployed military life.

There was something else I was looking forward to.

“At least while I’m in the Middle East,” I thought, “I won’t be dealing with the Russians for a while.”

You probably know how this story goes. I arrived at an undisclosed location in the Persian Gulf region as the news broke that Russian warplanes, tanks, missiles, artillery, and troops were arriving in Syria. And on Wednesday, Russian warplanes and helicopter gunships dropped bombs north of Homs, 100 miles north of the capital of Damascus, marking the first combat use of Russian air power in the conflict.

According to news reports, Russia has also made diplomatic headway in the region, signing an intelligence-sharing pact with Syria, Iran, and Iraq. Presumably, many pundits assert, these moves are to defend Moscow’s key naval port in Tartus by keeping Syrian dictator Bashar al-Assad in power. Others have a more cynical take on the Kremlin’s moves, however, claiming that Russia is looking to undermine U.S. leadership in the war on ISIS and become the new dominant power player in the Middle East.

Russian President Vladimir Putin alluded to as much during a speech Monday before the U.N. General Assembly, in which he took direct aim at U.S. policy in the Middle East and North Africa: “Rather than bringing about reforms, an aggressive foreign interference has resulted in a brazen destruction of national institutions and the lifestyle itself. Instead of the triumph of democracy and progress, we got violence, poverty, and social disaster.”

Challenging U.S. calls for Syrian dictator Bashar al-Assad to step down, Putin added, “We think it is an enormous mistake to refuse to cooperate with the Syrian government and its armed forces, who are valiantly fighting terrorism face to face.”

“We would like to see a transition in which Assad disappears from the scene,” U.S. Secretary of Defense Ashton Carter testified before the House of Representatives’ Armed Services Committee on June 17, reflecting the longstanding U.S. position on Assad’s fate.

The United States and Russia are at loggerheads in Syria. Consequently, my time on the battlefields of eastern Ukraine became a lot more relevant to the U.S. troops I visited in the region.

While I was in Iraq, I briefed a group of Air Force pararescuemen and combat rescue officers on the Ukraine war. I showed them a video of some combat footage I had shot from the trenches and bombed out neighborhoods, including artillery and tank attacks and lots of small arms gunfights. I felt funny at first, almost embarrassed, explaining my combat experiences to a group of battle-hardened elite troops. But they had a lot of questions. The war in Ukraine, after all, is a different kind of war from the one they have been fighting. And now that Russia has thrown its hat in the Syrian ring, my experiences in Ukraine were more than just a curiosity—they were useful.

The wars in Ukraine and Syria are connected. I told the pararescuers there was a good chance that Russian troops and the combat tactics they used in eastern Ukraine would appear in Syria before long, and that some pro-Ukraine fighters might follow their Russian foes to this new battlefield.

In Ukraine, there are Chechen fighters on the front lines among the volunteer battalions who have fought in Syria against Assad but ultimately decided to fight in Ukraine because they’d “rather kill Russians.” Well, now they can fight Russia in Syria, too.

There are reports that Arseny Pavlov—a prominent combined Russian-separatist commander from the Ukraine war known by the nom de guerre “Motorola”—is in Syria. In an interview with the Georgian Journal, Pavlov said he was a soldier in the Russian army in the Chechen War in the 1990s.

Maybe Pavlov is in Syria on vacation, just like all those Russian troops caught fighting in eastern Ukraine, according to the Kremlin. Or maybe he’s part of Russian military pivot to Syria.

Some consider the Cold War history. Some say it never ended; only the names have changed.

After my trip to Iraq, I traveled to Scotland to give a couple speeches about Ukraine to the Ukrainian Club of Edinburgh. While I was there, I met several Ukrainian veterans from World War II. They had been conscripted to join the Germans and fought against the Red Army in the war. Under Soviet artillery and aerial bombardment, their unit was overrun and annihilated at the battle of Brody in western Ukraine in 1944. They told me stories about brutal hand-to-hand fighting against the Soviets. One explained how he killed Russians with a bayonet.

The few scattered survivors fled west, eventually crossing the Alps at the end of the war to surrender to British and American troops. After a few years in a POW camp in Italy, they were transferred to camps in Scotland, where they eventually settled, learned English, married, and built new lives. For some, adjusting to life after the war was a struggle. They had their demons to deal with from the war, and they were immigrants, exiled from their homeland. They couldn’t return to Ukraine, knowing that re-entering the Soviet Union would mean almost certain imprisonment in a gulag or summary execution at the hands of the KGB.

“I would get in fights a lot,” said Oleksa Demianczuk, a solidly built, energetic 91-year-old with bushy sideburns and a knack for owning a conversation.

Demianczuk speaks perfect English in a Scottish accent, although he breaks into Ukrainian sometimes accidentally, for which apologizes and which he blames on getting old. Late one night at the Ukrainian club after one of my speeches, Demianczuk took the hand of his wife, Krystyna, and danced; he twirled her around long after the rest of us were seated and yawning.

“In spite of everything, life is a very good thing,” he told me.

Now in their 90s, the few surviving Ukrainian veterans have made return trips to post-Soviet Ukraine to visit their long abandoned hometowns and whatever friends and family survived the war and a half-century of Soviet rule.

I asked Demianczuk what he thought about the current conflict.

After Edinburgh, I traveled to London. I had a conversation with an old friend one evening at a pub. She told me the United States is more respected now among its European allies due to a renewed emphasis on diplomacy and soft power. That sounds nice, I thought as I sipped a pint of IPA. I was happy to hear my country is once again en vogue across the pond and that my American accent doesn’t earn me quite as many eye rolls. But, I began to wonder, what price have we paid to be cool again?

I opined to my British friend that the world is a more dangerous place now than it has ever been in my lifetime (I’m 33). I pointed out that state-on-state warfare in Europe is not just a possibility; it’s already happening. Even if it feels like a secret.

But what’s scariest for me, I added, is a “Franz Ferdinand” scenario—that unanticipated event no think-tank expert or political pundit can anticipate, which pulls the bottom out of the shaky house of cards upon which the fate of world peace now rests.

What if, I wondered aloud, Putin overreaches and launches covert operations in Estonia or any other NATO country, as he did in Ukraine? That means Article V if he does. And that means war between Russia and NATO.

“If NATO sees foreign forces infiltrating its sovereign territory, and if we can prove it comes from an aggressor nation—then that’s Article V,” said U.S. Air Force Gen. Philip Breedlove, NATO’s supreme allied commander in an interview with the German newspaper Die Welt in August 2014.

“That means a military response to the actions of the aggressor,” he added.

Or maybe the United States shoots down a Russian warplane over Syria or accidentally bombs Russian or Iranian troops there. Maybe a Russian surface-to-air missile in Syria shoots down a U.S., Turkish, or French jet. Maybe a NATO or Russian military exercise in Eastern Europe is misperceived as an actual attack.

What if a Ukrainian soldier back from the hell of the front lines in the Donbas takes a potshot at Putin? What if a Russian warplane flying with its transponder off over the English Channel or the Baltic Sea collides with a civilian airliner? (According to U.S. Northern Command, Russian heavy bombers flew more out-of-area patrols in 2014 than in any year since the Cold War.)

The “what if” and “maybe” game can go on forever. The bigger point is this: There is diminishing wiggle room in international affairs to absorb one of these unanticipated crises without it leading to a war. And with Russian warplanes now bombing targets in Syria and calling on the United States to ground its flights there, that “Franz Ferdinand” scenario just got a little more likely.

Tensions are increasing to the point that when they are released, it will be with a tectonic shift and not a tepid pop. And despite whatever warm feelings America has rekindled in Europe, “leading from behind” isn’t working.