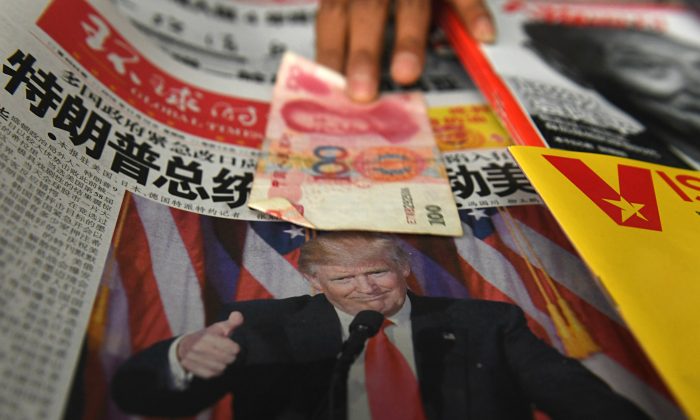 A 100 yuan note is placed above a newspaper featuring a photo of US president-elect Donald Trump at a news stand in Beijing on Nov. 10, 2016. (Greg Baker/AFP/Getty Images)
Business & Economy

How the US Could Win a Trade War With China

US can find a solution for most vulnerabilities; China cannot
By Valentin Schmid

President-elect Donald Trump talks tough on China and has appointed trade hawks Wilbur Ross and Peter Navarro to key positions in his administration. He has threatened to slap a blanket tariff on Chinese goods, and he has spoken directly to Taiwan’s president, something previously regarded as a major diplomatic offense.

According to “Road to Ruin” author James Rickards, this is Trump’s way of opening the negotiations with China to reach a mutually beneficial trade relationship.

“If China makes concessions on these points, he can say, ‘Fine, now my tariff is [lower].’ It’s the art of the deal; people don’t understand that about Trump,”

However, in any deal, the other party also has some negotiating chips on the table, and China, for example, can hurt American companies exporting to China or operating in China.

China would feel the impact of U.S. protectionist measures more than the U.S. would feel any economic retaliation China has at its disposal.

So who has the upper hand in the negotiations? According to a report by research firm Geopolitical Futures (GPF), the United States would suffer some damage in a trade war, but would come out on top in the end.

“China would feel the impact of U.S. protectionist measures more than the U.S. would feel any economic retaliation China has at its disposal,” the report states.

The most important point for both countries is the symbiotic relationship between China the exporter and the United States the importer, between Chinese workers who produce cheap goods and U.S. consumers who buy them.

In an extreme thought experiment, about 15 million Chinese workers in the export sector could lose their jobs if Americans stopped importing from China altogether, a nightmare for the Chinese regime, which depends on employment to keep the people happy and itself in power.

Sourcing these products from somewhere else or producing them onshore will be difficult and almost certainly make them more expensive. However, this is a nuisance compared to the impact of leaving 15 million Chinese people unemployed.

“U.S. dependence on Chinese goods is a matter of convenience,” states the GPF report.  The analysts say the United States has ample spare capacity in manufacturing to eventually make up for the shortfall.

According to the Federal Reserve, total industrial capacity utilization in the United States was only 75.1 percent in October 2016.

“Of course, increasing capacity would not be easy. One caveat is that many of these industry groups have seen their capabilities atrophy after years of dismal performances. But these industries are much like muscles, atrophying in bad times but strengthening in good times,” states the report.

One example is the furniture industry. Seventeen percent of all U.S. furniture sales came from Chinese exporters in 2015. U.S. capacity utilization for furniture was only 75 percent during most of the year. If the United States ramped up production to 100 percent in an unlikely scenario, it could make up for all of the Chinese imports, albeit at a higher price. The same principle is true for many other industries, from textiles to synthetic rubber. One of the major benefits would be decreasing American unemployment.

In the discussion about trade with China, we frequently hear that China has a monopoly on rare earth elements (REE), a critical component for many digital products. If push came to shove, China could simply cut exports to the United States like it did to Japan in 2010.

According to GPF, however, this is another classic example of price rather than actual availability. In 2016, China produced 89 percent of global REEs. However, the United States had its own company producing REEs up until 2015, when Molycorp Inc. had to declare bankruptcy because it could not compete with the low Chinese prices.

GPF estimates that potential production by Molycorp would be enough to satisfy U.S. REE demand, again at a higher price than the current ones from China and with a time lag.

“The result would not be a catastrophe and actually would spawn a capacity for REE production in the United States or another country, such as Australia, from which the United States could import,” states the report.

What happens if China retaliates and slaps tariffs on American products exported to China?

According to GPF, the last time that happened it didn’t end well for China. When President Barack Obama imposed a 35 percent tariff on Chinese automobile and light truck tires in 2009, China retaliated by slapping a tariff on U.S. chicken meat.

The U.S. tire tariff’s impact was limited: Imports from China fell by 50 percent until 2015, only to be replaced by South Korean and other manufacturers. This shows the limit on how many jobs can come back to the United States, but it also demonstrates that the United States is not dependent on China for goods supply.

The same goes for multinational corporations that may have to shift production to other Asian countries should China choose to make life difficult for them.

The tariffs left their mark on the tire industry in China, however. “China’s capacity utilization in the various tire segments industry has fallen to between 50 and 60 percent. Hundreds of tire factories have closed their doors, and Chinese tire makers are cutting prices to the bone just to stay competitive in the market,” states the report.

And what about U.S. chickens? Exports doubled from 2011 to 2016, and total poultry production in the United States increased during the whole period.

“It is likely that future retaliatory measures would yield similar results: a short-term impact for the U.S., followed by a recovery,” states the report.

Although companies like Apple could shift production somewhere else, it would take time and cost money. Starbucks, which makes 5.7 percent of its global sales in China, couldn’t just replace a market of more than a billion consumers. The same is true for Boeing, which earned 13.1 percent of its 2015 revenue by exporting to China, the fastest growing airplane market.

According to the GPF report, both countries would lose in a full-blown trade war, but it is the United States that has the upper hand. Trump understands this, which is why he is pushing China to get a better deal for America. If China also understands it’s in a weaker position, it will be able to avoid a lose-lose scenario.