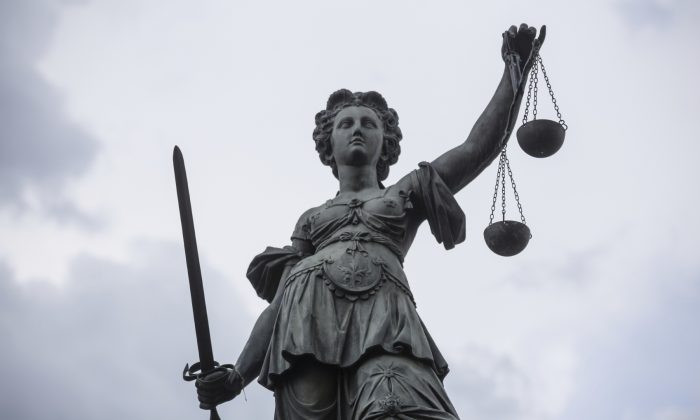 Lady Justice may not be blind after all. (Teka77/iStock)
Opinion

Economic inequality is now firmly on the public agenda as candidates and voters alike look for someone to blame for stagnant wages, entrenched poverty and a widening gap between rich and poor.

While all these factors and others helped increase inequality, they overlook the role of a key American institution that has also helped widen the gap between rich and poor: the Supreme Court.

As my research on economic inequality explains, since the late 1970s and more frequently over the past decade, the court has issued a series of rulings that have benefited businesses and the wealthy at the expense of the working class and the groups that support them. This has, arguably, made it a court for the one percent.

The new court vacancy created by the death of Justice Antonin Scalia, however, provides an opportunity to balance—or further tilt—the economic scales. While Republicans have refused to even consider an Obama appointment to fill his seat, we’re already seeing an example of why balancing those scales is so important.

At the Supreme Court on Tuesday, the eight remaining justices deadlocked 4-4 over whether public employee unions could require nonmembers to pay dues for the work they do negotiating on their behalf. A tie means the last lower court ruling stands, and unions—which have helped reduce inequality—can breath a sigh of relief, for now.

Is this the beginning of a return to a “court for all”? Or will it revert to one that coincided with three decades of worsening economic inequality?

Occupy Wall Street brought the issue of economic inequality to the fore in 2011, but since then everyone from President Obama and Fed Chair Janet Yellen to the pope has highlighted it as a serious problem. Even corporate America has sounded the alarm, concerned that falling incomes will hurt profits.

Currently, the top one percent earns 20 percent of the nation’s income while holding almost 40 percent of its wealth—that’s worse than during the “roaring twenties,” when income was concentrated in the hands of wealthy industrialists. Meanwhile, worker productivity has risen 64 percent since 1979, yet middle-income workers earn no more today than they did during the last days of disco.

Simply put, the widening divide between the haves and have-nots is undermining the American dream.

And the Roberts Court—named after Chief Justice John Roberts, who took the helm in 2005—deserves at least some of the blame.

A study coauthored by conservative federal appeals judge Richard Posner shows that this is the most pro-business court since the World War II. Indeed, the current court’s four conservative justices, along with the late Justice Scalia, make the top 10 list of the most business friendly justices to serve since that time.

If the fortunes of workers and consumers rose with that of business, this bias might not matter. But that is not the case.

Justice Scalia, who had been on the court since 1986, authored five opinions that push workers and consumers out of court and into costly and ineffective arbitration.

For instance, in the 2011 case AT&T v. Concepcion, consumers filed a class action lawsuit after they were charged over $30 for a supposedly free cell phone. Scalia authored the 5–4 majority opinion in overturning a state law that allowed consumers to join a class-wide arbitration. In dissent, Justice Stephen Breyer explained how the case is the deathknell for such small claims because most consumers do not have the knowledge or resources to arbitrate on their own.

Scalia’s antipathy toward class actions is also evident in his 5–4 majority opinion in Wal-Mart v. Dukes. There, he held that women workers of Wal-Mart could not bring a class action against the retailer for paying and promoting them less than men. Wal-Mart, he argued, was simply too big to discriminate and could be trusted to be fair.

In these cases and others, Scalia handed businesses the ability to insulate themselves from liability. This leaves employees and consumers without the tools to challenge abusive practices that can depress wages and lead to economic losses.

The Supreme Court has also, I would argue, reinforced three decades of wage stagnation by denying workers the tools to improve their conditions and pay.

One way it has done this is by clobbering unions, which back in the 1970s represented a quarter of all workers. Now it’s just 7 percent, despite the evidence they bring benefits to workers, such as the union wage premium of 13.6 percent and improved odds of health insurance and pensions.

Another is in Harris v. Quinn, in which the court ruled that home health care workers did not have to pay dues to unions for representation in collective bargaining. By reducing their resources, the court limited the ability of unions to improve working conditions for these low-wage workers. As Justice Elena Kagan stated in dissent, collective bargaining had helped Illinois’ home health care workers double their wages, achieve safer workplaces and obtain health insurance.

Without meaningful collective bargaining, these hard-fought gains by a historically disadvantaged and vulnerable group of mostly female workers may be lost.

A Court in the Balance

The union case decided on Tuesday is a perfect example of the power of a single justice to reshape the court’s impact.

When the justices heard oral arguments in the closely watched case of Friedrichs v. California Teachers Association in January, Scalia and his four conservative colleagues signaled that they would strike down collective bargaining laws making fees compulsory for public employees.

Public unions were preparing for a significant blow to their power. If these laws (which exist in 23 states) were invalidated, union resources would be sapped, thus hobbling their ability to advocate on behalf of workers.

Scalia’s absence changed the outcome significantly (though 4–4 rulings can’t set precedents like majority ones). Given the current fissures in the court’s makeup, the next justice may well have the power to shape key features of our economy and its workers’ lives in the future.

Of course, Supreme Court rulings alone didn’t cause economic inequality. Inequality is primarily driven by economic trends that benefit the one percent, and government policies with regard to tax, labor, finance, and corporate compensation all fuel this divergence.

The Supreme Court plays a role in this domain as well. We may think of the court as apolitical, but the truth is that the justices shape politics in many ways.

In 2010, in Citizens United v. FEC, the court overturned decades of precedent and dismantled Congress’s attempt to rein in corporate political spending and as a result amplified the political voices of the rich.

Scholars have already established that Congress is more responsive to the desires of the wealthy than the less affluent. Citizens United reinforces this trend. Escalating campaign expenditures feed political polarization, as a small group of extremely wealthy contributors can focus their funds on politicians who support their ideology.

Citizens United and its progeny have led to a flood of outside spending on elections and a rise in American cynicism about the political process. Prior to Citizens United, there was no such thing as a super PAC. Since 2010, as the Brennan Center reports, super PACs have spent $1 billion on political campaigns, 60 percent of which was generated from just 195 donors.

Meanwhile, the court has squashed the political voices of the poor and working class. The court has upheld onerous but useless voter identification laws (Crawford v. Marion County) and struck down sections of the Voting Rights Act that previously led to increases in minority voting and the numbers of minority elected officials (Shelby County, Alabama v. Holder).

Overall, a pattern emerges. By giving corporations the rights of people, this court has ruled that corporations can hold religious beliefs and make unlimited campaign contributions as a matter of free speech. At the same time, workers, consumers, and voters—actual human people—are losing rights.

Further, the court is stripping them of the tools that can level the playing field, such as class actions, access to the courts, union organizing, and fair election laws. In short, the court is crushing collective action.

The coalescing of power at the top compounds economic inequality, as the wealthy amass disproportionate influence over lawmakers and the funds to develop litigation strategies that favor their interests.

This wasn’t always the case. During the postwar era to the late 1970s, America had shared prosperity, largely as a result of government policies such as the GI bill (which sent vets to college), a progressive tax system, and a strong labor movement. Thirty years ago, the top one percent earned 12 percent of the nation’s income. Today, that number is about 21 percent.

A popular conception of the Supreme Court is that it is designed to protect vulnerable minorities from majoritarian rule. Instead, the court of recent memory has enhanced a powerful minority at the expense of the majority.

I believe we currently have a court for the one percent. The next justice will hold the deciding vote in making it a court for all.

Michele Gilman is venable professor of law at the University of Baltimore. This article was originally published on The Conversation.