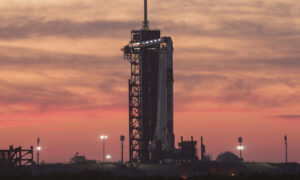 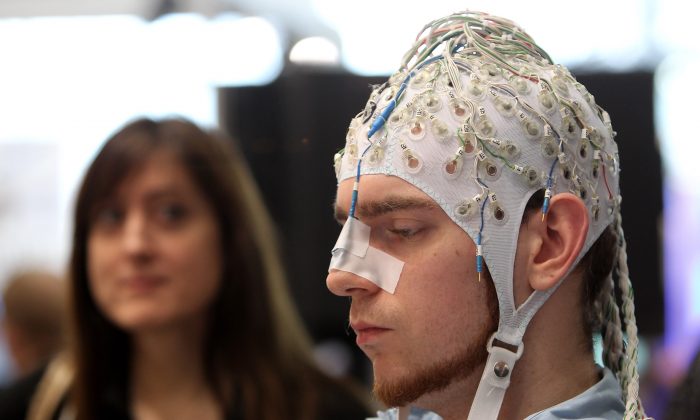 A young woman watches a man, wearing an EEG brain scanning apparatus on his head, play a pinball game solely through willing the paddles to react with his brain at the Berlin Brain Computer Interface research consortium stand at the CeBIT Technology Fair in Hannover, Germany, on March 2, 2010. (Sean Gallup/Getty Images)
Science

The recent announcement that a young paralyzed man in Ohio in the United States named Ian Burkhart managed to regain the use of his fingers after having a chip implanted in his brain is an exciting step forward for science and healthcare. In fact, you may now be wondering how long it will be before we can unlock a door, turn on a kettle, or even send an email simply by thinking about it?

The Ohio breakthrough used a technique called functional magnetic resonance imaging (fMRI) to identify the pattern of electrical impulses in the part of the brain that controls movement—the motor cortex—that was generated when Burkhart thought about using his fingers. The system learned to recognize this pattern when it appeared in his brain, and then instruct receivers to stimulate his arm muscles to make the appropriate movements.

This might produce life-changing results for people with disabilities, but it has limited potential outside the body. It is about sending movement instructions to parts of the body that cannot be reached in the usual way. We might be able to use it to make a robot reproduce our movements, but that may be the limit.

Is Communication From the Future Already Here?

Having said that, we have already discovered ways of manipulating foreign objects. Three years ago, I demonstrated a modified Scalextric set at the Lancashire Science Festival that enabled people to make the cars go faster round the track simply by concentrating harder on them. Hundreds of people were able to try this using a Bluetooth headset called the Neurosky Mindwave, connected to nothing more than a laptop and a simple microcontroller.

The technology behind this shift from the telekinesis of sci-fi movies or comic books into the real world is electroencephalography, or EEG. This monitors the brain’s electrical activity using electrodes placed on the scalp. The data is then processed to see the underlying frequencies in these impulses, which are associated with different kinds of brain activities. The alpha frequency band is associated with wakeful relaxation with closed eyes, for example, while the beta frequency is associated with normal waking consciousness.

The headsets in my demonstration transmitted this information to the laptop, which used algorithms that recognize concentration as a combination of different impulses: increasing on several frequencies while falling on several other frequencies at the same time. When it detected this, it instructed the microcontroller to increase the amount of power going to the Scalextric. There is an art to making the system work well: sometimes people find the cars going faster even though they didn’t think they were concentrating. I found I made the cars go faster by doing the alphabet in my head; and could slow them down by looking at a blank wall. Everyone is a bit different.

There are now commercial toys available that use the same technology. One example is the Star Wars Force Trainer, where EEG—not Jedi power—enables users to elevate a ping-pong ball using just their mind.

There are also serious potential applications. To try to make computer programs easier to use, for example, researchers have studied EEGs to discern the amount of cognitive effort someone expends on different elements of a program. I have studied the brain activity of experienced archers and found a difference in impulses between “good” and “bad” shots. This might enable coaches to tell players when they are in the right mindset, while players might be able to train their minds to achieve better results.

The Trouble With Thoughts

These are promising developments, but they are all looking more at the “global” activity of the brain rather than someone’s thoughts. There is a very big difference. For instance, researchers have built an EEG-powered electric wheelchair, but it runs into problems when a hazard appears. The user is prone to start concentrating on the hazard, and because the system can’t tell one kind of concentration from another, the wheelchair keeps moving and the person could end up in danger. To get around this problem, researchers added a secondary control system that allows the user to touch a pad to allow the wheelchair to move and touch it again to disable it—with moderately successful results.

The brain is a very complex organ with multiple areas responsible for many different kinds of activity. It is a major challenge to unpick everything and isolate “thoughts” from the data. The limit of current technology is to attach numerous electrodes to the scalp and measure the activity in different areas of the brain at the same time. Because different areas govern different actions, this makes it possible to use algorithms to detect whether a person is thinking of, say, moving their left or right arm. This might allow a slightly more sophisticated means of brain-powered wheelchair control, for instance. But while this is starting to get closer to thought control, it is still rather global and has to be tailored to the individual subject since the exact patterns of brain activity vary from person to person.

In future, we may well gain a greater understanding of the structure and function of the brain. Together with more sensitive electrodes and more computer processing power, this might make it possible to further develop this brain-to-computer interface into a more accurate system that can adjust to the variations between one person and the next. This might make it easier for someone who would otherwise be paralyzed to control a device or communicate.

Even then, that would still be quite a way from true “thought” control. It is already possible to switch on a kettle through concentration using EEG technology, but we are still some way from being able to think a range of different instructions to different objects attached to a single system. As for sending emails, it looks like we will be typing for some time to come.

Stephen Sigurnjak is a senior lecturer in electronics at the University of Central Lancashire in the U.K. This article was originally published on The Conversation.