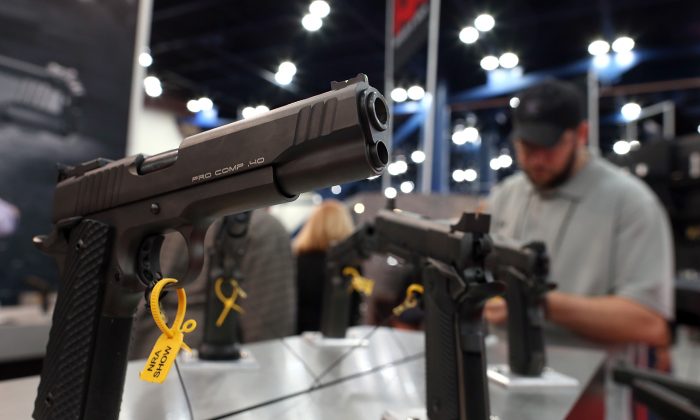 Handguns are displayed in the Para booth during the 2013 NRA Annual Meeting and Exhibits at the George R. Brown Convention Center on May 5, 2013 in Houston, Texas. (Justin Sullivan/Getty Images)
Opinion

How the NRA Makes Sure Criminals Have Guns

Based on the Center for American Progress Report: Blindfolded, and with One Hand Tied Behind the Back
Fourth in the Multi-part The NRA: A Criminal’s Best Friend Series.

The National Rifle Association’s (NRA) sanctimonious marketing position is: Criminals don’t follow laws and they are armed. We good guys need to be armed because the bad guys are!

However, A closer look at the laws that the NRA supports shows that sales to criminals are a big part of gun dealers’ booty. Yes, the NRA literally makes money for manufacturers by enabling guns sales to criminals. Then it makes more money from saying criminals have guns so everyone else should too.

The NRA may talk about patriotism and constitutional rights but it is essentially a trade group for gun manufacturers.  It is no different than the trade groups for the insurance or soft drink industries. Its only goal is product sales.

One way the NRA helps criminals obtain guns is a rider included in the 2004 Tiahrt amendments that blocks the Bureau of Alcohol, Tobacco, Firearms and Explosives (ATF) from requiring dealers to conduct an annual inventory. “This is not an idle concern,” according to the Center for American Progress. “During the inspections that ATF is able to conduct with its limited resources, tens of thousands of guns are discovered to be lost or stolen each year.”

Since there are only around 600 inspectors to monitor roughly 60,000 federally licensed firearms dealers, five years will often elapse between inspections. An inventory that accounts for every gun that has passed through a dealer’s doors is the only way to discern if guns have been diverted and are unaccounted for–an inventory that cannot, by law, be required. Thank you, NRA.

Requiring such an inventory  would help prevent in gun violence. Riverview Sales, the gun dealer where Adam Lanza’s mother legally purchased the guns used in the Sandy Hook attack in Newtown, has a history of losing track of weapons in its inventory and gun thefts by employees and customers, according to the Center for American Progress. “In 2011 ATF discovered that nearly 18,500 guns were unaccounted for during the course of 13,100 firearms compliance inspections. In 2012 the inspection of just one gun dealer revealed that 997 guns were unaccounted for and an additional 93 guns had not been logged in as inventory, a sign of illegal sales.”

Blocking of inventory requirements is just one way in which NRA-driven laws enable dealers to feed the criminal market, make money for gun manufacturers and escape prosecution. A bartender who over serves a customer is more closely regulated. The NRA says it wants to keep guns out of criminals’ hands while it pushes through laws that help dealers do the opposite.

Use your economic power to force gun laws.
Boycott Starbucks
Make the Tell and Compel pledge

Note: The views expressed in this article are the author’s own and are not necessarily representative of Epoch Times.