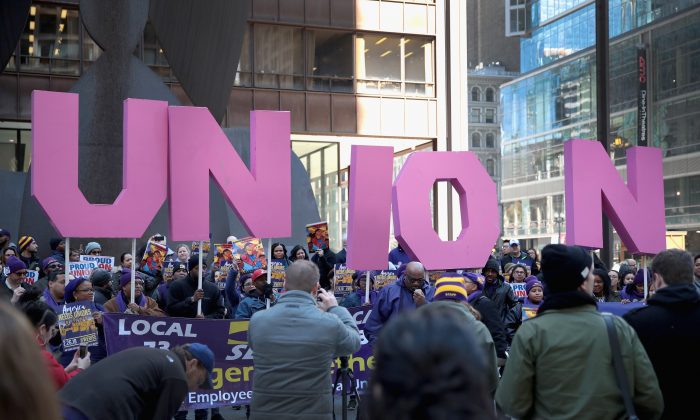 How the Janus Decision Affected Union Workers in California

In the eight months following the Janus decision in June, 48,598 California government employees stopped paying their union dues, according to a California Public Records request. However, if these teachers are no longer required to pay their dues, why are they not leaving in larger numbers? And how did the Supreme Court decision affect California’s unions in general?

The Epoch Times spoke with Rebecca Friedrichs, a former public school teacher and charter school advocate, based in Orange County, who was one of the leading plaintiffs in the Janus decision, along with Mark Janus himself. She was also the lead plaintiff in the Janus decision’s predecessor case, Friedrichs v. California Teachers Association in 2016. This case was indefinitely postponed due to the death of Justice Antonin Scalia, leaving the court equally divided. The Janus decision eventually brought her case back to the limelight.

The Janus decision found: “The First Amendment is violated when money is taken from non-consenting employees for a public-sector union; employees must choose to support the union before anything is taken from them. Accordingly, neither an agency fee nor any other form of payment to a public-sector union may be deducted from an employee, nor may any other attempt be made to collect such payment, unless the employee affirmatively consents to pay.”

When asked about the effects the decision had on Orange County public sector unions, Friedrichs noted, “The unions that are getting the most opt-outs are from employees who aren’t bullied every day from union reps and coworkers.”

She noted that these are primarily workers who aren’t in an office environment where there is consistent interaction with co-workers, such as home health care workers.

Friedrichs pointed out that while there have been a significant amount of union workers no longer paying dues, when people opt out, they raise dues on existing members.

Got to love brave women. https://t.co/7FiuyweMRh

She further added that thousands of teachers across the state are pressured to stay in their unions. She pointed out that most teachers tend to be fond of their local union and don’t want to leave, even if they don’t share the same fondness for their union at the state and national level.

When a teacher opts out of the state or national union, she points out, they are forced to leave their local union as well. This often leads to them being ostracized and alienated by their coworkers.

Friedrichs also shed light on another factor that explains why teachers aren’t opting out in larger numbers. Their unions tell them that they need liability insurance in the case they are sued on the job.

What is not told to them, she says, is that private insurers have cheaper rates and offer $2 million coverage, double the $1 million that unions offer. Additionally, Friedrichs adds, unions are selective about when they defend teachers in lawsuits.

Many private insurers will defend teachers in the case of being sued or a workplace incident. This information, however, isn’t provided to teachers and is intentionally covered up in order to make teachers believe that the unions are their only solace, she added.

Friedrichs described the environment for freethinking teachers as a culture of fear, intimidation, isolation, and ignorance.

In her personal experience, Friedrichs says that as a teacher she was pressured by her union to phone bank to defeat voucher propositions. When she declined to do so, she was isolated for the entire school year.

“Union representatives made sure no one associated with me,” she added.

Friedrichs described the amount of money that the two largest teachers’ unions in the nation, the American Federation of Teachers (AFT) and the National Education Association (NEA), raise on an annual basis.

According to Friedrichs, the AFT takes in $1.7 billion and the NEA $3 billion annually from union dues, totaling out to $4.7 billion between the two organizations. The average teacher pays around $1,000 a year to the union in dues. A large quantity of this money is used for political fundraising of largely Democratic Party candidates and initiatives.

The AFT spent $20 million on supporting political initiatives nationwide in 2018. In total, the AFT spent $2,103,889 on Democratic candidates and $6,500 on Republican candidates for the 2018 midterm election cycle.

Friedrichs concluded by saying that “Most teachers don’t have the time to read the news and are isolated from information because of their busy schedules. On top of this, unions have monopoly control over email and mailboxes at the workplace and, therefore, control the information that teachers have access to.”

As the Janus decision is still less than one year old, the effects of the fallout from the case are still preliminary. It will take time to see whether the removal of mandatory union dues from public sector unions will have a significant effect on their ability to project power politically or whether their tactics to maintain member loyalty will be strong enough to prevent a mass exodus.

Friedrichs also heads For Kids and Country, an educational non-profit aimed at “Uniting, Educating, Engaging and Empowering Parents, Teachers, Students, Faith Leaders, and Citizens in the fight to restore America’s schools and culture.” Friedrich and her associates have been advocates for charter schools and voucher systems. She has authored a book on exposing teachers’ unions’ intimidation methods titled “Standing Up to Goliath.”