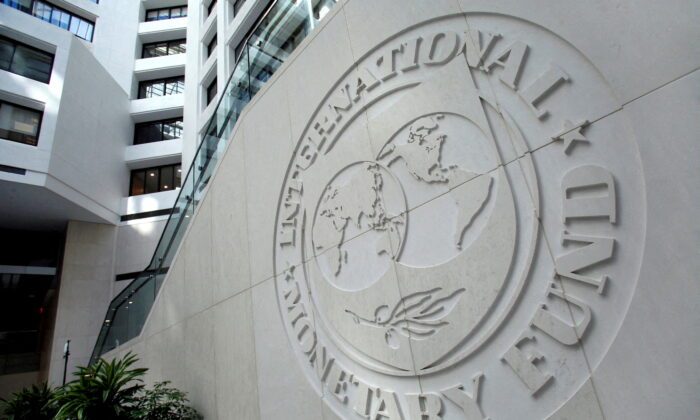 The International Monetary Fund logo is seen inside its headquarters at the end of the IMF/World Bank annual meetings in Washington, on Oct. 9, 2016. (Yuri Gripas/Reuters)
Viewpoints

How the IMF Proved Its Own Recommendations Wrong

The latest International Monetary Fund (IMF) global economic outlook has just been published and, like all of them, it has many interesting aspects.

It acknowledges the economic slowdown in many economies and has dramatically increased the Fund’s inflation estimates. Global growth is now “projected to slow from an estimated 6.1 percent in 2021 to 3.6 percent in 2022 and 2023. This is 0.8 and 0.2 percentage points lower for 2022 and 2023 than projected in January.” Estimates for 2022 of inflation projections have risen to “5.7 percent in advanced economies and 8.7 percent in emerging market and developing economies—1.8 and 2.8 percentage points higher than projected last January.”

The IMF highlights the reality of poor growth and massive inflation. And why such poor growth and high inflation? They’re due, in no small part, to the previous recommendations of the IMF to spend without control and monetize debt with central bank money supply growth.

Realizing that the previous estimates were all too optimistic, and that the third consecutive slash of growth estimates and hike of inflation projections spell trouble for the global economy, the IMF, as always, has made a series of recommendations that will not surprise anyone: raise taxes, without making a single mention of excess spending or unproductive subsidies.

The IMF recommended governments spend without control, harming potential growth in the process, and now that debt has ballooned, it wants the same governments to raise taxes to mitigate the disaster created by its own recommendations. Either way, taxpayers and the productive sectors suffer.

The IMF reports would be extremely interesting and very valid if they didn’t incorporate excessively optimistic predictions of growth from government spending and, above all, recommendations that rarely work, because the IMF too often underestimates government malinvestment and perverse incentives to bloat government budgets with unproductive current spending.

While the IMF has numerous studies showing that the multiplier effect of government spending is very low and in open and indebted economies it’s even negative, the board continues to recommend massive spending in periods of crisis. And when it doesn’t work, as always, and debt soars, they suggest massive tax hikes. The available economic literature shows the poor fiscal multiplier of government spending, and IMF studies themselves conclude that multipliers are negative, particularly in the longer term and when public debt is high (pdf).

In a recent CNBC event, Kristalina Georgieva of the IMF recognized the following: “I think we are not paying sufficient attention to the law of unintended consequences. We take decisions with an objective in mind and rarely think through what may happen that is not our objective. And then we wrestle with the impact of it.

“Take any decision that is a massive decision, like the decision that we need to spend to support the economy. At that time, we did recognize that maybe too much money in circulation and too few goods but didn’t really quite think through the consequence in a way that upfront would have informed better what we do.”

They didn’t think of the consequences? Not for lack of information. The IMF has ample and detailed literature showing the negative impact on growth of enormous government spending plans, the poor effectiveness of tax hikes to achieve fiscal consolidation, and the risk of rising inflation from monetizing deficit spending programs.

Why does the IMF board recommend something it knows won’t work? Because the pressure from politicians is enormous. The IMF seems to be indirectly forced to propose unorthodox and counterproductive measures so no one can accuse it of defending austerity, even if the suggestions are doomed to fail, as all of us knew in 2020.

The problem is that the results of the previous recommendations are hugely disappointing, and the remedies proposed—massive tax hikes to curb rising debt—are even more negative. The IMF knows from its own 2010 report that tax hikes won’t reduce debt effectively because governments will keep spending above receipts, but they will hurt growth, jobs, and investment.

Now the radical left is quoting the IMF constantly on its messages warning against tax competition and defending a minimum corporate tax, even when the vast literature shows that both tax competitiveness and adjusting fiscal policies to the reality of each country have proven to be far more effective at reducing poverty and boosting growth than massive government spending plans.

The IMF board seems to have forgotten the poor results of its recent spend-and-debt recommendations and finds that it may be politically more acceptable to pass the bill to taxpayers and, when the next crisis comes, propose more spending and debt.