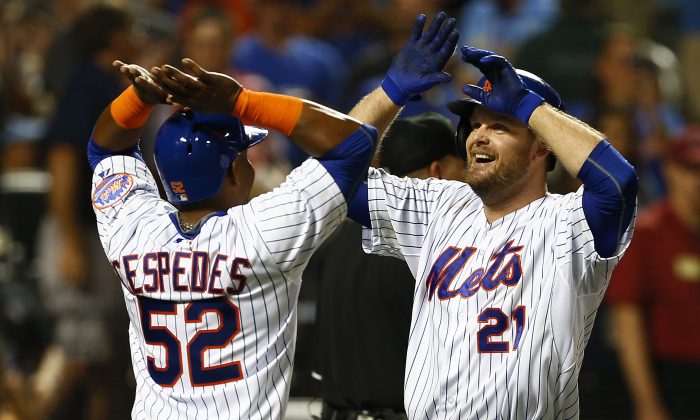 The starting-pitching-heavy squad entered July 31–Aug. 2 series against Washington down three games in the division race. Less than a week later, they have a two-game lead over those same Nationals.

What a difference six days can make.

It hasn’t been an ordinary six days though. The Mets, and GM Sandy Alderson, have played with a retooled offense—obtained without sacrificing their top-flight starting rotation, that’s currently fourth in the league with a 3.29 ERA—despite being without the talented Zack Wheeler.

But the rotation hadn’t been enough for the Mets.

Related Coverage
Why the Royals Had to Make the Cueto Deal

Roughly two weeks ago on July 24—the same day New York fell to the L.A. Dodgers to put their record at 49–48—the Mets traded minor-league pitchers John Gant and Robert Whalen to the Braves for veteran utility players Kelly Johnson and Juan Uribe.

While it’s hard to put a finger on exactly what has clicked right in New York, adding a slugger like Cespedes, who has certainly hit well in his five games in New York with a .318/.348/.455 (average/on-base/slugging) batting line, can really make a difference in a hurry.

Back in 1993, back when baseball’s elite postseason consisted of just four division-winning teams, the Braves were on the outside looking in when the trade deadline was approaching. Atlanta was as many as 10 games behind the red-hot Giants in July, but that didn’t keep the two-time defending NL champions from being aggressive and adding slugging first baseman Fred McGriff to an already deep lineup.

The result of the trade was immediate. Arriving on July 20, McGriff sparked the team to 11 wins in his first 13 games and overall the Braves went an incredible 50–17 with him the rest of the way. By mid-September the still-hot Braves had finally caught up to the Giants and when they won on the final day of the season—to break a first-place tie—Atlanta had the division with a 104–58 record.

Of course, it didn’t hurt that the Braves had three Hall-of-Famers in Greg Maddux, Tom Glavine, and John Smoltz in their starting rotation.

Wheeler, along with Matt Harvey, Jacob deGrom, and Noah Syndergaard, have a ways to go before any of them make the Hall, but getting the Mets to the playoffs this year would be a start.