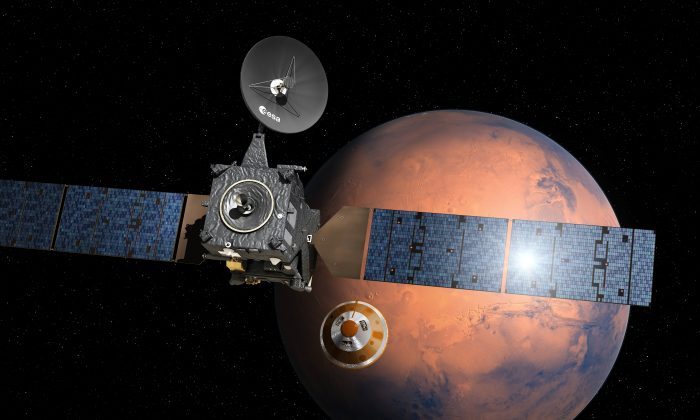 “It (could be) life Jim, but (perhaps) not as we know it.” This is not just a sci-fi catchphrase, but also something some planetary scientists have uttered in response to the discovery of methane in Mars’ atmosphere. That’s right—scientists believe that some kind of past or present microbial lifeform on Mars could have produced the methane. While it is far from the only possible explanation, it is actually so plausible that a special mission is being sent there to find out.

The first part of what could be a series of missions—the European Space Agency’s ExoMars Trace Gas Orbiter—launched on March 14 from Baikonur in Kazakhstan and I watched nervously after having spent 13 years working on one of its instruments. Needless to say, it was one of the most exciting and nerve-wracking days of my life.

The mission is an orbiter that will map trace gases in the atmosphere of Mars, over an entire Martian year (two Earth years). Of course the methane in the atmosphere doesn’t have to be from microbial life, it could also be caused by cosmic dust or geological processes. ExoMars will test for current geological processes that might be releasing the methane. If all goes well this mission will be followed by a more ambitious ExoMars Rover, designed to test for traces of ancient life, that will launch after 2018.

The first proposed observations of methane plumes on Mars was made over a decade ago, from Earth. The data required a lot of processing, and led to controversy among planetary scientists.

According to our current understanding of atmospheric chemistry, methane on Mars should be destroyed relatively rapidly (on the order of a few hundred years). That means it is a gas that we shouldn’t really be seeing on Mars—unless there is some active process creating or releasing it. On Earth, the majority of methane in the atmosphere comes from biological organisms, which raises the question of whether Mars could also host life—past or present.

ExoMars Probe Being Prepared for Blastoff to Mars

The orbiter is uniquely designed to map the minute constituents of the Martian atmosphere (such as methane), using a set of highly specialized spectroscopic and imaging instruments. The spectrometers, which can analyze what a gas is made of by measuring the specific wavelengths of sunlight they absorb, are key to measuring the presence of methane and other gases. The relative mixture of the gases observed, along with their composition, can be compared to measurements on Earth in order to provide clues as to whether the origin of the methane could be geological or biological.

I co-led the development of one of these methane-sniffing instruments, NOMAD, with colleagues from the U.K. and Belgium. Having worked on it for the last 13 years, it has been one of the most important achievements in my career.

The spacecraft will get to Mars in mid-October. The first thing it will do is to eject a technology demonstrator, the Schiaparelli lander, to prove that Europe can successfully reach the surface of Mars. The lander will provide a few days of surface weather measurements, lasting as long as the batteries on the lander permit.

In the meantime, the orbiter will begin maneuvers to get into a circular orbit. It will use a fuel-free braking process called “aerobraking” (a somewhat terrifying concept of delicately dragging the spacecraft through the very top of the atmosphere in order to use the friction from the gas molecules to slow it down). This presents another first for Europe, in performing this type of dangerous maneuver around Mars.

What to Do If We Find Life

So what would happen if we learned that there is microbial life on Mars, or that it has existed there in the past? Well it would only challenge everything we know. We would have to come to grips with not having a unique status in the universe and will have to work out how to include extraterrestrial “life” in our existential or religious beliefs—to name a few.

On a scientific level, there’s a lot at stake. Of course, it would also lead to major new efforts to find life on planets beyond Mars and even beyond our own solar system.

Laser Propulsion Could Get a Probe to Mars in 3 Days, Scientists Say

The first challenge if life is ever detected will be to prove that we didn’t bring it there from Earth—a difficult task to achieve. Careful cataloguing of the “bioburden” load on the spacecraft and from the cleanrooms it was assembled in can provide a check on what organisms might have been present on the spacecraft when it left the Earth. Fundamentally though, life that arose beyond the Earth would likely result from subtly different chemical processes, so to find out for sure, a detailed in situ biochemical analysis would be required.

The implications for future exploration of the Solar System are also profound—at present we take great care not to contaminate areas that are considered “special regions of relevance to potential life;” knowing with certainty that life is present will likely impose even stricter cleanliness requirements for any future exploration. In this respect, there lies an interesting debate for the future: should we pursue human exploration of a world that has been found to harbor life?

But even if we don’t find life, the benefits are huge. Ventures like the ExoMars orbiter have taught us to overcome a number of technological challenges, such as miniaturizing sophisticated instruments and increasing technical performance, which also underpin many devices we use in everyday life. The skills developed are also of vital importance. Building such a complex spacecraft requires technical, management, software and creative skills that are directly applicable to many different industries and vocations. Pushing the boundaries of what is technically possible to achieve groundbreaking new science is what triggers the leaps that take us forward.

Manish Patel is a senior lecturer in planetary sciences at The Open University in the U.K. This article was originally published on The Conversation.