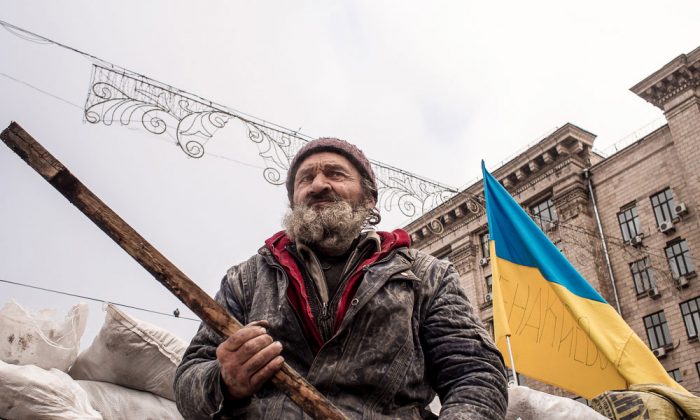 Perhaps the Quad can do a better job. (streetwrk.com, CC BY-ND)
Crisis in Ukraine

How the EU Could Help Save Ukraine at the Eleventh Hour

Ukraine is disintegrating before our eyes, with escalating anarchy, civil war and proxy war with Russia, and dozens killed in Odessa on Friday. Acting President Alexander Turchinov officially declared that Kiev is powerless to resume control of Donetsk and Lugansk, but then the day after launched a major assault on Slaviansk. The Geneva Quad agreement of 17 April is ignored. The viability of the presidential election scheduled for 25 May is threatened by boycotts in the east.

With the political dynamics out of control, political leaders have now together to decide how to stop this insanity of Ukrainians killing each other. The Geneva agreement had promising content and, crucially, quadripartite support. It has now to be built upon, but this time with decisive effectiveness. Even if Russia is to be criticised, it will not be crippled by the sanctions, certainly not in the short-run, and meanwhile the growing anarchy and violence in the eastern regions brings increasing calls for Russian protection, ie. a “peacekeeping” invasion.

The EU should call immediately for a second Geneva meeting of the Quad. This time the agenda should be decisive reinforcement of the OSCE mission, or its replacement by a new tripartite peace and order enforcement mission, but in either case led jointly by Ukrainian, European and Russian uniformed and flagged troops and police. Each armoured personnel carrier, whether Ukrainian, Russian, or European, should carry three large flags.

Recall Berlin 1945, with the patrol jeeps manned by that quad, of British, French, Soviet and US troops, for a little inspiration while of course not a model.

This tripartite operation would represent a huge act of political choice and reconciliation to change course, from one of virtual war between Ukraine and Russia, and of overt political confrontation between Russia and the EU over their common neighbourhood. Given the divided loyalties and identities of Ukraine, this country should have good relations with both its neighbours, who should work together constructively to this end.

The operation can be simply described. First dismantle and clean up the Maidan in Kiev. It would suffice there for just a few armoured personnel carriers, crucially carrying three big Ukrainian, EU and Russian flags to move in alongside a bulldozer and with trucks to carry away the debris.

Then move on into eastern Ukraine, especially Donetsk and Lugansk, which will require much larger contingents, but the same formula. Kiev would end its military operations. Light military vehicles, jointly manned and flagged with Ukrainians, Europeans and Russians, would escort bulldozers to demolish road blocks and barricades, and demand evacuation of the public buildings. While Donetsk and Lugansk will be the toughest part of the operation, the other eastern regions, from Kharkiv to Odessa, should see lighter patrol and stand-by contingents to prevent further contagion of the violence. The deployment of the triple-flagged contingents should be preceded by a massive information campaign from the leaderships of all Quad parties to explain that together they had resolved to go for this peaceful, strategic solution.

No US or NATO Presence

For the EU this would be a regular but vital security and defence policy mission. The resources required are available. There is no lack of European military or policing capabilities for this kind of operation, and thanks to the EU’s enlargement ten years ago, no shortage nowadays of Russian-speaking EU peacekeepers. For Russia this is the only way a temporary military presence in Ukraine could avoid the stigma of invasion. The failing Ukraine state would be rescued by the huge political symbolism and reality of the three flags working together.

While the Quad would sponsor this reinforced operation, neither US nor NATO presence in the joint operation is necessary technically nor plausible politically. The proving of the tripartite operation would be grounds for suspension of the US as well as European sanctions against Russia.

Should the new tripartite brigade be authorised to use lethal force if there is resistance? Better not get into who would give the orders to fire. If there were refusal to cooperate and a stand-off the matter should be taken to the highest political level, for Russia with the EU and Ukraine together to order evacuation of the buildings explicitly both on the spot and with leaders taking their case to the TV channels. If there is still no cooperation the Quad would concert together on further steps.

This tripartite process should also lead on to further political understandings. The May 25 presidential election would go ahead correctly in the whole of Ukraine, but could be accompanied by referendums is some eastern regions with the question: “Would you prefer for your region to remain part of Ukraine alongside a process of constitutional reform to guarantee adequate regional safeguards on matters of languages and decentralised competences; or would you prefer separating from Ukraine and joining Russia?” Opinion polls consistently say that simple majorities would support the first alternative, even in Donetsk.

If the new post-May 25 authorities in Kiev wish to go ahead and sign the Deep and Comprehensive Free Trade Agreement (DCFTA) with the EU, there should be completion of the process initiated at the June 2013 EU-Russia summit to examine any possible unintended harmful consequences of the DCFTA for Ukraine-Russian economic relations.

The EU should now make such proposals with the utmost urgency. The US would be glad to see the EU, whose flags have been flying in Kiev like the Russian ones in Donetsk, take up its responsibilities. Russia has already advocated trilateral solutions. The chances are that the overwhelming majority of Ukrainians would be mightily relieved. This short-term action should also have long-term strategic consequences for the European order, if it initiated a switch by the EU and Russia into cooperative mode over their common neighbourhood.

Michael Emerson is a former EU ambassador to Moscow. CEPS is a politically and financially independent research institute.

As U.S. Pledges Sanctions, Arms Deal With Russia Under Fire

Some lawmakers are urging the Pentagon to end its contract with a Russian arms manufacturer in response to the crisis in Ukraine. (Newsy)

Gun shots in the eastern Ukrainian city of Slaviansk Sunday. Armed pro-Russian separatists control the center of the town and government forces have taken positions at checkpoints around the city. (Reuters)