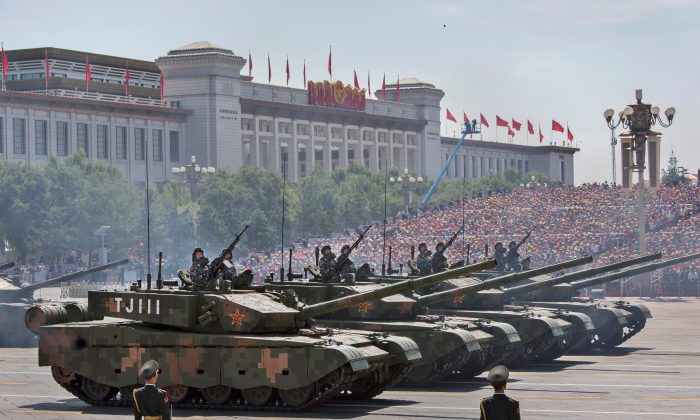 Chinese soldiers ride in tanks as they pass in front of Tiananmen Square during a military parade to mark the 70th year since the Allied victory in World War II in Beijing on Sept. 3, 2015. (Kevin Frayer/Getty Images)
The Dead End of Communism

Gathered before a museum in suburban Beijing, soldiers and schoolchildren stood in silence last week to commemorate the 78th anniversary of the start of World War II in China, a conflict that claimed the lives of about 20 million Chinese.

But also muted is a candid memory of this brutal struggle for survival, in which the Chinese Nationalist government victoriously led the country’s eight-year-long war of resistance against Japanese invasion—before being ousted in 1949 by communist forces following an additional four years of civil war.

A caricaturized history, spun and repeated ad nauseum by state propaganda and encouraged in the national education system, has become a staple of mainland Chinese media, weighing heavily on Chinese mass sentiment and national identity even seven decades after the war ended, as highlighted by frequent and sometimes destructive anti-Japanese riots.

For example, in 2013, when the Chinese regime and Japan clashed over the disputed Senkaku islands near Okinawa in the East China Sea, a video depicting the nuclear destruction of Tokyo went viral among Chinese netizens.

Exaggerated and at times outright fabricated depictions of heroic and invincible communist troops, facing down both ridiculous and sinister “Japanese devils” are to be found all over Chinese popular culture. Especially in recent years, the “Anti-Japanese War,” as World War II is known locally, has shown itself to be a popular, politically safe theme for film and television producers.

Both ridiculous and sinister “Japanese devils” are to be found all over Chinese popular culture.

In place of genuine scholarship and discourse, mainland Chinese are inculcated with a doctored narrative that ignores or reduces in stature major, Nationalist-led campaigns and battles that set the course of the war. China’s historical contribution to the overall Allied effort reveals a wholly different picture—that of a desperate uphill battle against superior firepower, equipment, and cohesion.

The Truth of a Forgotten War

On July 7, 1937, two years before Nazi Germany’s invasion of Poland, Chinese troops clashed with units of a Japanese overseas garrison south of Beijing, setting off the spark that would ignite eight years of total war across Asia and the Pacific.

Since the 1920s, militarist factions in the Japanese government, protected by imperial authority, had been encroaching on mainland Asia. Korea had been a Japanese colony since 1910, and in 1931, officers of the Imperial Japanese Army occupied and annexed Manchuria, a northern Chinese region containing some 35 million people and bountiful natural resources.

By 1937, Japanese troops had not only occupied Manchuria, but had taken most of what is now Inner Mongolia, extending their zone of control to Beijing (then called Beiping; the capital of China at that time was Nanjing, which lay further to the south). For Chiang Kai-shek, military leader of the National Chinese government, it was clear that further appeasement of the Japanese would only bring further misfortune.

By the end of July, fighting around Beijing had intensified as the Chinese refused to back down in the face of Japanese military demands. Chiang ordered Chinese armies to move in on Shanghai, which contained a sizable Japanese military presence, hoping to draw in large numbers of enemy troops that could be worn down in a decisive engagement.

The Battle of Shanghai claimed over 200,000 Chinese and 70,000 Japanese lives in close-quarters urban combat. It was just the first of over 20 major battles fought by Nationalist Chinese forces, running against the typical communist narrative claiming that their political opponents shied away from fighting in favor of retreat to the Chinese hinterland.

The Battle of Shanghai claimed over 200,000 Chinese and 70,000 Japanese lives in close-quarters urban combat.

Despite valiant Chinese efforts, including one episode in which a German-trained and equipped unit known as the “800 Heroes” held off tens of thousands of Japanese from a fortified warehouse, the Japanese eventually forced the Chinese from Shanghai. With the arrival of reinforcements, the invasion continued from the Yangtze River Delta with frightening speed, threatening the Chinese capital of Nanjing.

The earliest months of the war saw almost no communist activity of meaningful consequence. The one minor victory scored by the communists, the Battle at Pingxingguan Pass, resulted in only a few hundred Japanese casualties—yet has been played up to no end in subsequent state propaganda.

Meanwhile, Nationalist armies continued to fight tooth and nail against the Japanese onslaught, losing hundreds of thousands of men. In Nanjing, where incompetent defense of the capital city led to a rout of the Chinese forces, so many soldiers were taken prisoner and executed by the Japanese that the number of Chinese military casualties is still unclear. Imperial troops further took out their wrath on Nanjing’s civilian population, slaughtering hundreds of thousands of people.

Crushing as the defeats of Shanghai and Nanjing and the associated brutality committed against civilians must have been for Chinese morale, they ultimately had little effect on the Nationalists’ will for continued resistance. In 1938, the largest battle of the war took place at the city of Wuhan in central China, where over a million Nationalist troops held off a hardened Japanese force for over four months.

Even though the overwhelming mobility and killing force of imperial Japan’s armies, extending to hundreds of poison gas attacks, eventually forced the Chinese to retreat from Wuhan, Japanese fatalities, numbering over 100,000, stalled any further advances for many years.

Stabbed in the Back

Ever since the communist seizure of power in 1949, mainland Chinese shows and films depict a widespread and concerted partisan effort taking place in Japanese-occupied territory, always with communist revolutionaries at the forefront.

In reality, Communist Party activity was mostly limited to the gradual infiltration of regions where warfare and the absence of order (Japanese forces were often hard-pressed to exercise actual control over territory they had conquered from the Nationalists) made ideal lairs for the growing political movement.

The Chinese Communist Party does all this to make itself look glorious—but in fact the outcome is ridiculous.
— Xin Haonian, Chinese historian

The Nationalists, under Chiang Kai-shek, were assisted by the United States, but this process was hampered by diplomatic mistrust and disagreement among the key participants, in particular between Chiang and the storied Gen. Joseph Stilwell.

The Chinese communists made full use of the Nationalists’ plight, and never assisted in any meaningful way so as to preserve their own forces; a Soviet diplomat stationed in the communist base area noted at the time that Party Chairman Mao was reluctant to move troops against the Japanese.

While the Communist Party was indeed militarily insignificant at the start of the war, it built up a potent and well-organized army in short order, as reflected in the single major military operation carried out by the communist forces—the Hundred Regiments’ Offensive of 1940. Mao, however, criticized Peng Dehuai, who led the successful campaign, for revealing the strength of the communist troops. During the Cultural Revolution (1966–1976), Mao would use Peng’s “betrayal” as part of the excuse to have him purged.

When Japan finally surrendered in 1945, it was first to the United States, then Chinese Nationalist troops. It would be another four years of brutal struggle in which the CCP forces, now entrenched in northern China and with increasing Soviet support, would overpower the Nationalists, which the United States saw as a lost cause.

Attempting to Silence the Past

The Chinese Communist Party has every reason to distort the story of World War II: the role it performed in the war was little, and giving credit to the Nationalists—who went on to take over the island of Taiwan, which has evolved into its own sophisticated democracy—would undermine its own legitimacy.

So the Party instead hides the actual history, and doing so it robs the Chinese people of the truth of their own history, according to Xin Haonian, a Chinese historian who has written a book about the generals of the Eighth Route Army, part of the communist armed forces. “The Chinese Communist Party does all this to make itself look glorious—but in fact the outcome is ridiculous,” Xin said during a lecture, aired on New Tang Dynasty Television.

But even with its incessant propaganda and control of the education system, many Chinese are increasingly wary about the veracity of the information they receive from state channels about the war. The skepticism includes Cultural Revolution-vintage films such as “Tunnel Warfare” and “Mine Warfare” showing tiny bands of Chinese communist guerrillas mounting over-the-top resistance against Japanese “devils,” as well as the more contemporary depictions of the war—a staple of nightly television—that invite mockery from the intended audiences.

Such unsophisticated tactics do work some of the time, however. And they serve to create a general atmosphere of how the Chinese see the war, and more importantly, China’s “enemies.”

Predictably, among the most primary of these are the Japanese, as evidenced in anti-Japanese riots of recent years, where even Japanese-brand cars have been overturned and set ablaze. In this narrative, China is a perpetual victim. Apologies from Japanese leaders are considered insincere, and the small but vocal far-right wing of that nation is gleefully portrayed as actual Japanese policy.

Mao assured him that it was the ‘help’ of the Japanese invasion that made the communist victory and this visit between communist and Japanese leaders possible.
— Li Zhisui, Mao's personal doctor

The cynicism of the Chinese Communist Party’s portrayal of the war, and the role accorded Japan as Public Enemy No. 1, can be no better expressed than by Mao Zedong himself.

According to Mao’s doctor, “Mao assured him that it was the ‘help’ of the Japanese invasion that made the communist victory and this visit between communist and Japanese leaders possible.”

Given all this “help,” Japan’s offer of reparations was turned down.