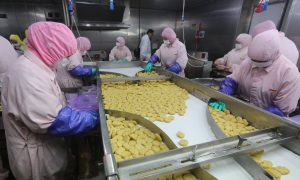 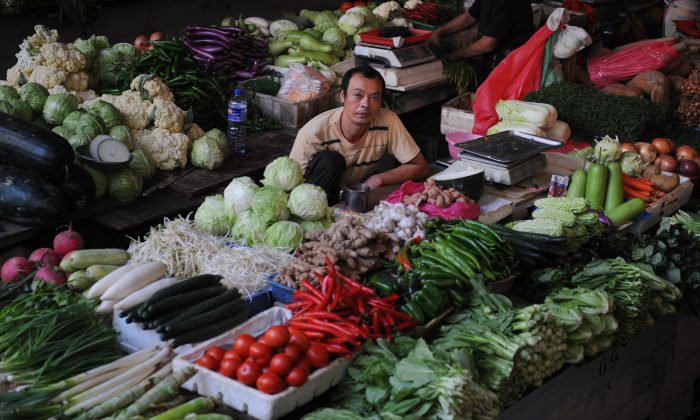 In over a decade of unnerving food scandals, the Chinese people have seen almost every form of poisonous or fake product, from rice contaminated with cadmium to restaurant dishes drenched in sewer oil to salmonella-tainted tilapia fish.

An annual China Youth Daily survey in March found that out of various “quality of life” issues, the public worried most about food safety. From a list of problems like housing or the environment, 77.3 percent of the respondents identified food safety as their greatest concern.

So who is to blame for this burgeoning affliction plaguing Chinese society?

The obvious answer would be the unethical farmers, manufacturers, and food processors looking for a quick profit. But the crux of the problem goes much deeper. Over the past sixty years, the Chinese Communist Party (CCP) has tyrannized the Chinese people and warped traditional values, replacing ethics with corruption, deceit, and self-serving materialism. With its disastrous policies, the CCP created a breeding ground for immoral commercial practices and lax food safety standards.

The communists took over China based on an ideology of class struggle and violent revolution to establish a “dictatorship of the proletariat.” Traditional Confucian thought promoted moral values like benevolence, righteousness, propriety, faithfulness, and harmony, but the CCP obliterated these ideas with fiery, revolutionary rhetoric.

After the Chinese were terrorized into submission by decades of struggle against landowners, capitalists, rightists, intellectuals, and any other “black elements,” people lost a sense of community and resorted to any unethical means to ensure their own survival. Some even betrayed their families and friends, designating them as “class enemies” to be struggled against. No one dared to speak the truth for fear of being publicly humiliated, tortured, or killed.

The effects of the Chinese regime’s eradication of traditional moral values trickled down to modern day, making food producers and manufacturers focus solely on material profits and individual prosperity, not the ultimate social consequences. For many Chinese, the mentality is a self-serving, Darwinist fight for success.

2. The CCP promoted rapid industrialization with little regard for environmental sustainability

With his massive propaganda apparatus, Mao Zedong, dictator of China from 1949 to 1976, promoted atheism and materialism. He once said, “battling with heaven is endless joy, fighting with the earth is endless joy, and struggling with humanity is endless joy.” This and the Chinese regime’s hopes to rapidly transform China into an industrial superpower justified wasteful and unregulated industrialization that destroyed China’s environment, making the production of uncontaminated agricultural products almost impossible. Now, China’s air, water, and soil are all contaminated with industrial fumes and dangerous chemicals.

Government data from 2011 showed over half of China’s major lakes and reservoirs were too contaminated for human use. And nearly one-fifth of China’s farmland is polluted, according to China’s Ministry of Environmental Protection and Ministry of Land Resources, with agricultural chemicals and heavy metals like cadmium and arsenic.

Some compare China’s industrial growth with that of the United States in the late 19th century. But no Upton Sinclair novel or Pure Food and Drug Act will magically uplift China from its current downward spiral. China’s problem extends far deeper, involving a thick web of corrupt and materialistic businessmen and communist authorities who care only about immediate profits, not the long term consequences. They waste billions of dollars on large-scale projects, like the South-to-North Water Transfer Project, or even the Three Gorges Dam, which often cause damage to the environment while offering no significant benefits to the Chinese people.

3. The CCP puts a heavy financial burden on the common people

Trumpeting land for the peasants and utopian equality for all, the communists bewitched the minds of millions when they first came to power. After murdering hundreds of thousands, or perhaps millions, of landlords in a nationwide land reform program, they redistributed the land and created cooperatives and people’s communes. The CCP urged peasants to rapidly increase production, and then confiscated most of their produce, leaving them with meager earnings. A residential registration system then blocked them from moving to cities or giving their children a proper education, demoting peasants to second-class citizens.

Although economic reforms in 1978 opened the economy to trade and private ownership, the changes did not proportionately improve living standards for all the Chinese people; those with connections to power reaped far more wealth, while the common folk experienced only minor improvements.

By purposefully depreciating the value of the renminbi, China’s currency, the Chinese regime made Chinese exports more competitive in overseas markets, as demand for Chinese products increased with cheaper prices. From a ratio of 1.8 yuan to 1 dollar in 1978, the Chinese regime depreciated the value to a ratio of 8.7 yuan to 1 dollar by 1997, according to Brookings, an American think tank based in Washington D.C. Trade increases allowed China’s economy to rapidly expand, but the practice sapped the wages of the industrial workers and peasants in China by lowering their purchasing power.

As a result, income equality, measured by the Gini coefficient for pre-tax market income, grew from 0.28 in 1980 to 0.52 by 2013. Due to greater income growth for the rich and stagnant living standards for the poor, China is now “one of the most unequal countries in the world,” according to a working paper by the International Monetary Fund.

With China’s severe economic disparity, some people resorted to unethical means of food production to make a greater profit.

Some think China’s economic and social situation improved in recent decades after the passing of Mao Zedong and the end of the revolutionary movements of his time. That is true in some ways, but in other ways, other problems sprung up.

When Jiang Zemin came to power in 1989, becoming the General Secretary of the CCP, he exacerbated the problems, promoting his relatives to high-ranking posts and controlling state-run media to conceal their corruption and crimes. He himself gained power through dubious means, pandering to higher-level officials to quickly climb the political ladder. Even after he finished his term and Hu Jintao took power in 2002, he still controlled the operations from behind the scenes, putting his supporters in key positions.

Corruption, embezzlement, bribery, and other unlawful conduct are now rampant in China and reach all sectors of society from the local security officers to the justice system to the wealthy businessmen. Bribes are given freely, and food safety regulators allow violations to fester with the excuse that China is simply too vast and their resources too limited. When a food producer’s wrongdoings are revealed, he pays off the authorities and the media to cover it up.

A survey released by the Pew Research Center in 2014 found China ranked highest in people who believed bribes would get them ahead in life. And an October 2011 survey of over 20,000 people across China found nearly half the respondents did not think strong ethics was a necessary condition for success in Chinese society.

So it’s no wonder why farmers add alarming amounts of pesticides and fertilizers, why meat producers mix rotten meat with fresh meat, and why manufacturers falsely label conventional foods as organic.

5. CCP officials have their own private, safe farms

While the Chinese people suffer in a society of toxic food products, communist party officials have private farms producing food for them. As long as they are not consuming poisonous foods, they have little motivation to deal with the problem.

As early as Mao Zedong’s time, the Chinese regime had already created special production centers to create healthy food products for high-ranking officials, according to Radio Free Asia, a broadcaster based in the United States. The practice grew, and now not only do the top Beijing officials have their own produce, any official with the power to do so has secretly constructed private farms for himself.

The Chinese regime knows China has a food safety problem, but officials care only for their own well-being, ignoring the health of the common folk. And when scandals do break out nationwide, they attempt to placate the people with an occasional declaration of tougher regulations.

6. The CCP only cares about an appearance of prosperity in China

In the past decade, the CCP has shown that it only cares for an appearance of a prosperous economy, recklessly boosting the housing market and, recently, encouraging naive Chinese people to invest in the unpredictable stock market.

A thorough investigation of all food violations would be immensely costly and time-consuming and would lead to massive shutdowns and recalls across China, a move damaging to China’s economy.

In many cases, they deal with the problem by simply covering it up. In 2008, a scandal erupted when milk powder from Shijiazhuang-based Sanlu Group was found to contain melamine, added to artificially increase protein levels. The formula sickened 300,000 infants, and killed at least 6 with kidney stones.

But the tragedy was avoidable. Before the scandal broke out nationwide, He Feng, a journalist for Guangdong’s Southern Weekend newspaper, had begun investigating the milk powder after hearing reports of infants falling ill. The report, however, was suppressed by authorities and never published because of the upcoming Beijing Olympics. Chinese media had been instructed to only do “positive reporting” and avoid any upsetting news. A website created by affected parents to call attention to the problem was blocked, and some parents who tried to hold a news conference were detained by police officers.

But the news spread quickly and reached the front pages of international media, leading to a crisis of confidence with Chinese dairy products domestically and abroad. Chinese authorities, realizing the issue could not be contained, cracked down on the criminals, executing some, sentencing others to lengthy jail terms, and firing and suspending the government officials in charge. (Though some later were brought back into power.)

Recently, the Chinese regime amended a 2009 food safety law, adding fifty new articles setting tougher penalties for violations, effective Oct. 1, 2015. But with the deep-rooted issues in China’s food production chain, it’s unclear whether the changes will have any effect.