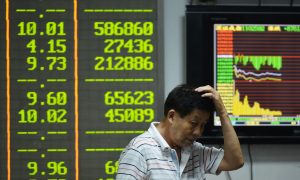 Of course, stock markets worldwide were overvalued for quite some time and speculators were using margin debt to buy shares. So is this long overdue correction surprising? Hardly. What is interesting is that the trigger for the change in sentiment was China.

Over the last year, the country has experienced the popping of a real estate bubble, a fierce economic slowdown, a stock market crash, and a surprise devaluation of the currency. Actually given this kind of record, it is surprising global markets haven’t reacted until recently, once China moved into correction territory (down more than 10 percent from its highs) during the week ending Aug. 21.

Maybe people believed China, because of its closed financial system, wouldn’t export internal volatility. Of course, there are other reasons for the sell-off in Western equity markets (possible Fed rate hike, extreme valuation levels, margin speculation, and growth slowdown) but it’s worth taking a closer look at the connection to the world’s second largest economy. It may just be as contained as subprime was during the heydays of the last financial crisis.

For stocks to go higher, the world needs economic growth and companies need earnings growth. And even though China has actually taken growth from other countries by running a trade surplus for decades, it also bought up more than half of the world’s iron ore and cement every year for the same period to use it in more than questionable investment projects.

This has benefited raw material exporters such as Australia, much of South America, as well as Canada and even the United States (soybeans!). Using as much as 10 percent of the world’s oil was also a boon to Middle Eastern oil producers.

This party is definitely over as the Bloomberg commodity index has just crashed to levels not seen since 1999. Raw material is a capital intensive business, so this hurts everybody who kept on investing in expansion projects banking on Chinese growth. Just take the global mining industry, which invested $400 billion on expansion projects since 2009. Ironically, a lot of that expansion was undertaken by Chinese companies because they thought prices would only go higher.

So no more growth for a few key industries globally for the next few years and possibly some nasty losses from bad investment in (over)capacity. No wonder those industries’ stocks are getting hit hard and other companies are feeling the ripple effect.

Yes, it is true, China has quite a closed off capital account and problems within its financial system should have a limited impact on world markets. In theory.

However, in practice, the People’s Bank of China (PBOC) still has $3.7 trillion in foreign exchange reserves—it sold more than $317 billion over the last 12 months to satisfy private dollar demand and possibly another $100 billion in the two weeks since the devaluation on Aug. 11.

Given its sheer size, any action the PBOC takes has market impact and recently, it has been a seller. We can see some of this now, with both Treasury bond prices as well as U.S. stock prices declining.

In addition, China has around $500 billion worth of trade obligations outstanding, used by companies to borrow dollars in order to buy raw materials on world markets.

Much of this trade financing is collateralized by precisely the raw materials that have been in free fall (copper, steel), leading to losses for the importer.

Losses in commodities force investors to sell profitable positions (equities!) in order to meet margin calls and the selling spreads.

Reserves Could Run Out Quickly

One word on China’s foreign reserves here. Yes, they can be sold to abate the liquidity squeeze and some already have been. However, most of these investments are very illiquid. As the Heritage Foundation points out, China has poured more than $1 trillion into illiquid foreign investments, mostly into mining and energy.

Yes, the country still has a chunk of liquid investments left, such as U.S. Treasurys ($1.3 trillion), but Jeff Snider warns those reserves can run out faster than one can say bank-run.

“The outflows have been tremendous. There is no guarantee that this will remain stable, and if conditions worsen, it could grow exponentially into a run,” he said.