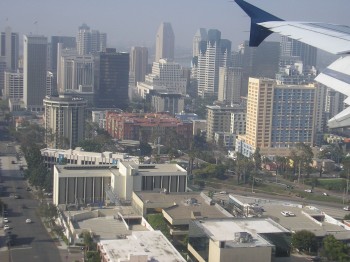 Gisela Sommer
View profile
Follow
biggersmaller
Print
A massive power outage that started at around 3:30 p.m. on Thursday, Sept. 8 in Arizona, shut down the electricity grid in large parts of southern California, Arizona and northern Mexico, all the way up to Orange county, affecting 1.4 million customers in San Diego county. About 5 million people lost power in the region. Employee error and high heat were to blame, according to officials.

San Diego was hit the hardest. Several people got stuck in elevators in high-rise buildings downtown and elsewhere, with service personnel prying elevator doors open with crowbars to get air to the trapped people, KOGO Clearchannel radio station reported.

With no air-conditioning, lights or computers functioning, everyone left work at the same time, creating huge traffic congestion all over the county. Gas stations were shut off too. People were told to conserve gas and not use their cell phones or landline phones except in extreme emergencies. San Diego Gas & Electric (SDGE), was unavailable for comment.

In San Diego, the Highway Patrol said there were several collisions at intersections because street lights were also out and people didn’t stop before proceeding. Roadside assistance trucks were not responding because they were saving their own gas.

Some electric trolleys got stuck on roads, some on overpasses, with passengers trapped inside.

Crossing the border from Tijuana, Mexico into the U.S. took three hours.

At San Diego’s International Lindbergh Field airport all outgoing flights were canceled at 5:30 pm, and some incoming ones were diverted.

Stores were out of ice and closing down.

About three million people in San Diego County without electricity; nothing like this has ever happened, according to KOGO.

Shortly before 10 pm an announcement was made that some areas had gotten their power back. Cox Communication said their workers would be going to work as usual on Friday to restore hi-speed internet access.

San Diego Gas & Electric Co announced Friday that the event was purely an employee error and that the system was coming back online, with most power expected to be restored during the day Friday. President Mike Niggli asked at a late night press conference that people conserve energy and turn off their air conditioners to prevent surge damage when the power comes on.

All public schools throughout the county will stay closed on Friday, and people were asked to stay off roads. Some outbound flights were still canceled as of Friday morning.