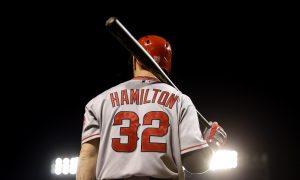 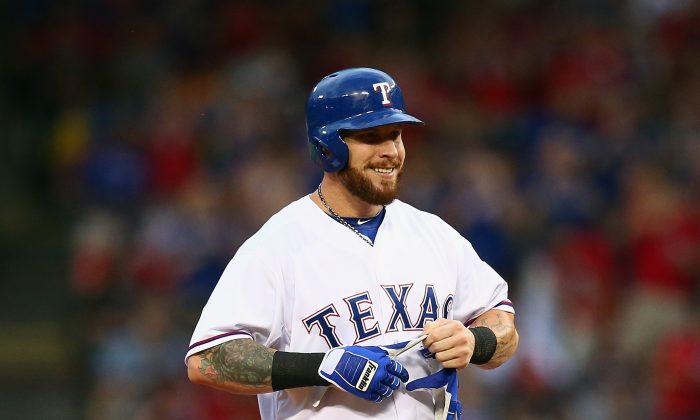 Josh Hamilton already has two home runs and a game-winning double in seven games for the Texas Rangers while being paid by the Los Angeles Angels. (Ronald Martinez/Getty Images)
Baseball

What’s worse than going overboard in free agency and committing $125 million to a player who doesn’t produce? Apparently, it’s to compound the issue by convincing another team to take him on in a trade—which requires you to pay the majority of his remaining contract—and then watching him flourish for his new team—your division rival.

It’s only been seven games for Josh Hamilton with the Rangers, but already the Angels look like they’ve found a way to lose on the Hamilton deal again.

First they gave him a mammoth, back-loaded contract after the 2012 season that he failed to live up to, and then they traded him after two unproductive seasons and an offseason admission to having a drug relapse.

Now Hamilton, just seven games into his second stint with Texas, already has two home runs and a game-winning double while putting up a slugging percentage of .636.

Of course it’s early, but Hamilton, who was previously out of baseball for nearly three years due to drug and alcohol problems, already looks better and more comfortable than he did under the huge contract that weighed him down in Los Angeles.

Should it continue to work out, it won’t be the first time a team gives up on a player who goes on to thrive in a new setting.

Longtime New York Met Darryl Strawberry had similar off-the-field issues to Hamilton’s. When the popular right-fielder signed a five-year $20.3 million contract after the 1990 season to go to Los Angeles and play for the Dodgers, he was at the height of his career—although he didn’t know it at the time.

But the former first overall pick of the 1980 draft had just one good season (1991) before injuries and off-the-field problems derailed his career. The Dodgers released him just three years into his deal, with the final straw being a missed exhibition game where the team didn’t locate him until the next day. After a one-year stint in San Francisco in 1994 the ended with a drug suspension, Strawberry signed with the Yankees the following summer.

Over parts of five seasons in New York, Strawberry helped the team to three World Series titles while playing 231 regular season games and putting up a .502 slugging percentage in pinstripes.

His best season came in 1998 when he hit 24 home runs in 101 games. Meanwhile, the Yankees paid him less than a million dollars each season—a bargain price even 20 years ago.

So, while the Dodgers also got little return on their investment, at least Strawberry didn’t star for their rival Giants.