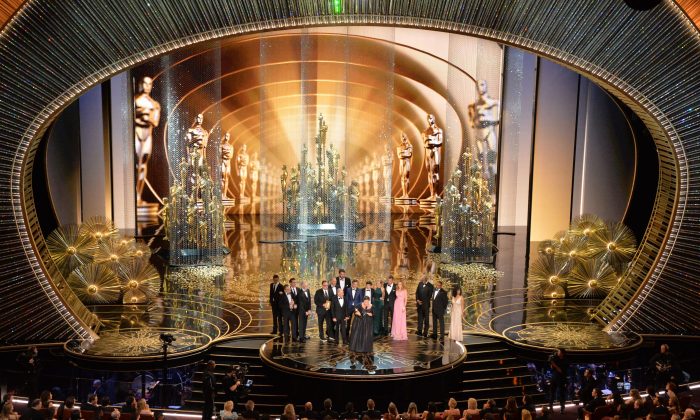 Members of the cast and producers of Spotlight accept the award for Best Picture at the 88th Oscars on February 28, 2016 in Hollywood, California. (MARK RALSTON/AFP/Getty Images)
Entertainment

The 2016 Oscars and social change

Even before the 88th annual Academy Awards aired Feb. 28, it was set against a background of social change. Controversy had been buzzing (#OscarSoWhite) and boycotts were on after it was revealed that no black actors were nominated for awards—for the second year in a row.

But racism wasn’t the only social issue highlighted at the awards ceremony. The event also saw some of the winning films opening the way to real-world change. Or, as in the case of Chris Rock and Leonardo DiCaprio, calling for change.

Prospect of Change in Pakistan

Filmmaker Sharmeen Obaid-Chinoy was the sole Canadian to claim an Academy Award this year, for her short documentary on honour killings in Pakistan: “A Girl in the River: The Price of Forgiveness.” But what has her most proud is that it’s creating real hope for Pakistani women and girls.

Obaid-Chinoy says she’s heartened by reports that two people in Pakistan were sentenced Feb. 29 for an honour killing, an indication there might be a crackdown on the brutal tradition.

“For me, the biggest win is the fact that the issue I’m trying to highlight has gotten such a tremendous response, and it will continue to,” Obaid-Chinoy said from Los Angeles.

“This morning in Pakistan they sentenced two people … for an honour killing, so it’s already having some sort of reverberations. What more can a filmmaker ask for?”

It’s already having some sort of reverberations. What more can a filmmaker ask for?
— Filmmaker Sharmeen Obaid-Chinoy

She’s also drawn attention from world leaders, with Prime Minister Justin Trudeau tweeting his congratulations and Pakistan’s Prime Minister Muhammad Nawaz Sharif declaring in a statement that “there is no place for killing in the name of honour in Islam.”

The Vatican newspaper praised Oscar-winning film “Spotlight” as having given voice to the “profound pain” of the faithful over the reality of clerical sex abuse.

L’Osservatore Romano dedicated two articles to the Academy Awards and the Best Picture won by “Spotlight,” about the Boston Globe’s 2002 expose of the hundreds of Boston children who were molested by Catholic priests and the church’s systematic coverup of the crimes.

Vatican Radio, which gave the film an enthusiastically positive review in October when it screened at the Venice Film Festival, also praised “Spotlight” in its Oscar wrap as a “rigorous and authentic” reconstruction.

The reaction marks a dramatic turnabout by the Vatican from a decade ago and even as recently as 2010, when the last convulsion of the long-running scandal flared as thousands of new victims came forward in Europe, Latin America, and beyond. Then, the Vatican paper of record was a vehicle for ringing defences of how the Holy See had responded and criticism for the “unjust attacks” being hurled against its pope.

Singer Lady Gaga also used her Oscars performance to call attention to sexual assault on university campuses with her song “Til It Happens To You.”

The emotional performance, which saw many audience members brought to tears, ended with dozens of survivors of sexual assault joining her on stage, earning a sustained standing ovation from the crowd.

We want the black actors to get the same opportunities as white actors. That’s it.
— Comedian Chris Rock

Throughout the ceremony host Chris Rock addressed the race controversy head-on, calling out the Academy and film industry for overlooking black talent.

“It’s not about boycotting anything, we want opportunity. We want the black actors to get the same opportunities as white actors. That’s it,” he said in his opening monologue.

Alejandro G. Inarritu also had an important point to make about inclusiveness during his acceptance speech for best director for the survival epic “The Revenant.”

As one of the handful of Mexican filmmakers to find great success in Hollywood, Iñárritu said he was “very lucky to be here tonight,” while acknowledging that “unfortunately, many others haven’t had the same luck.” In closing, he urged society to “liberate ourselves from all prejudice”—and to make sure the “colour of our skin becomes as irrelevant as the length of our hair.”

Meanwhile, “The Revenant” lead actor Leonardo DiCaprio, who nabbed his long-awaited first Oscar for the role, used his acceptance speech to talk about climate change.

Hungarian-born director László Nemes’ comes from a family that lost relatives in the Holocaust. The director has said he felt the visceral nature of “Son of Saul” was necessary in an age when many people, especially younger generations, see the Holocaust as something from the distant past.

“Even in the darkest hours of mankind, there might be a voice within us that allows us to remain human,” Nemes said on stage. “That’s the hope of this film.”

With files from the Associated Press