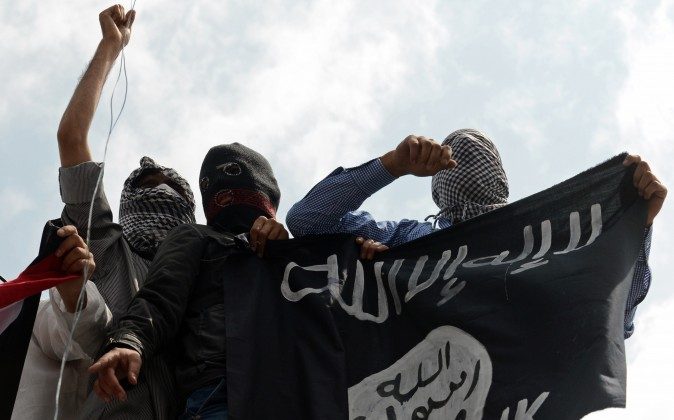 Kashmiri demonstrators hold up a flag of the Islamic State of Iraq and the Levant (ISIL) during a demonstration in India against Israeli military operations in Gaza, in downtown Srinagar, on July 18, 2014. (Tauseef Mustafa/AFP/Getty Images)
Opinion

On an overcast afternoon in London in May 2013, an off-duty soldier named Lee Rigby was murdered near his barracks in Woolwich, southeast London. Rigby’s killers were two young British men of Nigerian descent, Michael Adebolajo and Michael Adebowale. What people didn’t know at the time is that six months earlier Adebowale had talked on Facebook about his desire to slaughter a soldier.

The authors of the official report into the killing chastised Facebook for not picking up on the threat, arguing there was a “significant possibility” that the attack could have been prevented if the technology company had alerted the authorities. Politicians turned on social networks for not doing enough to stop extremists, accusing Facebook and the like of providing a safe haven for terrorists and of not living up to their social responsibility.

It’s too easy to use social networks as scapegoats, especially when it distracts attention from the failings of the security services – who had previously had Adebolajo under surveillance. Extremists have always used whatever technology they could to get their message out, from printed propaganda to broadcasting over the airwaves. The smartphone is today’s printing press, and social media a ready-made distribution network.

So it’s hardly surprising that according to some estimates 90% of terrorist activity on the internet takes place on social media sites. The real issue is about power: social media shifts the balance of power away from governments, police and the armed forces in favour of loosely organised groups of activists, dissidents and extremists too.

Social media inherently favours guerrilla warfare, where a small, nimble force can successfully take on a larger, more unwieldy one. To understand how to combat extremism on the internet, we need to understand why this is.

Social media is generally free, open to anyone who can get online, and messages can be more visible than ever before, with a global reach. Instead of relying on the press or other intermediaries, extremist groups reach people directly and tailor the message accordingly. The Islamic State (IS) skillfully targets messages designed to spread terror among Western audiences while recruiting followers with tweets aimed at the Muslim world.

Since social media operates as a network, it is much easier to spread hate from one person to another – each follower becomes a broadcaster – and the cost to reach 100, 1,000 or 10,000 people is essentially the same.

This distributed and decentralised model favours guerrilla tactics. Groups and individuals can operate independently, yet loosely connected. By contrast, messages from institutions tend to operate on a command and control structure, whose layers of bureaucracy make it hard to respond quickly.

It is much harder to shut down the propaganda channels of extremist groups when no one, and everyone, is in charge. Security comes through obscurity. Unofficial Twitter or Facebook accounts run by sympathisers are hard to track down as they can blend into the volume of stuff on social media. One study from earlier this year found 27,000 Twitter accounts that were positive about IS, yet none were officially run by the group. Instead, these people become what in the business world are called “brand ambassadors”. In effect, extremists spreading hate are using the same tactics used by Hollywood studios to get fans buzzing about an upcoming film.

Twitter encourages us to live in the moment, to react rather than reflect. When news breaks, Twitter comes alive with a jumble of facts, speculation, rumour and emotion. The uncertainty that follows something like the Ottawa shooting provides fertile ground for an atmosphere of fear.

The real-time nature of social media offers a tactical propaganda advantage to terror groups. They can try to seize the news agenda by sending immediate reports and photos from the scene of an attack, before the media or the authorities even have time to evaluate what has happened.

The irony is how much of this activity happens in public, on networks that can be monitored by the security forces. As businesses have discovered, people are freely providing a wealth of information about their actions, intentions and beliefs on social media. Smart companies have learned to monitor in real time and respond rapidly to a consumer backlash on social media. There is a lesson here for the fight against terror.

Traditional, hierarchical institutions are slow moving beasts that are ill equipped to fight in a propaganda battleground that favours the guerrilla tactics of the nimble.

The same qualities of social media that can help people to come together and protest about income inequality or contribute to the overthrow of a dictator can also be harnessed for evil. At the core of the debate is the fact that social media is a contested space, where the power of institutions and elites can be challenged and neutralised by those on the edges – for good or evil.