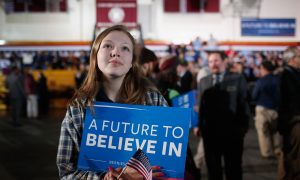 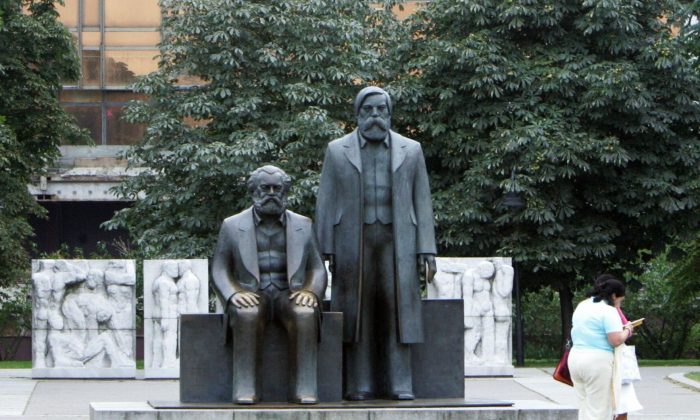 A statue of Karl Marx and Friedrich Engels, the main architects of communism, in front of the Palace of the Republic in Berlin, Germany. (John MacDougall/AFP/Getty Images)
Viewpoints

How Socialism Is Ravaging Our Society

Each year, society is progressively growing darker as morality is being eroded. Seeing nationally funded CBC parade onstage little boys, 10 and 12 years old, dressed in drag and performing stripper-like acts, is an indication that something is drastically wrong. Recently, we have seen euthanasia, marijuana, and sex clubs legalized. Marriage has been redefined and the family unit is under attack, with the use of words such as “mother” and “father” being discouraged.

Our educational system has abandoned truth and replaced it with relativism, the idea that absolute truth is not to be pursued. Institutions have thrown science, biology, and chemistry to the wind in favour of gender fluidity theory, which allows one to change one’s gender on a whim. Individualism has been replaced by statism. Religion is now ridiculed as the opiate of society.

It gets worse. Appointed, un-elected judges are making social policy laws contrary to historical truth and traditional values. If anyone dares to exercise free speech it is seen as an offence to society and they are often mocked, shouted down, or even attacked. Belief in God is derided in the halls of higher learning.

How did this happen? Some believe it is the natural progression of society; however, there is no empirical or historical evidence to support such a claim. The answer is clear: The likes of Fredrick Nietzsche, Karl Marx, Fredrick Engels, Charles Darwin, Sigmund Freud, and Michael Foucault began a socialist revolution that is transforming out society’s cultural foundations. Vast sectors of society are now dominated almost exclusively by their philosophy, including academia, media, bureaucracy, and the judiciary.

British economist John Maynard Keynes frequently cited Vladimir Lenin’s declaration that “there is no subtler, no surer means of overturning the existing basis of society than to debauch the currency. The process engages all the hidden forces of economic law on the side of destruction, and does it in a manner which not one man in a million is able to diagnose.” This same principle is at work today, not economically but rather socially. As socialists engage the hidden forces of moral relativism, they are destroying the fabric of our society—and not one in a million recognizes this.

Marx taught that socialism is a transitional, social state between the overthrow of capitalism and the realization of communism. Billy Graham warned us about this cultural shift in 1954 when he stated that communism “is here to stay. It is a battle to the death: either communism must die, or Christianity must die. … Politically, a communist is one who believes the state is supreme and the individual exists only for the welfare of the state, thus destroying the God-given status of the dignity of the individual.”

Socialist philosophers have cleverly cloaked their tenets as natural thought supported by science. Fredrick Nietzsche is considered to be the Moses of socialism. He declared that God is dead, therefore there is no need to worry about the consequences of your actions. There is no judgement, hell, or eternal punishment for behaving immorally, so you may do as you wish, follow your instincts, enjoy what you can, and then take your life when pleasure runs out. He also argued that there is no reward for good behaviour, therefore you can heap unto yourself pleasures and excesses with no regard for others. Nihilistic thought holds that Adolf Hitler and Mother Teresa receive the same end. Such thinking is attractive to those who desire to follow their proclivities rather than temper their actions to a moral code. In other words, do as you please, live and let live, eat, drink and be merry, for tomorrow you die.

The outcome of this revolution is becoming catastrophic. Suicide rates are skyrocketing in Canada, with 200 people attempting suicide every day. In 2015, Statistics Canada reported that over 10 percent of our population, roughly 3,396,000 people over the age of 12, contemplated taking their own life. Suicide among youth and young adults is particularly worrisome, being the second leading cause of death, while being the ninth leading cause of death overall.

Other outcomes include depression, substance abuse, sexual assault, and school shootings. In Canada, one out of three women are sexually assaulted in their life time, according to the federal government. A tragic 15 percent will become clinically depressed and 10 percent are known to consume opioids and psychotropic drugs. Mass murder by those emulating the meaningless life ramblings of the Columbine shooters has become a common occurrence. Racial divides are deepening due to Darwin’s teaching of “favoured races” from “On the Origin of Species by Means of Natural Selection, or the Preservation of Favoured Races in the Struggle for Life” which has become the foundation of thought among most of society.

Remarkably, freedom of expression, critical thinking, reason, rationality, and objective truth have become enemies of the state. Post-modernism has now labelled such thought as misogyny, bigotry, racist, and hateful as an attempt to silence opposition. If you quote statistics, you will be condemned. If you aim for reasonable thought, you will be attacked. Critically presenting empirical data with the intent of arriving at truth is not permitted. Everything must be subjective and fit the socialist narrative. Radical progressives cannot argue the merits of meaninglessness or the benefits of amorality so they resort to the classic schoolyard bullying tactic: name-calling.

The past 100 years were the bloodiest in human history, with nearly 200 million people slaughtered in war. Almost all these wars were driven by leaders proclaiming socialist philosophy. Vladimir Lenin, Joseph Stalin, Adolf Hitler, Mao Zedong, and Pol Pot all trumpeted the absence of a creator, evolution, opposition to religious morality, and the randomness of life. The result was mass death and human suffering—the logical outcome of immorality and meaninglessness.

War is not the chief mechanism of this century’s socialism. It has shifted to a much deeper level and is on track to result in equally devastating consequences. Philosopher Max Horkheimer stated that “the Revolution won’t happen with guns, rather it will happen incrementally, year by year, generation by generation. We will gradually infiltrate their educational institutions and their political offices, transforming them slowly into Marxist entities as we move towards universal egalitarianism.”

There is a battle raging for the soul of our society. It is not a battle of flesh and blood but a struggle between freedom and socialism.  Make no mistake, the socialists now have the upper hand and are ready to move in for the kill: full-scale socialism.

Dr. Charles McVety is the president of Canada Christian College and School of Graduate Theological Studies in Whitby, Ontario.

If you’ve enjoyed reading this article, consider subscribing to The Epoch Times—North America’s fastest-growing independent newspaper, dedicated to pursuing Truth and Tradition on a daily basis.

The Epoch Times stands outside political interests and the pursuit of profit, to educate readers about today’s most critical issues with the intention of broadening minds and uplifting society.

We stand against the systematic destruction of traditional culture by destructive ideologies such as communism, which continue to harm societies around the world.

Take advantage of a one-month trial offer to enjoy the paper for only $1.

For Canadian readers, details of the special offer and other subscription details can be found here.

For American readers, details can be found here.