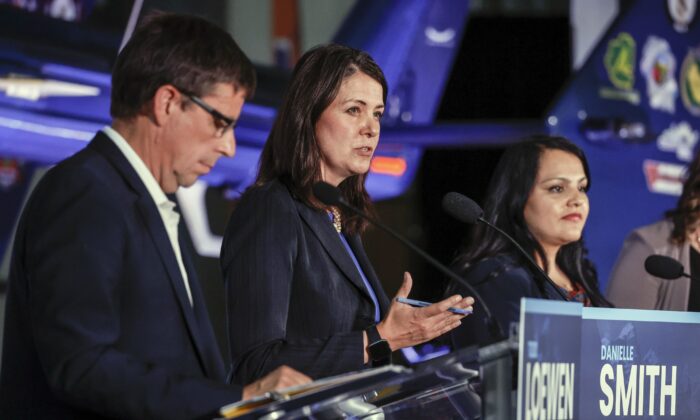 Alberta’s United Conservative Party (UCP) leadership candidate Danielle Smith says her proposed Sovereignty Act would give Alberta the same powers that Quebec has within the Confederation.

Releasing more details about her plan on her website this week, Smith said the proposed law “would affirm the authority of the Provincial Legislature to refuse provincial enforcement of specific Federal laws or policies that violate the jurisdictional rights of Alberta under Sections 92–95 of the Constitution or that breaches the Charter Rights of Albertans.”

In an op-ed in the National Post on Aug. 22, Smith wrote that implementing the act would “put Ottawa on notice” that Alberta wouldn’t enforce laws that “violate the sovereign powers granted to us” under those sections of the Constitution.

And there are already precedents, she argues in the op-ed, including Quebec passing a motion that the Emergencies Act invoked by the feds in February to deal with the trucker convoy protests shouldn’t apply in Quebec; B.C. getting an exemption from federal law to decriminalize possession of small amounts of hard drugs; and Saskatchewan Premier Scott Moe saying his province won’t enforce Ottawa’s fertilizer reduction regulations.

Depending on who you ask, opinions differ on the feasibility of Smith’s proposed act, whether it should have gone further, and where it sits within the constitutional framework of the Confederation.

Lawyer and Sovereignty Act co-author Derek From says the act fits within the larger theme of the Free Alberta Strategy, which was inspired by Quebec. Smith’s proposed legislation attempts to get the federal government to live within the clear bounds of the Constitution, he told The Epoch Times.

“We’re rolling the clock back and we’re going back to what the Constitution meant before it was undermined by a combination of the federal government and some court decisions that were quite clearly, I think, contrary to the interests of Albertans,” From said.

Saskatchewan Premier Moe began conversations about becoming a “nation within a nation” last November. He said he wants more autonomy in policing and taxation. He also envies Quebec’s deals with the federal government on immigration and child care.

Quebec collects its own taxes, has its own police force, has some autonomy over its immigration levels, and has its own language laws.

Michael Binnion, CEO of the oil and gas advocacy group Modern Miracle Network, said Quebec built institutions to manage themselves after following the process outlined in the Clarity Act, which says provinces that don’t want to follow federal laws should have a referendum on separation.

The Clarity Act established the conditions under which the federal government would enter into negotiations that might lead to secession following such a vote by one of the provinces. Quebec has held two referendums on separation, in 1980 and 1995, but both were defeated.

“They put themselves in a position to govern themselves, and then they said, ‘We want to have autonomy and we’re going to follow the legal process’ which is to have a referendum,” Binnion said.

In contrast, the Sovereignty Act would create a law that states the province doesn’t have to follow federal law or court orders, he argued.

Smith says that under her proposed legislation, the government of Alberta would be able to introduce a special motion to refuse or oppose the enforcement of a specified federal law or policy deemed to be in violation of the Constitution or the charter. She says the special motion would be put forth to all MLAs for a free vote.

Smith has said she would use the Sovereignty Act to stop Bill C-69—which overhauls the regulatory approval process for major energy projects—as well as vaccine mandates, restrictions on fertilizer use, and gun-control legislation.

University of Toronto political science professor emeritus Nelson Wiseman says Quebec accomplished a level of autonomy through its legislature but Alberta and Saskatchewan have talked and “done nothing.” The only thing the three provinces have in common is antagonism or skepticism toward the federal government, he said.

Wiseman adds that the proposed act is just “public relations” because Smith knows the Alberta public is “anti-Trudeau, anti-Liberal, and anti-federal government.”

“It’s to get people talking, it’s to get the attention of the federal government,” he said.

Critics of the Sovereignty Act, including outgoing Alberta Premier Jason Kenney and Smith’s rivals in the leadership contest, have said the proposed act would go against the law.

“The proposal is for Alberta basically to ignore and violate the Constitution in a way that is unprecedented in Canadian history,” Kenney said on his radio show in August. “The province should be focused on realistic, practical ways to fight unfair Ottawa policies.”

From says the Sovereignty Act maintains the rule of law. And while inspired by Quebec, the act differs from Quebec, which sought to unilaterally make changes to the Constitution, he said, pointing to Bill 96 as an example.

Introduced by Quebec Premier François Legault last year and passed into law in June 2022, Bill 96 sets out sweeping language law reform that includes adding two new subsections to Section 90 of the Constitution proclaiming Quebec a “nation” and to “affirm that the only official language of Quebec is French.”

Smith says she would draft the legislation in consultation with cabinet and caucus and in “accordance with sound constitutional language and principles.”

Dennis Modry, president of the Alberta Prosperity Project, which advocates for Alberta independence, says the Sovereignty Act’s fatal flaw is a failure to leverage separation. Ottawa will fight back by withholding transfer payments, and the easiest way to achieve leverage is by holding a referendum on separation, he said.

“What about giving the provincial government the leverage that they need to negotiate from a position of strength?” he said. “That leverage comes from a successful referendum on independence.”

Kenney has said that “the whole notion of separation is irrational” and that this position not only comes from his loyalty to Canada in his heart but also the fact that Alberta is landlocked.

Smith has said she’s not advocating for separation.

“In my view, the restoration and reassertion of provincial rights across our country will protect all provinces from the destructive overreach of Ottawa, and is likely the only viable way for Canada to remain a unified nation long into the future,” she said.

UCP members will elect a new leader and premier on Oct. 6.