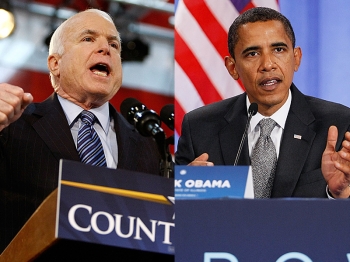 Musings and Expectations of the 2008 U.S. Presidential Election

In less than three weeks, a new U.S. President will be elected. The polls show that McCain is still behind Obama. I however, do not generally believe in the polls. I had an interesting conversation with an American colleague of mine several days ago regarding this matter.

The Polls Are Unreliable

The colleague told me on the day of an election that supporters of each candidate will gather not far away from the polling booths to campaign for more votes at the last minute. Those who don’t really care who they vote for, sometimes vote for a certain candidate based on their impression of his or her supporters.

Many people do not vote based on the issues. Some people even change their minds the last minute when standing in front of the voting machine, because of thoughts such as “Isn’t McCain a little too old?” or “Would Obama’s tax plan have a negative effect on me?”

In the afternoon of the 2004 presidential election, all of a sudden the majority of people started to bet that George W. Bush would lose the election based on the exit poll. Most people said they voted for John Kerry when they left the poll, which was not true.

Polls during elections are often used for psychological warfare. There are too many uncertainties that can change the outcome of an election.

Either one of the candidates has a chance to win since the polls are not reliable. Their campaign policies are especially important now.

I have seen all four presidential and vice-presidential debates. Generally, I felt McCain and Obama were not at their best. The key issue for me is that both McCain and Obama invariably tried to please the public when it comes to coping with the economic crisis. Neither of them resorted to basic morality.

I want to mention a very interesting story of former U.S. president Harry Truman. After World War I, Truman left the military and started a business with a friend. However, he lost all his savings and owed $20,000 because of the economic downturn in 1921. If he had filed bankruptcy, he could have avoided paying the money back. Truman pinched and scraped for 15 years to pay off his debt.

We see noble virtue in this story—a sense of responsibility.

In the vice presidential debate, I was impressed with something Sarah Palin, the Republican Vice-Presidential candidate said, “Let's do what our parents told us before we probably even got that first credit card. Not to live outside of our means. We need to make sure that as individuals we're taking personal responsibility through all this.”

It is a pity both presidential candidates talked about nothing but how they were going to save those who lost their houses. Neither of them tried to propose or even mention a solution addressing the problem of the financial industry or subprime home owners not having a sense of responsibility for their decisions.

The bailout plan transfers the sub-prime crisis to all tax payers and lays a terrible foundation for the financial industry—when you get yourself in trouble so deep that no one can help you, your problem becomes everybody’s problem.

In fact, when the bailout plan failed to pass the House the first time, it reflected that most Americans have a sense of responsibility. Even if the bailout is inevitable, if Obama or McCain could resort more to a basic moral standard for the ultimate solution, rather than proposing unrealistic plans about how to protect everyone’s interests, they could have won more support from the voters.

Diplomacy is an extension of domestic politics. Problems emerged from the U.S. economic model, weakening its international diplomatic position.

Ideologically, communist China is the biggest threat to the United States . China is behind almost every country that stomps on human rights, including terrorist countries such as North Korea, Sudan, Zimbabwe, Iran and Burma. Because the Chinese Communist Party (CCP) created a large trade surplus selling cheap goods from numerous sweat shops in China, the majority of the trade income went into U.S. bonds. As Americans are spending money they borrowed, China has kidnapped the United States.

In the debates on foreign policy, the topic of U.S.-China relations went missing.

Under the CCP’s rule, the persecution of religious groups has wiped out ethics from the public’s mind and planted numerous social crisis bombs. Officials relentlessly rob and suppress the Chinese people; the people produce poisonous or substandard goods without the slightest hesitancy, all for profits. Now the babies have become the largest group of victims and these products have also been exported to the United States.

There is an apparent trend that citizens in China can no longer tolerate the CCP’s rule. From the massive protests because of [CCP] heinous crimes to ordinary citizens attacking police, over 90,000 protest incidents occur each year. These are warning signs that if human rights in China does not improve, large scale social unrest will occur.

If the United States really wants a stabile Far East, a stable and responsible China is essential. This can only be realized through political reforms and reconstruction of culture, moral standards and religious beliefs. Supporting human rights in China is not only a moral and just obligation for the United States, it answers to the United States’ long term interests.

Neither presidential candidate raises this human rights issue nor shows superior political wisdom or style. Only a candidate with a sense of morality can move and inspire the American people.