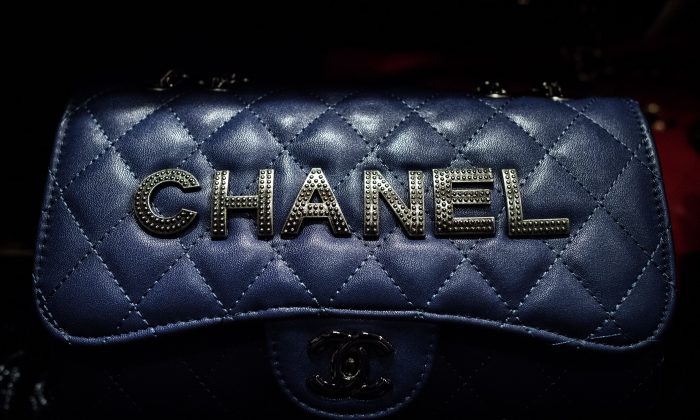 A Chanel counterfeit luxury bag is displayed during a press conference following a record seizure at the customs headquarters in Hong Kong on August 6, 2015. (Philippe Lopez/Getty Images)
US News

How Sham Tricks Sam: Methods of Concealing Counterfeit in America

NEW YORK—Strolling down a Manhattan street, you might stumble upon “Gucci” wallets and “Prada” purses strewn on a white sheet for sale at bargain prices. If you’re really attentive, you may also notice a customer exiting a low-end leather shop clutching a brand new “brand name” bag.

These are all counterfeit goods that have been smuggled into the country by criminals, cheating consumers and undermining the American economy.

The report says that China now produces more goods in general than the U.S. and is still the world’s principal IP (intellectual property) infringer.

According to the report, China is committed to policies that include reaping foreign technology and information, and these policies that have contributed to greater IP theft.

“The United States constantly buys its own and other states’ inventions from Chinese infringers,” reads the report.

In August, 22 people were charged with smuggling Chinese-manufactured counterfeits into America.

The Department of Justice (DOJ) said in a press release that according to court filings the defendants were involved in a multileveled counterfeiting operation, which included importing, shipping, and distributing the illegal goods.

“[B]rought by ocean-going ships to the United States in 40-foot shipping containers, [the alleged counterfeiters] smuggled through ports of entry disguised as legitimate imports and distributed throughout the country,” the DOJ said.

Detective James Ricaurte learned the ins and outs of counterfeiting as a New York Police Department detective. In 1994, he made headlines after a successful sting operation to recover a $1.75 million-Stradivarius stolen from a Rolls-Royce. He had gone undercover as a buyer of stolen goods and was so convincing, that he found a second violin too that was stolen from the same car.

Ricaurte also worked for the DOJ, and is now owner of Allegiance Protection Group, a Manhattan-based private investigation and security firm. Some of his company’s services include investigating potential counterfeit. He’s also a member of the International Anti-Counterfeiting Coalition.

Ricaurte talked about some of the sneaky methods counterfeiters currently use.

For example, counterfeiters often set up businesses that sell generic products to insulate themselves from police, which is something that the 22 caught with half a billion dollars worth of Chinese fake goods were accused of.

“So everybody’s seen the generic handbag stores along Broadway in the 30s [30-40 streets] where you walk by a store and you have all these pocketbooks that are similar to that of a brand name or color scheme, so you’ve got to think to yourself, ‘How many bags do they have to sell, and how popular are those bags, to justify how many containers of shipments of those type of bags coming in?’” Ricaurte said.

He said those generic bags are used when someone goes into a store and asks for a name brand handbag. The counterfeit seller then take the brand label and attaches it to the generic handbag.

“And it now becomes a brand name counterfeit,” he said.

Ricaurte said it takes about seven seconds for that seller to take a label from a secret hiding spot, place it onto the bag, then sell it to you for $75 versus $20 or $25 without the label.

In the case of the 22 charged in August, the DOJ outlined the smuggling methods several are accused of.

“They fraudulently used the names, addresses and other identifying information of legitimate import companies and falsified the descriptions of the containers’ contents on U.S. customs paperwork.”

Ricaurte said this how counterfeiters disguise their activities at the import stage. He said they use a good standing shipping broker’s information, often without the broker’s knowledge.

The DOJ said that these alleged counterfeit importers also used “burner” phone numbers and email accounts to conceal their identities.

Burner phones are prepaid cell phones that don’t need a service contract or legitimate identification. Counterfeiters use them only within counterfeiting operations; they don’t use them for personal calls. If a criminal thinks police are onto him, he just ditches the phone and gets a new one.

Ricaurte said that independently owned mailbox drop centers are also used to send out and receive counterfeit products and as a “layer of insulation” to avoid being discovered. The guys who run them can also tell them when a package arrives, or if police have been asking questions or monitoring the location.

While some people may go to tourist areas looking for counterfeit, others get tricked into buying counterfeit online when they weren’t asking for it.

The internet is a major area that counterfeiters use for distribution, Ricaurte said.

“Counterfeiters set up websites, and become third party suppliers and display an image of what appears to be a genuine product, but then a counterfeit products is ultimately provided to the consumer.”

Counterfeits are also usually manufactured in questionable circumstances, according to Ricaurte.

“You don’t know what materials are being used. You don’t know the circumstance behind the making of that counterfeit, that fake good,” he said.

“We have regulations in this country, and agencies that enforce those regulations to a standard, so that the consumer is protected.

“So what they [brand name companies] are putting out there is not going to explode when you plug it in or it’s not going to create a rash when you put it on, or whatever the case may be,” he said.

Ricaurte sees a lot of other harmful impacts of counterfeiting too.

For example, less sales tax is collected—dollars that help to fund community services such as police, firefighters, ambulances, and schools.

American employers and employees are impacted too, like factory workers, logistics companies, shippers, as well as the retail industry and its sales force, he said, adding that the innovator not only has to compete with legitimate competitors, but with counterfeiters too.

“So it’s not on an even platform by any means,” he said.