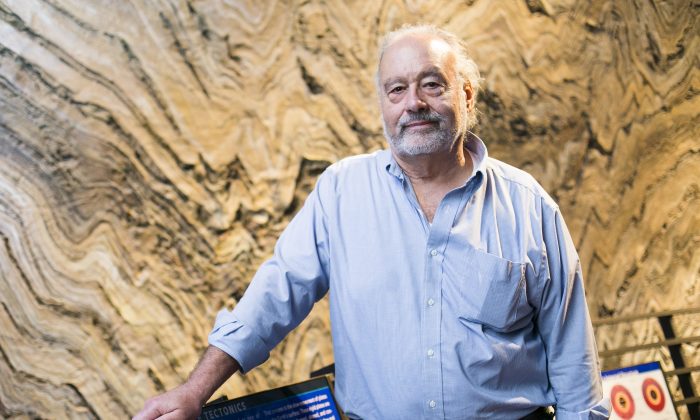 Dr. Edmond Mathez, Curator of the Department of Earth and Planetary Sciences at the American Museum of Natural History in New York City on Oct. 15, 2015. (Samira Bouaou/Epoch Times)
Environment

NEW YORK—Dr. Edmond Mathez, Curator of the Department of Earth and Planetary Sciences at the American Museum of Natural History, gave me a personal lesson on the early dating of climate events, done through analyzing long cores of glacial ice (ice cores), as a way to shed light on modern-day climate change. He addressed the question of whether or not greenhouse gases are influencing climate today.

“Studying past climates was really an important part of understanding how the present climate system works,” he said, during the tour of the Gottesman Hall of Planet Earth. Mathez, a geologist who is the curator of this permanent exhibit, studied climate change for three years and authored a book on this topic. Among Earth-related questions like how our planet works, the exhibit addresses the question of what causes climate change.

Created in 1999, the exhibit focuses on ancient records of climate change, because that’s what interested the scientific community at that time, Mathez said. He carefully impressed upon me that climate is “a really complicated system,” because past and present climate measurements operate on different scales.

“There are … changes that occur on scales that we’re familiar with, like the daily change of temperature, the seasonal change … but then there are longer term, decades, centuries kinds of changes that … we really didn’t understand very well,” he said.

The exhibit contains a replica of one of the Greenland ice cores and its charted dateline as well as another dateline record for an ice core analyzed in Antarctica. The ice core replica shows the demarcations of hundreds of thousands of years of temperatures. Mathez described how to read the layers: “Fluffy white compacted snow with a lot of porosity in winter; and clear, melted snow with fewer little bubbles in summer.”

Other proxies include analyses of water, sea salt, and oxygen, he said. According to the Climate Change Institute, snowfall that collects on glaciers each year also captures concentrations of ash, gas bubbles, and human pollutants. It states that in addition to providing a proxy for temperature, ice cores can reconstruct atmospheric circulation strength, precipitation, ocean volume, volcanic eruptions, forest fires, and solar variability.

According to Mathez, some large volcanic eruptions can influence climate for short periods of time, but those are not the climate issues that we are concerned about, he said. He found it fascinating that climate shifted dramatically at about 15 degrees Centigrade according to studies of the Greenland ice cores, noting that similar Antarctica records were “much, much less dramatic.” He added that this phenomenon was not happening globally [at that time]. Therefore, “This is good evidence that these are natural changes,” he said, and indicative of the last ice age.

Since the 1950s, scientists have been charting the CO2 content in the atmosphere based on direct observation and comparing it to historical CO2 content, which varied between about 180 parts per million (ppm) to about 290 ppm, according to Mathez. He said now CO2 content is 400 ppm.

NASA’s climate website states that the current warming trend is proceeding at an unprecedented rate. It charts a comparison of CO2 samples contained in historical ice cores with recent direct measurements and concludes that carbon has increased considerably since the Industrial Revolution (1760–1840). The heat-trapping nature of CO2 affects the transfer of infrared energy through the atmosphere, and the current trend is likely human induced, it says.

Mathez said it’s really difficult to associate specific events like natural disasters with climate change, but we really don’t know what the future’s going to bring in terms of emissions. So the question we should be asking ourselves is how are the increased CO2 levels or greenhouse gases (GHGs) influencing climate, “or even are they?” he said.

Whether or not greenhouse gases are influencing climate may not be necessarily clear, but Mathez said humans are obviously increasing CO2 levels because of how much fossil fuels they are burning.

He listed three factors he relies on: First, basic physics says that CO2 should cause the climate to warm, because “you can measure the absorption of infrared radiation by carbon dioxide and other GHGs,” he said. It doesn’t necessarily mean the climate is being warmed, he cautioned, but that’s how CO2 works and it should have a warming effect.

Second, he observed that changes in the climate system are consistent with warming due to the rise in GHG concentrations in the atmosphere.

Third, he said emphatically, “no one has dreamed up any other mechanism to account for those observations.” He said we wouldn’t be here if GHGs were not in the picture. “The Earth would be frozen,” he said.

But Mathez warned that we have to be careful about how things are stated. We can say, for example, “Extreme weather events are more probable with climate change that our models show” or “this event was probably due to climate change,” but it’s impossible to attribute one event to climate change.