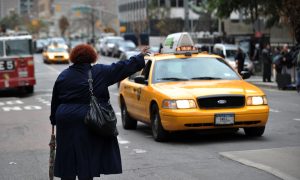 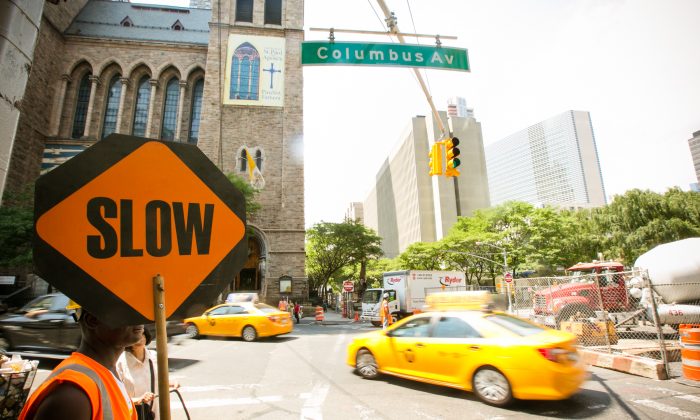 The intersection on Columbus Circle where a pedestrian was run over by a taxi on July 1, 2014. (Edward Dai/Epoch Times)
New York

How Safe Is Your Taxi Driver? Top 295 Honored by NYC TLC

NEW YORK—”How many of you thought you were receiving a summons?” Taxi and Limousine Commissioner Meera Joshi joked to a room full of the city’s safest drivers. In what drivers said was a refreshing change in tone, the TLC held a ceremony Monday to honor drivers who have had an unblemished record for at least the last five years.

“This is arguably one of the toughest places to do the work you do,” said Mayor Bill de Blasio, addressing the drivers. In February, the mayor launched his Vision Zero initiative with the goal of reaching zero traffic fatalities within a decade. Taxis set the tone on the streets of New York City, de Blasio said, and these drivers who have made the Safety Honor Roll will set an example for their fellow drivers.

In total, the 295 drivers logged 20 miles and picked up over 8 million passengers in the last five years—through New York City traffic and weather—without any crashes involving injuries, traffic violations, or violations of TLC safety-related rules.

Council member Ydanis Rodriguez, chair of the transportation committee, handed a proclamation to TLC chair Joshi at the ceremony and reminded the group to think about the human side of Vision Zero.

When Vision Zero was first introduced, tensions between the different groups using the streets still lingered. Through the many narratives of families losing loved ones in recent years, the street safety focus has shifted.

“This is about the human part,” Rodriguez said. “If we look at the numbers we all put the blame on each other.”

Angel Miqui, a medallion owner who has been driving since 1987, says passengers in a rush will sometimes ask to speed up or to get out a cab in an unsafe spot, but as a driver he feels responsible to act safely.

“You have to use your mind—everything, every movement, and what the passenger does—you’ve got bicycles, you’ve got kids, cars, you’ve got too many things running around and anything can happen and I try to avoid all of those things,” Miqui said.

Since Vision Zero has launched, Miqui says he’s seen a difference on the streets already. The speed limits on major thoroughfares like Broadway, and school zones, are being lowered, and drivers are taking notice.

Drivers might be used to driving at 40 mph in a 30 mph area, and when it becomes a habit the drivers do not realize how fast they are going, he said. With the new signs, people are slowing down and thinking about their speed.

See the complete list of the 295 drivers on the 2014 TLC Safety Honor Roll here.