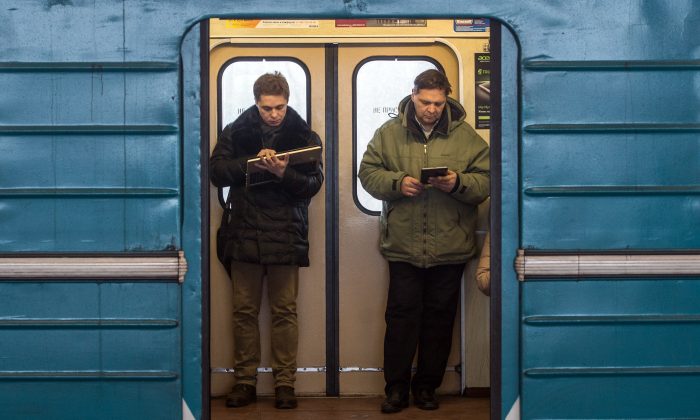 How Russia Is Building a Psychological Firewall Against the West

President Vladimir Putin of Russia may fear that the Internet is a CIA project, but unfortunately he is not alone.

In fact, our research concludes, the Russian public’s distrust of Western sources and dissident information on the Internet creates a “perceptual filter” that bolsters Putin’s foreign and domestic policies.

A Deep Distrust of the Internet—Domestic and Foreign

Based on a survey of 1,600 individuals (see details below), almost half of all Russians believe that information on the Internet should be censored. Likewise, two out of five Russians distrust foreign media and nearly half of Russians believe foreign news websites need to be censored.

These attitudes are partly driven by the fact that 42 percent of Russians believe the Internet is being used by foreign countries against Russia.

In contrast, Central Russian TV news, heavily dominated and controlled by the Russian government, is a primary source of information for 84 percent of Russians and trusted by 90 percent of all Russians.

Put together these attitudes about a malicious foreign influence over the Internet and perceived threats to political stability from domestic anti-government blogs and websites, and you have a toxic mix.

Large majorities of Russians have negative feelings toward anti-government online content. These feelings translate into significant portions of the public supporting censorship—of social network groups that organize anti-government protests (46 percent), of online videos by the dissident rock band Pussy Riot (45 percent), and of bloggers that call for regime change (43 percent).

Based on these perceived external and internal threats, it should not be a surprise that the Federal Russian Security Service is the organization most trusted as the regulator of the Internet.

The prevalence of these perceptions among the Russian public is no accident.

For some time, the Russian government has been weaving two complementary narratives. The first is that foreign countries use their technological dominance over the Internet to pursue economic, political, and military objectives in Russia. The second is that homegrown online activists and “extremists” use the Internet to destabilize Russia’s political system.

These narratives have provided the justification for a range of regulatory initiatives by the Russian government over the last two years.

Popular (which is officially defined as 3,000 daily readers or more) blogs and websites have to be officially registered. All websites and social media platforms have to physically store six months of user data inside Russia. Since November 2012, a blacklist law allows the Russian government to filter and block any websites or social media deemed to contain offensive material. A foreign media ownership law that took effect in October 2014 led CNN International, for example, to cease broadcasting inside Russia.

All this can be seen as a larger project by the Russian government to further tighten control over the flow of news and information.

Previously, the Internet had been less censored and more pluralistic than the government-dominated mass media. This meant Russians had access to a wider range of views and information than was available in Russian TV news and newspapers.

The new focus on Internet regulation and foreign broadcasting will allow the Putin regime greater control over the Russian public’s access to information, regardless of whether it stems from within or outside Russia.

What’s more, the Russian public’s support for government regulation provides an extra “psychological firewall” against alternative sources of information. And this firewall—being based on belief—is particularly difficult to circumvent.

Russia Is Not Alone

Russia is not the only illiberal democracy increasing control over domestic and foreign online content while attempting to convince its citizens of the threat posed by a free and open Internet.

The Turkish government, for example, has followed a similar path in recent years with its attempts to block anti-government online and social media content. The recently elected Turkish president went so far as to call social media “the worst menace to society.”

In both the Russian and Turkish cases, Internet censorship and information control help the regimes’ efforts to build and maintain public support, or at least passive acceptance, for their foreign policy objectives.

The Turkish government has attempted to block information about its possible support of Islamic extremists fighting the Assad regime inside Syria.

In Russia, government domination of the news cycle has been instrumental in driving the sky-high approval ratings of President Putin (in the mid to high eighties) since the annexation of Crimea and conflict in eastern Ukraine, even as the Russian economy has gone into free-fall.

Promoting media and Internet freedom—and with it public understanding and demand for these freedoms—should be considered among key American foreign policy priorities as suggested by former Secretary State Hillary Clinton back in 2010.

As we see with Russia, autocratic-leaning governments may use increased Internet regulation and propaganda against dissident voices as a means to close the remaining cracks in the information bubbles surrounding their citizens.

Once hardened, these information bubbles allow governments to build further support for their illiberal regimes and to pursue their foreign policy objectives without the democratic accountability that can prevent unprovoked international conflict—as Russia has been doing in Ukraine over the past year.

Erik C. Nisbet is an associate professor of communication, political science, and environmental policy and a faculty associate with the Mershon Center for International Security Studies at The Ohio State University. Sarah Mikati is an honors student in journalism and Middle East Studies at The Ohio State University. This article was previously published on TheConversation.com.