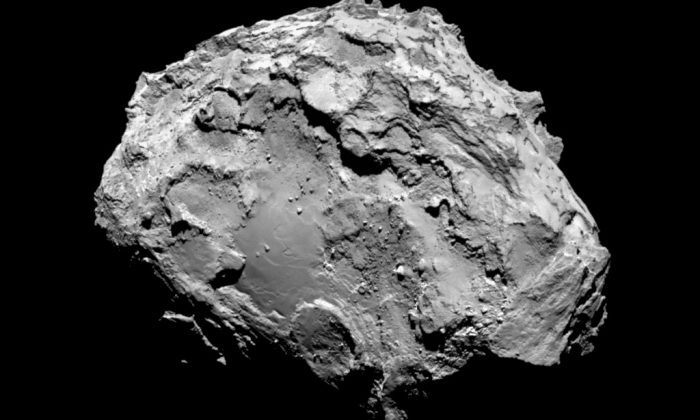 In this handout from the European Space Agency (ESA), the comet Comet 67P/Churyumov-Gerasimenko is seen in a photo taken by the Rosetta spacecraft with the OSIRIS narrow-angle camera Aug. 3, 2014 in space. (ESA/Rosetta/MPS for OSIRIS Team MPS/UPD/LAM/IAA/SSO/INTA/UPM/DASP/IDA via Getty Images)
Science

Imagine launching a robotic spacecraft on a ten-year mission to land on a comet, 600 million kilometres from Earth, knowing that you will not be able to make any physical repairs to the craft during the journey. This daunting engineering challenge has been the ultimate goal of the European Space Agency’s (ESA) Rosetta mission.

We know now that the landing has at least been in part successful, with the Philae lander touching down on the comet.

This ground-breaking mission hopes to improve our understanding of the origin of the solar system, by performing direct measurements on the rocky, icy surface of comet 67P/Churyumov-Gerasimenko, which orbits the sun between Earth and Jupiter.

In order to reach the comet, the Rosetta satellite has travelled a total distance of 6.4 billion km, gaining speed by swinging through the gravitational pull of Earth (three times) and Mars (once) along the way. Rosetta caught up with the comet in August 2014, and slowly entered a complex orbit.

Rosetta deployed the Philae lander on the morning of November 12. After a seven-hour descent and a tense wait in the control room, Philae touched down and radioed Earth via Rosetta to confirm success. Radio signals take 30 minutes to travel from Rosetta to Earth, and so the separation, descent and landing all happened semi-autonomously.

The 100kg lander has ten main scientific instruments on board, including gas, acoustic and magnetic sensors, two cameras, and three spectrometers, covering a wide range of wavelengths and compositions.

The Rosetta and Philae craft have now survived ten years in space, travelling at speeds up to 50,000 km/h, without maintenance or repairs. It is rare that any piece of comparably sophisticated earthbound technology continues to work for ten years without maintenance – to do it in space is an enormous technical accomplishment.

In order to guarantee astronomical reliability, the craft were subjected to extensive lifetime and robustness testing on Earth. The aptly named Multishaker facility in the Netherlands, as well as the ESA’s Large Space Simulator, Europe’s largest vacuum chamber, put Rosetta through a series of gruelling vibration, thermal and vacuum tests prior to launch. The spacecraft was subjected to temperatures as low as -180°C and as high as 150°C.

Despite these efforts, a number of unexpected difficulties emerged during the journey. In 2006, problems were identified in the system of thrusters and flywheels used to steer and orient Rosetta, including a fuel leak and anomalous friction. In order to monitor thruster problems, Rosetta even used an on-board mass spectrometer to “sniff” its own exhaust.

These issues have since been a considerable cause for concern, but are not catastrophic. Shortly before Philae’s descent, it emerged that the cold gas thruster used to push the lander towards the surface of the comet had failed, requiring a passive fall to to the ground. Upon landing, Philae was supposed to use a system of harpoons to anchor itself, ensuring stability in the comet’s low gravity, but these may not have worked or failed. Philae is now clinging on using a less sophisticated technology: a set of three screws, which are driven into the comet’s surface.

Philae will now rely on battery power to complete the first few days of experiments. After that, secondary batteries that are recharged by solar panels will provide power for a period of up to three months.

This will be a fascinating time for the project, as Philae rides the warming, melting comet towards the sun. How long will the lander survive on the surface? To a large extent this will be determined by how much dust settles on the solar panels. Our research shows that dust can have a dramatic effect on the amount of power generated by solar panels in dry regions on Earth, even when the panel is perpendicular to the surface, such that dust has the least chance of sticking to the panels.

Dust in the Sun

Part of the uncertainty comes from the fact that it is difficult to predict how much dust exists in the region of the comet, and how the local conditions affect its transport. In the case of NASA’s Spirit rover, the mission lifetime was significantly extended by so-called “cleaning events” where the build-up of dust on the Rover’s solar array was removed by wind. These allowed the Rover to operate for much longer than the planned three-month mission.

Rosetta mission’s lifetime will stretch to March 2015 at the latest, when the comet is closer to the sun and the temperature will rise above practical operating conditions. But Philae will probably have been lost by that time. As Comet 67P gets closer to the sun, its interior will heat up, releasing dust and gas in the form of geysers and there is a good chance Philae might be hit by one of these and thrown into space.

The ambitious nature of the Rosetta mission has captured the imaginations of millions of people around the world. As we cast our eyes to the sky in awe, it is important we stop to remember the vital multi-disciplinary contribution of the scientists and engineers who have designed and created the essential instrumentation that could be vital to the ultimate success and lifetime of this thrilling endeavour.

Neil Beattie does not work for, consult to, own shares in or receive funding from any company or organisation that would benefit from this article, and has no relevant affiliations. This article was originally published on The Conversation. Read the original article.