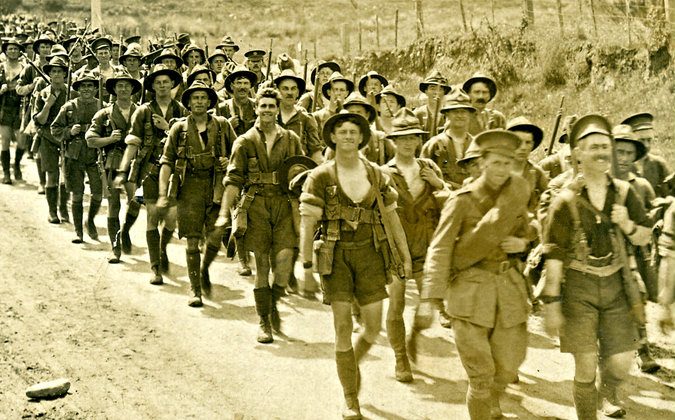 Ready, but not necessarily equipped. (Phillip Capper, CC BY)
Europe

How Ready Was Europe for World War I?

Helmuth von Moltke the Elder, who masterminded Prussia’s victory over France in 1870, wrote the words often paraphrased as, “No plan survives contact with the enemy.” His son commanded the German army as World War I broke out.

In fact, the degree of preparedness of the Great Powers for war in 1914 has as many layers as an onion. Here are four.

In various ways the war was anticipated, planned, and even welcomed. War was planned in Berlin and Vienna. It was welcomed in St Petersburg, and to some extent in Paris.

Anticipation of the war was widespread among national political elites. The element of surprise was greatest for the mass of people who were uninformed in every country. For the leaders there were differing degrees and kinds of anticipation, but one feature of the prewar period was that all the Great Powers had shared knowledge of each others’ war plans. The sharing arose partly through espionage, partly through intentional diplomacy.

This led to a situation where, on one side, all the leaders understood the potential for specific conflicts to trigger a general European war. This is one reason why Britain tried hard to mediate in the July 1914 crisis. These efforts were unsuccessful because others were willing to take the risk of a wider war or even intended to bring it about.

Did the Leaders Understand What Was Coming?

Yes, although not fully. Too much has been made of the idea that everyone expected a short, victorious war. This expectation was widespread only among ordinary people who had no influence on decision making. German war plans were for a short, victorious campaign but even their authors understood they represented an outrageous gamble. The idea of a short war was a hope, not a calculation.

Signs of an understanding that the war might drag out and that victory could turn to ashes are everywhere in the decisions and documentation of the time. They are represented in the German decisions to respect Dutch neutrality, leaving Dutch ports open to neutral trade, and to attack British shipping. These made no sense unless the war was drawn out. They are explicit in the diaries of leaders on all sides (including the younger Moltke’s). Who could forget British foreign secretary Sir Edward Grey’s words on the eve of war:

Did the People Understand?

If not at first, they quickly adjusted. In every country national feeling swung quickly behind the war effort, with only small and isolated minorities opposed. In fact, without this, it would be impossible to explain how any country could have supported the devastating casualties and huge economic burdens of the war for years on end. Only during 1917 did clear signs of social strain begin to emerge in most of the countries that were at war.

Public support for the war was to a considerable extent spontaneous, but its mobilisation was also managed. Notably, German leaders knew they would strike first in the coming war, and a major pre-war concern was to ensure the German public would perceive their country as acting to defend itself against Russian aggression.

Were the Soldiers Equipped for What Came Next?

No. In the early stages of the conflict, three kinds of troops went on the offensive: infantry, gunners, and railway and horse troops for supply. They faced rifles, guns, and static machine guns. It soon became apparent that infantrymen had no offensive equipment that could answer the gunfire of a positional defence.

The infantry had rifles that they could fire standing up (making them vulnerable) or lying down (so they could not move). They could not fire and move at the same time. The gunners behind them could try to suppress the defending fire, but they often failed because gunfire was inaccurate and insufficiently heavy. This is why attacking infantry so often walked forward to their deaths.

The volume of munitions required to advance was so great that the supply troops could not bring it to the front when the front was moving, and the Great Powers’ economies lacked the industrial capacity to produce it. Having traditionally relied on its Navy for defence, Britain was more unprepared than most.

Three things eventually restored the ability of the infantry to fire and move. New offensive infantry equipment was developed, such as automatic weapons, rifle grenades and trench mortars. The volume and accuracy of artillery munitions increased enormously. Assault vehicles and aircraft were used in combat for the first time.

All these relied on a colossal mobilisation of productive capacity, which was more successful in Britain than in any other country. These developments explain why the last year of World War I begins to look like the coming years of World War II, with breakthroughs, mobile warfare, and heavier casualties on both sides than those resulting from trench warfare.

Mark Harrison is Professor of Economics at the University of Warwick. He is also a research associate of Warwick’s ESRC Centre on Competitive Advantage in the Global Economy and a research fellow of the Hoover Institution of War, Revolution, and Peace, Stanford University. He writes on the history of communism and the economics of fighting, stealing, cheating, lying, and spying. This article was originally published on The Conversation. Read the original article.