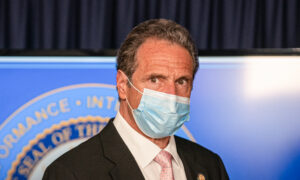 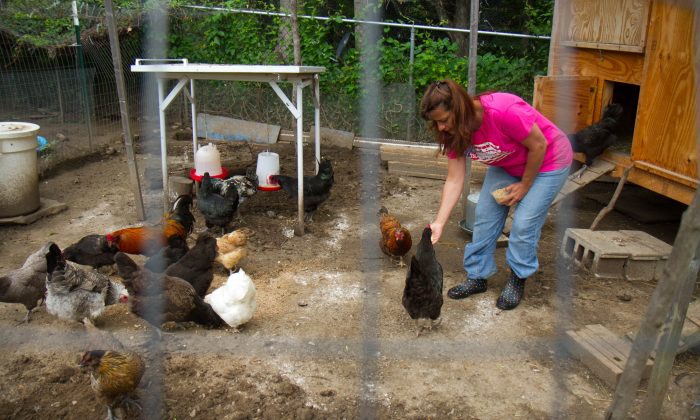 How Raising Chickens Led to Solace, Health, and a Living

CUDDEBACKVILLE, New York—Cheryl Blaese had lost her job as an administrative assistant when Tractor Supply Co. in Chester, New York ran out of ducklings.

She had been raising ducks for ten years because, “My nephew said to me ‘Can you make me some ducks?'” she recalls. She had not forayed into chickens before but she decided to give it a try as a way to make a living.

“At this point I had lost my job so I said, ‘I’ll just take chickens.’ And I cried,” she recalled.

That was 2010 and Blaese, having lost the job she had worked at since she was 18, needed to find other employment. She knew she had a choice—take another stressful job like her previous one that had put her on blood-pressure medication, or find another way to make ends meet.

“I needed something happy, something that’s just going to make me feel good inside,” she recalled.

That’s when she decided to start raising chickens to sell for meat, eggs, and eventually chicks.

That was six years ago, and since then what she calls “chicken math” has happened.

She got her own incubator and her original flock of six chicks (three of them turned out to be roosters and had to be killed) now consists of around 22 birds.

She has a rainbow of varieties—Ameraucanas, Welsummers, Silkies, and Easter Eggers, i.e. mixed breeds—that produce eggs with a rainbow of colors.

I needed something happy, something that’s just going to make me feel good inside.
— Cheryl Blaese, Chicken Breeder

They live in a pen called “The Chicky Coop” hemmed in on all sides with fencing and above by metal netting to keep predatory birds out. The coop is right next to the six mallard ducks in her one-acre yard in Cuddebackville.

A hawk had gotten behind the fence of the coop and “kept killing them [the chickens] behind my coop,” she said, recalling how, after coming back from a vacation in the winter and finding 10 less birds, she had to install the overhead netting. “When I let them out here [in the yard], I’ve learned the hard way, I have to be home.”

From her flock, she gets between seven and 10 eggs a day depending on the weather and the stress levels of the birds.

Even though that is more than she and her family can eat, she hasn’t tried to market them because at $2.50 a dozen, she is worried she wouldn’t be able to meet the demand.

“I can’t put the sign out [on the road] because I have all these people who want them and they [the chickens] don’t produce enough,” she said, recalling how many people showed up when she did.

While her eggs cannot legally be labeled organic, free-range, or cage free because they are not certified, similar free-range eggs in the grocery store cost upwards of $5 a dozen.

She says she keeps the price low because she knows Deer Park’s economy is struggling and she wants her neighbors to be able to afford them.

“I don’t want to make big bucks, I just want people to have good eggs,” she said.

Despite how little she charges for eggs, her birds are treated like royalty. She gives them a smorgasbord of corn feed, lettuce, tomatoes, fruit, and cheerios, and when she is at home, the run of her yard.

“The bad thing is, once they stop laying, since they are my friends … they’ll live here forever because I can’t … I’m the worst farmer in the world, because they’re going to live here till they’re dead,” she said.

Except for the meat birds each one has a name. As she lets them out on an overcast morning in June, she introduces them by name: Chocho, Train, Sunrise, Sunset, Thumper, Doc, Cod, Whisper, Snowball, Snowy, Bella, Azeala, Tiger , Bubba, Tebow, Happy, Coal, Blackie and AJ.

I’m the worst farmer in the world, because they’re going to live here till they’re dead.
—  Cheryl Blaese, Chicken Breeder

One meat bird that bonded with her chicks and she affectionately calls “Snack” is so fat that he can barely stand and lives by himself in a separate pen. Even though he is just a little shy of four months old, in meat-bird years that is ancient—most are killed at around 2.5 months, Blaese said.

Blaese herself is a hunter and eats the meat birds she raises, but with the birds she has formed a connection with, the parting is hard.

She told her husband, who is a butcher by trade, he can end Snack’s misery while she is away at a meeting on Wednesday so she won’t be around.

“That’s like killing your dog,” she said about the birds she has bonded with.

Raising chickens has also been a boon for Blaese’s health.

In 2005 she had her gall bladder, whose bile helps break down fats, removed. After that, she couldn’t eat the eggs from the grocery store without enduring agonizing symptoms.

“I think it’s the fat content—that’s my opinion,” she said, adding she can’t eat her duck eggs, which have a higher fat content, either.

A 2007 study of 14 flocks of pastured hens by the liberal bi-monthly magazine Mother Earth News found that, compared with conventionally raised eggs, pasture-fed chickens produced eggs with one-third the amount of cholesterol, one-quarter the amount of saturated fat, and twice the amount of Omega 3 Fatty Acids, among other benefits.

Everything I’ve done now is so different from anything I’ve ever done and I love it. I actually love it.
— Cheryl Blaese, Chicken Breeder

While it was an economic decision that led Blaese to raise chickens for profit, it has also been a positive lifestyle change.

She works at the Cuddebackville Fire House as treasurer, just a few minutes away by car, and between that and her chickens, is able to pay the bills.

“Everything I’ve done now is so different from anything I’ve ever done and I love it. I actually love it,” she said.

She says she would one day love to get a cow, but for now, her chickens and ducks keep her plenty busy.