How Trump Can Turbo-Charge Patient Freedom and Lower Medical Costs 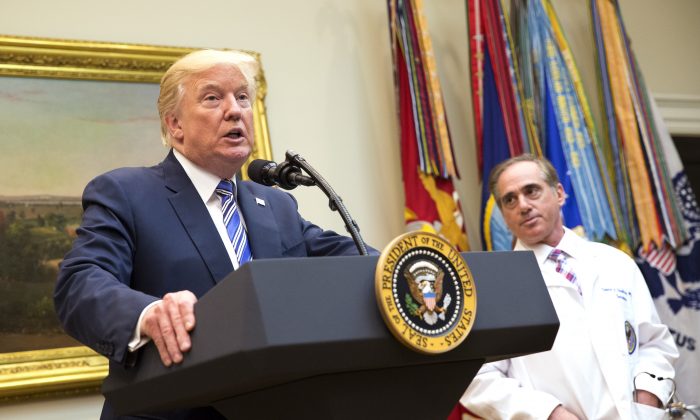 Free markets in medicine are not “broken”—they have not been allowed to work since 1944, when wartime federal policies began disturbing market forces. Federal control of prices and service delivery further expanded following the Medicare Act of 1965.

Step One: Trump is urging the Department of Labor to expand the use of Association Health Plans (AHPs). AHPs allow Americans of shared interests and connections to join groups that form health insurance plans they control. AHPs offer three major advantages: potentially huge cost savings, escape from state-based required coverages, and employees more easily able to keep current health plans if they change jobs. AHPs are estimated to cost about $9,700 per year less by 2022 than the individual market.

Step Two: Trump proposes that the Department of Health and Human Services (HHS) expand access to short-term health plans and allow guaranteed renewability. Under President Barack Obama, these plans were limited to 90 days of coverage and could not be renewed. Secretary Alex Azar is expected to extend the short-term plan limit to 364 days. Coverage is estimated to cost on average $342 a month, versus $619 per month for an Obamacare exchange plan. If consumers are allowed to retain renewable plans in the long term, these plans would resemble what medical insurance used to be, and patients with expensive illnesses would not be forced back on the higher-cost Obamacare exchanges.

Step Three: Turbo-charge free-market changes by allowing patients to use their health savings account funds for direct payments to physicians who offer “direct-pay” practices free of insurance controls. Such practices may be called direct primary care (DPC), concierge medicine, or simply “fee-for-service.” Before the 1980s when managed care came to dominate, patients paid doctors directly. Costs were lower, and insurance company bureaucrats did not have to “approve” treatment.

Some direct-pay practices also offer medications at far lower costs than available on Medicare Rx plans. Direct-pay options are sweeping the country as patients yearn for more quality time with their doctors at an affordable price.

The advantages of direct pay should be obvious, but shockingly, the Internal Revenue Service under Obama blocked the use of DPC for the 30 million Americans with HSAs. John Koskinen, the same IRS commissioner who stonewalled efforts by Congress to investigate Lois Lerner’s IRS retaliation against conservatives, issued a letter prohibiting patients from contributing to their HSA if they are in a direct pay practice. Further restricting consumers’ freedom, Koskinen’s letter prohibited HSA funds from being used for direct pay practices.

This flawed IRS decree, not legislation, is yet another example of Obama-era Democrats trapping patients in government regulations restricting patients’ freedom to choose lower-cost medical care. Senators Ted Cruz and Ron Johnson wrote Treasury asking for a reversal.  In addition, 1,125 patients and doctors have asked Congress to pass the Primary Care Enhancement Act (HR 365/S 1358) and force the IRS to change its misguided interpretation of the law.

Step Four: Trump promised to lower prescription drug costs and allow patients to purchase medications from overseas if similar quality and safety guidelines are in place. At present, the FDA appears to be sabotaging this promise by blocking several reliable Canadian and UK pharmacies from selling to Americans lower-cost, FDA-approved medications for which patients in the United States pay exorbitant prices under “insurance plans.”

One example is EstroGel (bioidentical estradiol), developed and approved in Europe in 1974, which remains the most popular and lowest-cost form of hormone replacement for women across Europe and Canada. EstroGel was not approved by the U.S. FDA until 2004, 30 years later, and it was about 10 times the European cost.

Step Five: Eliminate the “safe harbor” that protects pharmacy benefit managers (PBMs) from risking prosecution under the Anti-Kickback Statute. These companies, such as Cover My Meds and others, are paid to restrict physicians from prescribing many medications for patients unless they first do a burdensome “prior authorization.” PBMs interfere with patient care, add delays, and drive up costs with layers of costly bureaucrats. PBMs often make more profit from a drug than the manufacturer does.

Step Six: Trump should expand health savings accounts three ways: 1) Allow contributions past age 65 since many people are healthy enough to work to age 70 or 75 and beyond. 2) Raise the maximum limit on amounts patients may contribute to the HSA they own. 3) Expand the health care services allowed to be purchased with HSA dollars that Obama-era Democrats restricted.

Congress has broken its promise to repeal Obamacare. Trump can keep his promises to free Americans from Obamacare’s disastrous costs and restrictions on medical freedom by either directing HHS to take these steps now, or issuing an executive order authorizing these changes.

Patients and the health of the medical delivery system would be the winners.  The only losers would be CEOs, bureaucrats, and crony capitalist middlemen enriching themselves at the expense of patients and those who care for them.

Dr. Elizabeth Lee Vliet has been a leader in patient-centered, individualized medical care. She is a past director of the Association of American Physicians and Surgeons (AAPS) and the author of several books.