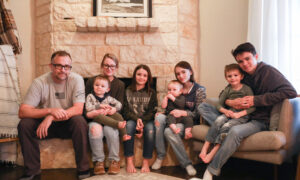 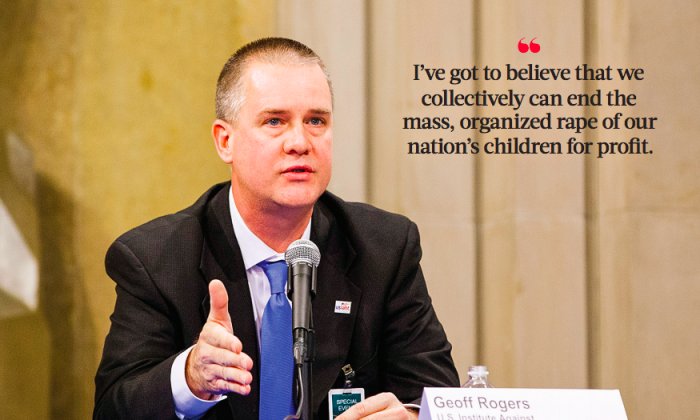 Geoff Rogers, CEO of the U.S. Institute Against Human Trafficking, at the Justice Department's Summit on Human Trafficking in Washington on Feb. 2, 2018. (Charlotte Cuthbertson/The Epoch Times)
US Features

How Pornography Is Creating New Age of Child Predators

WASHINGTON—Sex trafficking is a supply answer to a demand problem. But the least attention is paid to the demand side.

“So as we focus on demand, we’re trying to get to the absolute core of where this is coming from.”

Rogers said the National Center on Sexual Exploitation has collected evidence from numerous studies that prove that pornography and our hypersexualized culture are driving the insatiable desire for sex and the purchase of sex, including that of children.

“Societally, we need to shift. We’ve got to grab hold of this and understand that as a society it is not OK that we have an entire young generation of kids growing up with ready access to hardcore, deviant, violent pornography,” Rogers said.

“I heard one expert say it best—that pornography is one of the greatest unchecked social experiments that our world has ever seen.”

Gail Dines, an emeritus professor of sociology and women’s studies at Boston’s Wheelock College, has studied the impact of pornography for over 25 years.

In a 2017 paper, Dines said the domestication of the internet, beginning around 2000, made pornography “affordable, accessible, and anonymous—the three key factors to increase demand and consumption.”

An extensive 2010 study concluded that 90 percent of pornography scenes contained at least one aggressive physical or verbal act.

“The perfect storm is here, where we have a young generation of kids that have access to hardcore, violent pornography on their cellphones at age 9, 10, 11,” Rogers said. “They’re growing up addicted to pornography; that’s shaping their sexual template. And at some point, they’re moving from visualization to actualization.”

“If we had a scenario where we could rescue every single victim of sex trafficking in the country today, I would contend that, tomorrow, all we have is an incredible vacuum of supply that the traffickers would absolutely fill within a matter of time,” Rogers said.

Rogers launched the U.S. Institute Against Human Trafficking in 2016 with Kevin Malone, the former general manager of the Los Angeles Dodgers. Malone has been fighting trafficking for nine years, and Rogers five years.

Their mission is to end human trafficking in America.

“It’s a bold statement, but we do believe we can and we believe as an organization and a society, we must,” Rogers said. “I’ve got to believe that we collectively can end the mass, organized rape of our nation’s children for profit.

“Of all of the social problems we face, we should be able to stop that one.”

Rogers has helped set up a residential facility for boy victims of sex trafficking in Florida. The five-bed home opened last year for boys aged between 10 and 17.

He is also looking at how to consolidate the thousands of non-profits around the country to combat the problem from every angle.

He said real change will take the pulling together of criminal justice, the education system, businesses in the community, the healthcare industry, the technology industry, the faith-based organizations, and churches.

Rogers touted King County in Seattle as an example.

“What they found was when all of these organizations chased after demand at the same time, is when they saw this reduction,” he said.

Based on that model of success, Rogers developed the Trafficking Free Zone program, which is a replicable system that brings all community groups together to tackle the demand problem. Pasco County in Florida is the first county in the nation to sign on.

Rogers is also working with the Florida legislature to identify pornography as a public health crisis in the state of Florida. He is hopeful it will pass this year.

Gabe Deem’s story is just one of many thousands in America.

But it was at age 12 when his family got high-speed internet that things really ramped up for Deem.

In high school, it was more of the same, especially after Deem and his classmates got their own laptops at school.

Deem said he was unable to have a healthy relationship with women until he quit pornography in his early 20s.

“In retrospect, it is clear that pornography was affecting our behavior, how we viewed and treated our peers, and our sexuality,” he said.

Deem has since started a recovery community called Reboot Nation to help young people get help and quit pornography. It grew to about 10,000 members in three years, said Deem.

The shift from pornography to paying for sex with children is not a big one to make when looking at research in this area.

“So we can get very real on where this insatiable desire for sex with children is coming from,” Rogers said. “As a society, it’s time to get serious about the way that we’re approaching the topic of sex with our children, the topic of pornography, and the overall hypersexualization of our society.”

“I look at my young boys and I want to raise them to not become a buyer of sex,” he said. He said hearing stories of child sex trafficking and then coming home to his boys, who are the same age as children being trafficked is “an insane reality.”

He said he tries to instill values in his children on how to treat young women and what it means to be a man.

“And the problem that we have … everything that I can instill in my kids about how to treat women well, all they need to do is get a hold of pornography videos that are free online, one click away on a cell phone, and they will see the ultimate degradation of women in our society.”

And while girls are not the major consumers of pornography, they suffer the consequences, Dines said, “because they engage in sexual relationships with boys and men who have had their sexual templates shaped by mainstream online violent pornography.”

She said research from the American Psychological Association shows that girls who internalize the messages of the hypersexualized pop culture tend to have more depression, anxiety, lower self-esteem, eating disorders, and risky sexual behavior.

“Moreover, girls are more at risk for rape, battery, and being trafficked in a society where pornography is normalized,” Dines said.

She said unfortunately many parents are unaware of the degree of “brutality and dehumanization” that is common in today’s mainstream pornography, they have no idea that pornography is so accessible, and they don’t know how to approach their children about this topic.

“Parents are our first and often most influential teachers and, according to studies, a supportive family environment is a key preventive factor,” Dines said. “This means that it is imperative that they become educated about this serious threat to their children’s well-being, and that they are equipped with the skills needed to have ‘courageous conversations’ with their children.”