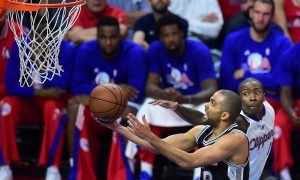 How Paul’s Injury Helped the Clippers

The Los Angeles Clippers, with the continued help of a strong bench, routed the Houston Rockets for a second straight game Sunday night, this time by a score of 128–95, to take a commanding 3–1 series lead in the best-of-seven set.

Houston center Dwight Howard was held to just 7 points and 6 rebounds in 18 minutes, while DeAndre Jordan scored 26 points, including shooting 14–34 from the free throw line, and grabbed 17 rebounds in the win.

Meanwhile the Clippers bench, once an Achilles heel of Doc Rivers’s squad, came up big again with Rivers’s son, Austin, scoring in double-figures (12 points) for the fourth straight game.

The younger Rivers, just 22 years old but in his third season out of Duke, is averaging 16 points per game in this series, after starting for the injured Chris Paul in games 1 and 2. The increased playing time has done wonders for Rivers—who was considered a talented “tweener” who had yet to excel at either guard position.

This was the same player who averaged just 5.4 points in the first-round series against San Antonio—including no points in the pivotal Game 7 win, that saw Paul go down with a hamstring strain.

Paul, who the Clippers traded an arm and a leg for three years ago and is arguably the top point guard in the game, is only one of a number of NBA stars this postseason that have gone down with injuries, yet only the Clippers seem to have come back stronger upon their star’s return.

Mike Conley missed three games for Memphis, John Wall has missed the last two for Washington, Paul Gasol missed Game 4 for Chicago, and Cleveland is without Kevin Love for the remainder of the season, though only Memphis was without an already-known commodity to fill the gap. (The Grizzlies started Nick Calethes in place of Conley for three games and were so impressed with him, they haven’t used him in the two games since.)

Sixteen years ago the eighth-seeded New York Knicks made a magical run to the NBA finals—though it wasn’t always a smooth ride.

Knicks franchise center Patrick Ewing tore his Achilles tendon in Game 2 of the 1999 Eastern Conference finals against Indiana, so head coach Jeff Van Gundy inserted the talented—yet underutilized—Marcus Camby into the starting lineup for the duration of the playoffs.

The then 25-year-old Camby, who had been acquired by the Knicks the summer before, had had trouble finding his way into Van Gundy’s rotation during the regular season—some believed it was due to his underwhelming practice habits. By the time the playoffs rolled around he finally was playing some regular minutes, though not in the starting lineup.

After Ewing’s injury though Camby’s minutes increased, as did his production. The 6-foot-11 power forward averaged 18.8 points, 11.8 rebounds, and 3.3 blocks a game in the final four games—three of them wins—against the Pacers as New York advanced to the NBA finals.

Needing a spark in the finals, Van Gundy finally inserted Camby into the starting lineup against San Antonio and their twin towers (David Robinson was still there alongside Tim Duncan).

Though the Spurs prevailed in five games, Camby was the breakout star, eventually becoming a full-time starter when Ewing was traded following the 1999–2000 season.

While Rivers’s breakout has helped improve the Clippers once-woeful bench, he might have to get used to being a top sixth-man—Los Angeles isn’t likely to deal Paul away anytime soon.